2016 was the year of the buzzword “diversity” from criticism within the fashion industry to even the Academy Awards. Many people were speaking out on seeking inclusion and diversity within many industries.

Gucci released its Pre-Fall 2017 campaign of videos that were all uploaded onto the brand’s official Instagram account, casting all-black models. Its casts feature: Akua, Abdulaye, Camille, Sharifa, Chauncey, Jonah, Alton, Zen and Franck. Each video has a model in a casting call, in hopes of making it to fashion week. The model answers a series of questions including “What’s your spirit animal?” and “What does it mean to have soul?” Afterwards, each is instructed to show off their fancy footwork.

Chauncey, 23. “My spirit animal is a tiger, I like the fact they are very observative and very vicious.” At the audition for the #GucciPreFall17 campaign, London, January 26, 2017.

All nine clips have unknown male and female models of many skin complexions and different hair textures which is incredibly important, especially in fashion and for representation. Fashion is widely known for celebrating Eurocentric beauty standards that many people of color cannot identify with. In July 2016, Calvin Klein model Ebonee Davis penned an open letter in Harpers Bazaar on the lack of diversity within fashion. “From the disproportionately low number of models of color walking in the shows (blacks make up less than 10 percent of models on the runway; models of color make up 24.75 percent).” She added, “To the lack of makeup artists trained to work on colored skin; from the mismatching of foundation to the burning and ripping out my hair.” Then later that year, Marc Jacobs closed Fashion Week with a grand finale of a show and then social media went into a tizzy accusing Jacobs of culture appropriation of the non-black models wearing dreadlocks. Gucci’s campaign could be using its platform to elevate a discussion on including a more diverse representation to a luxury brand, which hasn’t been done before.

According to The Cut, the casting was done by Midland Agency that has previously worked with Hood by Air and Eckhaus Latta. Gucci has not commented or released any information regarding the videos, however, this could be one of the few fashion houses to star only black models.

Check out the rest of the videos below.

Abdulaye. "Soul is what you bring to the table in terms of inner flair.” At the audition for the #GucciPreFall17 campaign, London, January 26, 2017.

Sharifa, 22. “My spirit animal would be… you know baby giraffes they can be a bit awkward sometimes because they are growing into their legs.” At the audition for the #GucciPreFall17 campaign, London, January 26, 2017

Akua. Why is the bumblebee your spirit animal? “Because it creates things that are sweet and represent sensuality as well as pollinating new life.” At the audition for the #GucciPreFall17 campaign, London, January 26, 2017.

Jonah. What’s your spirit animal? “A bull because that’s my birth sign, so I consider that my spirit animal.” At the audition for the #GucciPreFall17 campaign, London, January 26, 2017.

Zen. What’s your spirit animal? “A dolphin because a dolphin is very intelligent, I would say a tiger but that’s so cliché.” At the audition for the #GucciPreFall17 campaign, London, January 26, 2017. 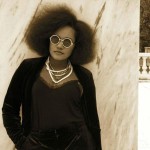 Brittny is a native New Yorker who somehow wound up in Cleveland, Ohio. She is an avid live-tweeter of the Real Housewives, a lover of all things sequins and pop culture. She has written for The Village Voice, LA Weekly, The Boombox, HelloGiggles and Bustle.
Connect with me: