Assuming that exercise and extremely cool yoga poses that look incredibly hard to do, are only for a specific type of woman is something we’re wishing would come to an end…like now. Exercise has no size. The notion that curvy women are inhibited by their own bodies is so completely ridiculous and false that you would think there can’t be many people who think that way, but unfortunately there are.

Look on any social media platform and there are yogis selling a new active wear line with ripped abs, perfectly contoured cheeks and not a drop of sweat. And while we may be smart enough to know that most of those things are staged and not even real in the first place, social media has fooled people into thinking that yoga is only for those with a “trimmed” butt, perfect poses, and a certain body shape. 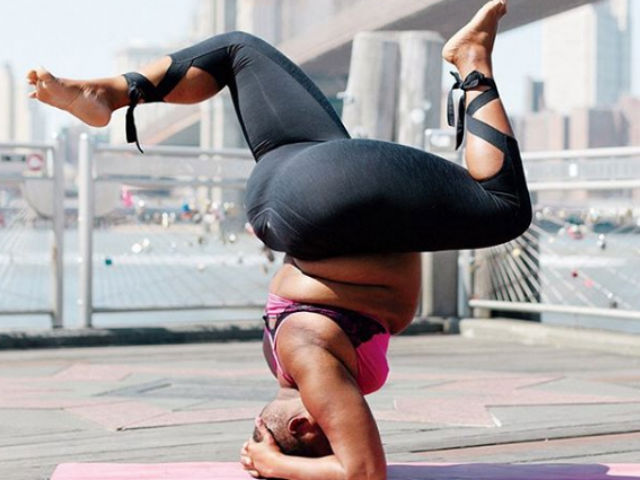 Jessamyn doing her thing per usual.

In an interview with Stuff Co, yoga teacher Birgitte Kouba admitted, “Modern media has perpetuated an untrue perception that only a certain type of person, with a particular body type, does and can practice yoga. I felt this incredible looming stereotype of what a yogi is. I didn’t identify physically with the person,” she said. Women like Jessamyn (seen above) and Valerie Sagun have been extremely instrumental in sharing their stories about yoga and stressing that’s it’s more so about mental health than anything.

The bottom line is that yoga should be accessible to women of all shapes and sizes, even if that makes your classmates uncomfortable and you aren’t wearing the Lululemon uniform everyone else is wearing. It’s ironic to see what most people think of as a spiritual healing ritual and place of peace as a place that also has made room for body shaming—and while there are disagreements as to if women should go do specific yoga studios for curvy women or just join in your own local class, I’d like to think that women should freely be able to choose whatever makes them feel most comfortable, and where they aren’t ashamed to be themselves.