Brilliant Artist’s Series Examines Dangers of Our Cultural Obsession With Weight
by Amanda Thomas | May 18, 2016 at 1:24 PM

Saturday night, my roommate and his boyfriend came to my room to say a quick hello. We chatted about my room decor for a bit and then they started to leave when they noticed my Fitbit scale in the corner. They immediately stopped and began taking turns on the scale. Stepping on and off, each of them, hoping to get a different number each time, mumbling to themselves that they thought the numbers would be different. When the merry-go-round had become exhausting and the results never changed, they turned around in unison and said “we will be back” before walking out of my room.

For some, scales and the numbers they show at times are more precious than the winning numbers in a lotto, or more soul crushing than the amount of national student debt. In reality, these numbers only reflect our gravitational pull to the earth. These numbers don’t predict how successful we will be, or how much fun we will have on vacation,  yet some of us covet the scale like a magic 8 ball.

So I was pleased to see Cleveland-based artist Dawn Hanson’s newest series on weight obsession, on view starting this Friday at Re/Dress boutique in Ohio according to the exhibition’s Facebook Page. No Weigh A collection of Altered Scales, is a series of restored vintage scales with a collage of objects on top, making the otherwise functional scale not functional. Each scale is crafted with a different item that is seen as dangerous, like nails, push pins, or mouse traps.

In Hanson’s artist statement she said,”While each scale has been carefully restored to working condition, they are no longer functional for the purposes of measuring pounds or more importantly a person’s worth. Now, they serve only to convey a cautionary take of the dangers of being obsessed with weight.”

Our relationship with the scale shouldn’t dictate how we feel about ourselves at all, and Hanson’s work is a stunning visual representation of what can happen when our obsession with the scale takes a dangerous turn. The work puts the scale into perspective, that it’s just a piece of metal that if not handled healthily, is a weapon against our well-being. 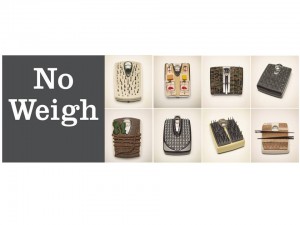