Precious Lee Wants Designers to Cut the Bull: ‘Don’t Say It’s About a Sample Size, You Have an Entire Year to Make Clothes’
by Ashley Hoffman | May 9, 2016 at 6:23 PM

You don’t need a news outlet to tell you this, but Precious Lee is cleansing a lot of eyes with her unapologetic radiance. She’s also everywhere right now like serving bombshell realness for SwimsuitsForAll, being the first woman of color who wears a size 14 bikini to appear in a Sports Illustrated ad, and she wrote a misconception busting piece for Motto about why assuming curvy women are unhappy is nutballs.

And there she was today in hot pink pants and an eventually kiss-smeared ruffly electrifying yellow top at the Christian Siriano for Lane Bryant show, so we chatted her up about tired beauty standards and how she’s just killing the game in general. Fun fact: her voice was silky smooth as she talked for awhile about how her house was a confident house. Cheerleading. Volleyball. Homecoming queen. But she also cares deeply about the torment people live when they can’t see themselves in the images we all know are glorified on the daily. She told us she would very much like people to stop relying on the “but we can’t because sample size” excuse when they refuse to take size diversity for a spin, and she wants to see people from more backgrounds too.

Here, she speaks very interestingly about why there’s no excuse not to feature women of larger sizes in beauty campaigns, why women like Kerry Washington calling out Photoshopping is important, and for the first time, she tells RunwayRiot about how she’s been dabbling in design. You know, to make women feel good.

I noticed you posted about the Tracee Ellis Ross video. Can you talk about your feelings about beauty and manipulation?
I really enjoyed seeing that video at that time especially because on Sundays for some reason, I get into this feeling of a Super Soul Sunday or soul food Sunday, and I like to post something where I say something super empowering or just something that hits me within that arena and I ran across that video and I really enjoyed hearing a woman that’s been in the industry for this long, a black woman, to be talking about how a lot of people feel, but just don’t say. Yes you can be sexy and you can do whatever you want with your body, but it’s just the exploitation of people and women who are really really young and haven’t even formed their opinion about their bodies yet to feel like they have to look a certain way, or they have to get this done or that done. It was really important for me because I consider myself a body advocate that I share with my followers.

What about it in particular really struck you?
People trying to manipulate their bodies into something that it isn’t and it isn’t supposed to be because it’s not natural. Not only is it not there, you have these unrealistic expectations and this warped reality of thinking that this is the prototype for a body and your waist should be like this and your arms should be like this and your thighs should look like this, when in actuality, you see those people, and they are super super super Photoshopped, they have body doubles. There’s so many things that go on behind the scenes that people don’t know for just that one picture or just that one shot in a video or that movie, and it’s important for me to remember that even though I see a lot of the behind the scenes as a model, but I remember growing up and not knowing the in’s and out’s and I know there other girls as well and it’s important to let them know that yes, to make a beautiful picture, you can explore with saturation and color and brightness, and there is an art to Photoshopping and editing a picture to the way you want it to look, but it’s important to let people know that that is an art, and that things can be manipulated but that doesn’t mean that’s the way it is and everybody should strive to be like that because that isn’t natural. It was really cool to hear someone n the industry saying that. Not only do you not have to look like this, it’s not normal to look like this, they don’t even look like this. 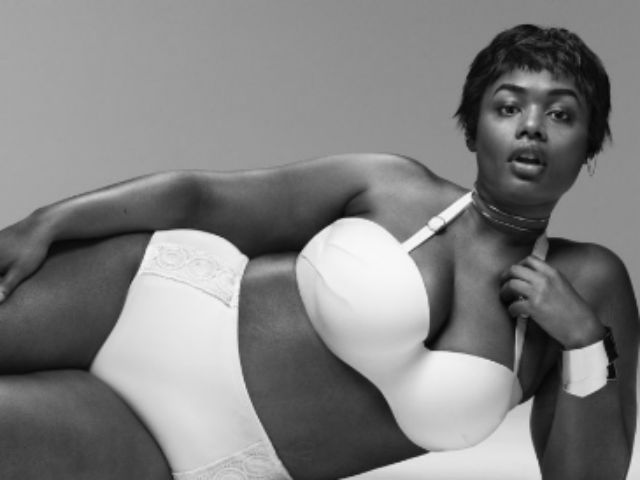 Were you affected at all by beauty ideals?
Well, I’m really fortunate to have had a really strong upbringing. I was really confident. That’s how it was in my house. Being confident was like brushing your teeth. I’m so happy that I had that, but I meet so many people, and I know that everybody didn’t have that. So I, of course, still had certain things that I wasn’t 100% sure about as a kid. But I always knew that everything that I saw wasn’t everything that it was. Everybody doesn’t always remember that. I was 16 before, I was a cheerleader, volleyball, and I was homecoming queen, but I was also always plus. I was a larger girl. Me being happy and being confident encouraged everybody around me to do it, even my closest friends who didn’t have a bad self-image, but you know how girls can get. You get in a room and somebody complains about not working out or their thighs and then the whole room is talking about thighs. I try to stay away from that. I had a good grip on not falling too low. Everybody has a bad day. Nobody can sit here and tell you that they don’t have a day where they’re just over it. Every day you don’t love your body the same amount, but everybody should love their body.

What specifically would you like to see in fashion?
I would like to see fashion and beauty really open up beyond making it a “thing.” Oh it’s the special edition, or it’s a this or it’s a that. I was talking to someone else about how they say, the reason why you don’t see models on the runway who are plus is because of the sample size. Well what about beauty? What about hair? You shouldn’t have to have a certain size to do a cosmetics ad, but those are the questions we need to ask to people who answer them Yes, I believe everyone should have creative control over their house of fashion and I respect that, and I respect people’s visions, but I feel like it’s a responsibility for people like designers and huge corporations that influence the masses to show the people who are buying their stuff. A lot of people don’t know you can get certain designers in a size 22 straight off the runway because you’ll never know because they don’t use them in the advertisements. What I want to see is people to completely remove the bull, and let’s just all be honest. If you don’t want to use a curvy girl, don’t say it’s something about a sample size, because you have an entire year to make clothes. I think it will happen, and it will be really exciting to see the next big designer to do it.

Who else needs more repping?
You know, diversifying an entire industry based on size, background, race, it’s all important, the average sized woman is a size 14, but you have so many different ethnicities that have to be represented. You have so many different things. People are looking at all the things we’re producing, and if you see something over and over again that’s being glorified and no one who looks like you is being included, that affects you, especially at a young age. It’s really petrifying to think about my child raising a family and having to deal with girls who have no idea how to deal with themselves because the media has not embraced them. It’ll be more prosperous for these designers to include larger women and women of different backgrounds.

How do you feel about celebrities like Kerry Washington calling out times when she’s been Photoshopped?
It’s important because there’s nothing wrong with makeup or bronzing or whatever it is you’re doing to yourself that makes you think you’re perfecting yourself. The problem, I believe, is that when people think that’s what’s required to be beautiful. It’s overdone in the sense that a lot of impressionable young women see that. Granted, we can’t say and do everything we want to, but it’s important for Kerry Washington to say stuff like that. To show that even that at that level, they still care about how they’re being perceived for the sake of women to know that this is not the norm, and this isn’t me, and if you thought this was me, I’m letting you know that this is not because it’s not cool because they didn’t even tell me it wasn’t going to be me.

Your poses are so smoldering. What do you think about when you channel the sexy?
I’m very much aware of my angles and my body. I love my hourglass so I always do something to accentuate my waist. It’s just getting to know your body and finding out what pictures you like. Looking at pictures you like of yourself, what are you doing the most?

What’s your next career move?
The sky is def the limit. I love to write, and I’ve been writing. I’ve dabbled in designing. Wow, this is the first time I’ve ever said that out loud, but I’m really excited about it because I love to make over people. If I could do something to make people gain a little confidence with just a look or beauty or hair, so I’m definitely going to be exploring things. 2016 even though it’s five months in, we have a lot more to kick off in store.