Talking to New Model Osha Waiters About Busting Out of Her Comfort Zone
by Ashley Hoffman | March 30, 2016 at 11:53 AM

When Osha Waiters jumps, she shoots her endless curls two feet into the air. It’s a natural move for her, but she’s new to modeling, and she’s still practicing holding her head high.

“You have to be really confident, and I’m still a little self-conscious,” she says about runway auditions. “You have to keep your back straight, your head up, and growing up I used to have my head down and not walk straight, and sometimes, I get a lot of attention in the street, and so I bundle up.”

The 24-year-old streetstyle chameleon is signed to Bridge Models and she’s worn some liquefyingly hot getup like leather pants, see-through lingerie, and skin-tight cream-colored bodysuits for Eyeko — she’s got more bookings in store for this May. Such opportunities test her old ache to cover herself up. But after posting her pictures more and more since the MySpace age, people have been writing her notes about how she’s helped them appreciate their bodies. Appreciative is also a good way to describe how she feels. The things she says about her body of work are humble, but they have far-reaching implications.

Her looks are true barrier busters, and Osha has shown herself to have a deft hand when it comes to capturing women with a camera herself. As a photographer, she elicits vivid, complicated portraits of ferociously sexy women you’d like to see more of. A trip through her own fashion pictures are a nuanced character study in someone who loves her shape, and that’s another thing that’s evolved along with her.

RunwayRiot spoke with the East Harlem model about feeling more comfortable being “thicker,” rummaging for vintage, and why brands should make the exact same straight-size threads for everyone.

First question. You’ve described yourself your shy and introverted – how has that helped you?
Well being shy and introverted helped me by observing more, and paying more close attention. It’s made me more aware, and as I got older I broke out of my shell little by little.

What’s a downside to that as a model?
The downside is not being 100% comfortable shooting. Sometimes I’m a little self-conscious with myself. I’ve definitely come along way. I used to be afraid to show off my body, even in a swimsuit or anything. I didn’t want to go out in public. Now it’s easier for me. I’m getting better and better. 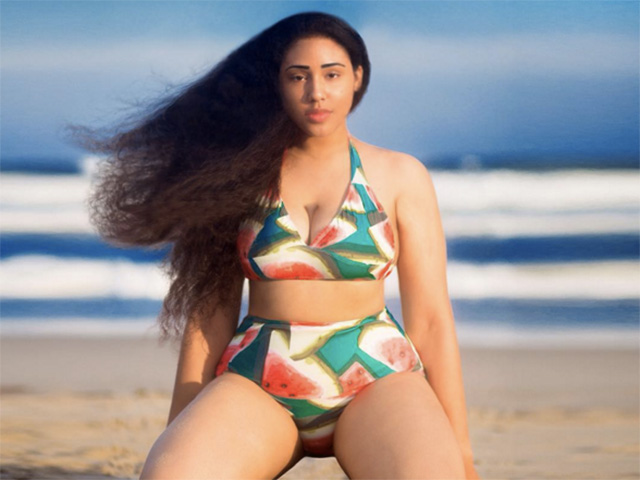 Can you talk more about how you used to feel before things got easier?
Growing up, swimsuit season, I did go out, but I didn’t want to participate in that stuff. I’d wear a shirt over my swimsuit. When I was younger, I was the biggest girl when I hung out so I would get made fun of. They’d say, ‘why are your thighs big’? or they’d make jokes. I wasn’t really that big, just a little on the thicker side. I just wanted to cover up.

What convinced you to show off your body more?
When I first posted some pictures on the internet, I was really shy, nobody new me. I was the quiet girl, but when I would post, I’d get so many positive comments and people actually liked it. It made feel comfortable, and as I posted more pictures, I felt better.

I see. So what’s one compliment you treasure?
When I get paragraphs written to me. When people take the time out of their lives to give me a whole long paragraph about how I’m a big inspiration, how I’ve helped them appreciate their body, then that’s meaningful to me. 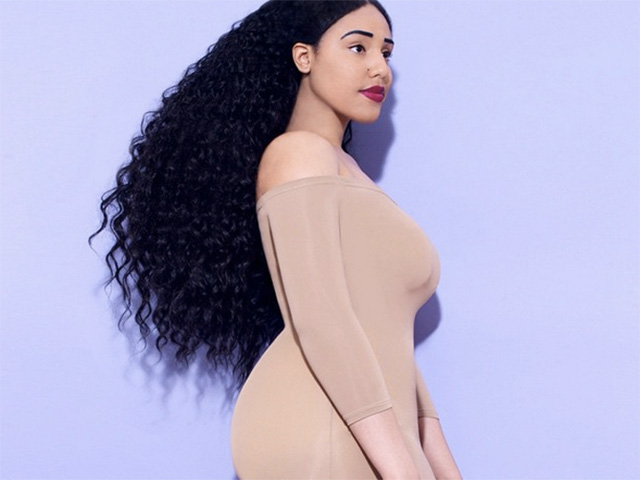 In your pictures, you capture the movement of your hair. Are there things you notice in a picture that you wouldn’t in the mirror?
Definitely. I jump around, it’s really interesting to capture the shapes and forms that it makes in photographs that I notice. I have shots of my hair in the air. I find it better than laying flat. 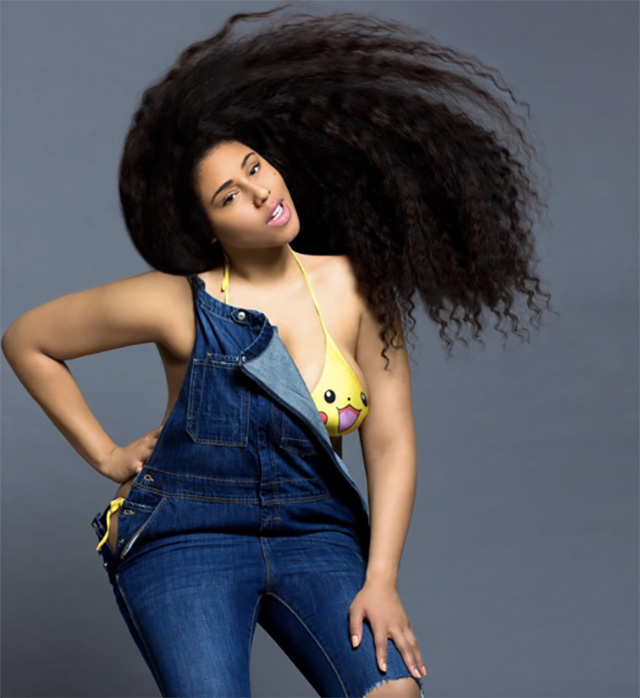 What’s the most persistent feeling you have about your hair?
Mostly, I love it. I used to wear it straight all the time, but the big curly is my signature look. If I wear my hair straight, I would look so different. The curls add character.

From your view, where do you think major campaigns are at with showcasing beauty?
It’s getting more accepting of different looks. I’m starting to see women with natural hair big curly hair, different features, they’re getting there, showing more diversity. Still a little ways to go, but seeing a little difference. 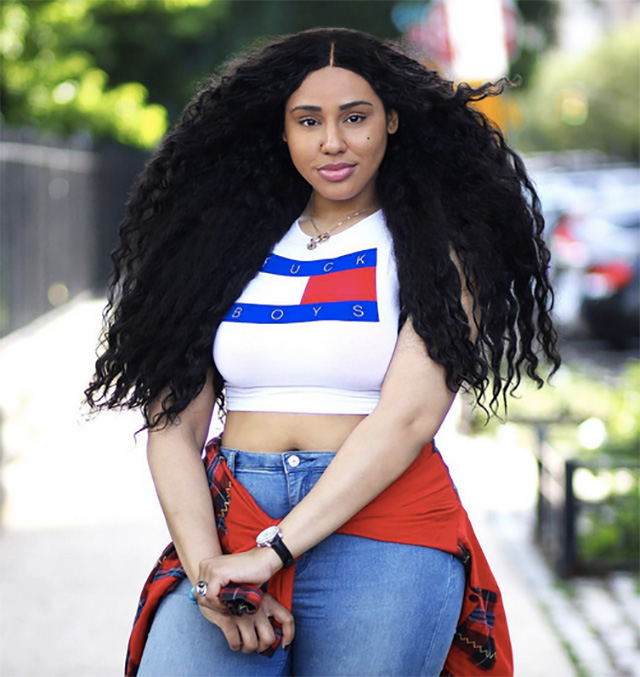 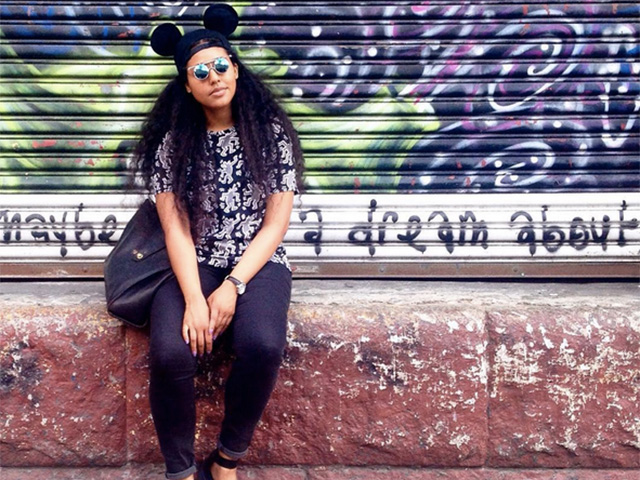 How has how you feel about your look influenced your experience been with casting calls?
I went on a couple, I went to a casting for runway, which I never did runway before. You have to walk so I learned that. You have to be really confident, and I’m still a little self-conscious. You have to keep your back straight, your head up, and growing up I used to have my head down and not walk straight, and sometimes, I get a lot of attention in the street, and so I bundle up.

I’ve seen you dress sexy, witch, streetwear, have you observed a correlation in how you feel what you’re wearing?
Actually sometimes it’s my mood, because I like to take pictures, if I have a vision in my head, I put outfits together in my head, and then I try it out, and see what it looks like, and just put the pieces together for that day. 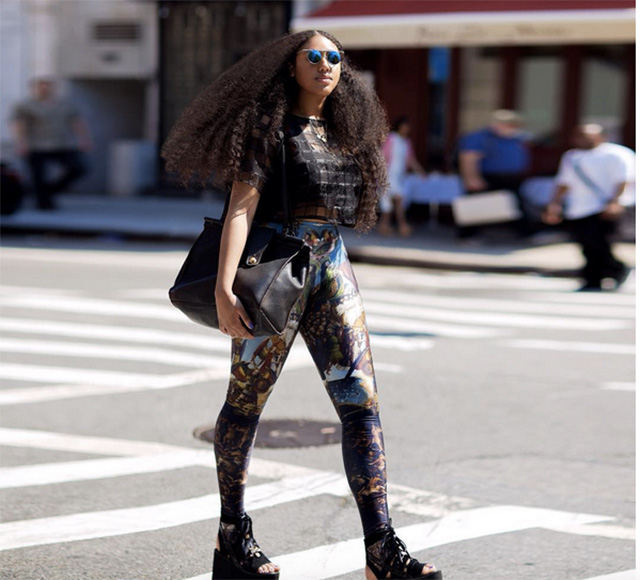 How has your body changed over time?
I was smaller, a couple of years I was much smaller, I gained about 20 or 40 pounds, I don’t really weigh myself, but I did gain weight over the last couple of years, but I’m still well-proportioned, still happy with myself. 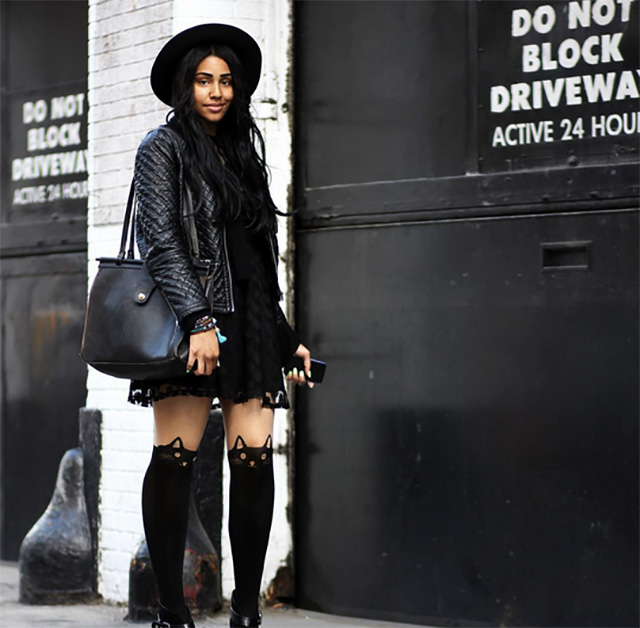 How does your current shape sit with you?
I love it. The only frustrating thing is finding clothes that fit. It’s hard only because of fashion. I like to wear things, but sometimes I wouldn’t be able to wear it. That’s the only thing I hated about it. It’s kind of depressing, when I was younger I would say, ‘I’m going to lose wight for this one item,’ but that doesn’t make sense at all. Sometimes it hurts, I try to find alternatives from plus clothing. 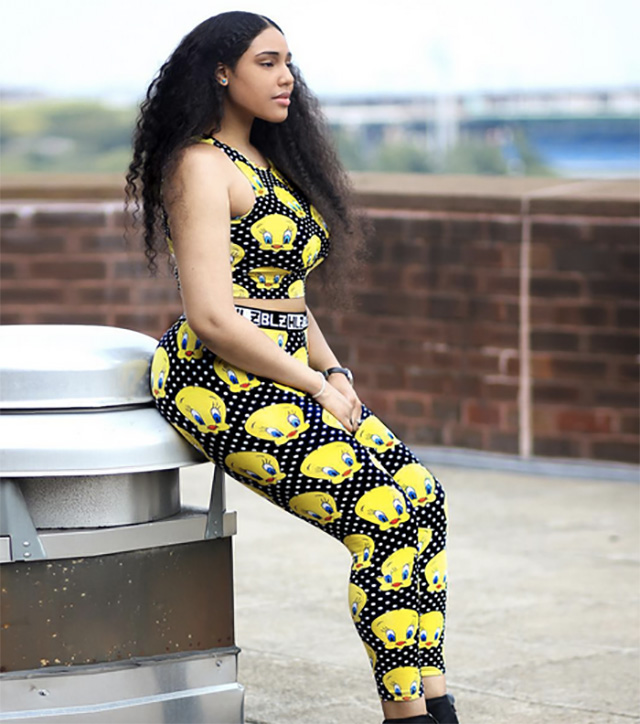 Osha in a Tweety set and Nike kicks.