Just Leave Britney Alone Already With These Photoshop Accusations
by Ashley Hoffman | March 22, 2016 at 8:43 AM

Britney Spears is still causing a silly Photoshop fail debate more important than Inherit the Wind after sharing a photo of herself of her latest paradise she’s visiting.

In the pictures she shared yesterday, Britney’s lounging like the queen she is next to a serene body of water in the most chillaxiest of poses. And in another delightful moment of people weighing in on someone else’s bod, Instagram has inevitably come for the world’s nicest person on the internet saying that she’s photoshopping her waist to look slimmer, and thusly, they say she is forwarding the cause of totally unrealistic body role models, ruining lives, and proving that she really doesn’t like her look, to the nine million people who rely on her for life inspo.

The micro scholars of the internet say they believe the blue under her back to be fake, or the pavement looks weird, and the waist is a HELLA different than the waist IRL. But before you decide that Britney Spears really altered her public image, where’s the definitive proof? Is there really any irrefutable fun house imagery to warrant all these people tearing her apart or the news of these accusations flooding the news?

Even experts have no way of definitely validating whether this is a fine piece of accurate photojournalism or not, but it’s highly possible that she trained hard, stretched out, sucked in her stomach, and enjoyed a ton of edamame witha frappucino afterward. Let’s remember, this is the woman who did 1,000 crunches “on a really good day,” and led her own gym class. Most of her pictures she posts are on the silly, decidedly not braggy or self-serious side. Here’s evidence of her engaging in behavior associated with exercise here. 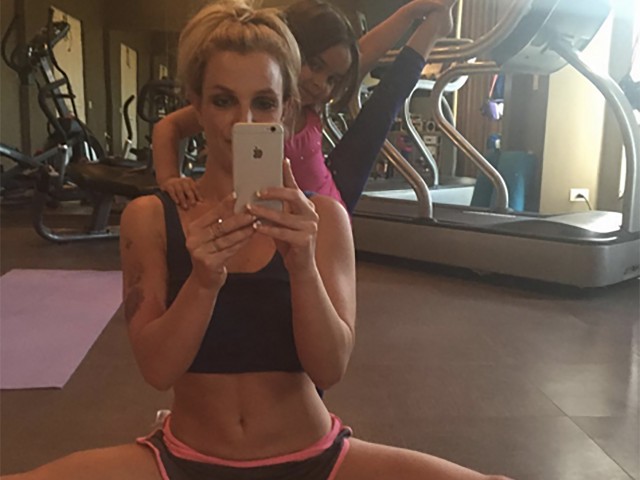 We’ve been here with Beyonce, and countless others, but in the case of Britney Spears, her comeback (which many credited her newly abs for,) was extremely public. (We’re talking about after she put on some weight and sang “Gimme More.”) It all makes deciding she’s succumbed to dysmorphia without hard proof extra dumb. And who hasn’t had a comeback that didn’t even involve working on your body? Also, remember when Chuck Klosterman decided Britney was basically successful because of pervy old men liked how she dressed in revealing clothing in that Esquire profile? Seriously, can’t we just leave her bod alone already?

Whatever happened or didn’t happen to this super toned photo, it’s her prerogative, and we will forever be in her debt for every, single, song she made. Is it important for women in the public eye to share images that promote body acceptance — “warts and all” — yes it is. But does all this analysis prove people need more demanding careers? Yes it does, and these accusations need to end already.