“It Works! Have You Tried This Crazy Wrap Thing?” might sound like any number of nefariously bogus ads promising a slimmer you, but it’s the slogan from It Works! a multi-million dollar network direct marketing company that sells herbal body wraps, creams and vitamins that promise to “tighten,” “tone,” and “firm.”

Of all their products including “fat fighter pills,” it’s their body wraps that get the customers in the virtual door.

Here’s what the the body wrap does, according to the site. “Wrap your body right when you secure the Ultimate Body Applicator (trademarked) in place with Fab Wrap! Soft, breathable, and hypoallergenic, the self-clinging Fab Wrap ensures that crazy wrap thing is flush to your skin for the best tightening, toning, and firming results!” (The disclaimer warns that individual results will vary, and that the claims haven’t been clinically proven or evaluated by the FDA.)

RunwayRiot spoke to doctor and leading weight loss expert Dr. Michael Kaplan over the phone, and according to Kaplan, wraps like these can make people lose water in the area where they wrap, but then the body will quickly return right back to the pre-wrap shape the moment they eat or drink something.

IT WORKS! IS A TOP REVENUE COMPANY

Still, these are some popular products. Mark Pentecost founded the company in Palmetto, Florida, in 2001, and according to the numbers reported by Inc., It Works! earned $538.5 million in revenue in 2015. In 2014, Inc. magazine ranked the company #436 among the 5,000 fastest growing companies, and in 2015, It Works! landed (lower,) at #445 among Inc.’s annual rankings. Direct Selling News magazine, a publication for the direct selling industry, ranked It Works! 15th on its North America 50 list and 31st on its sixth annual global 100 list. According to Forbes, Pentecost recently purchased Little Bokeelia Island, a private island off the west coast of Florida spanning 104 acres for $14.5 million.

THE WRAPRENEURS WHO SPREAD THE WORD

A staggering number of women on YouTube, Facebook, Instagram, and Pinterest swear the wrap performs as advertised. Based on the endless personal reviews that we saw online, the majority of the people who say they lost inches by rolling the green bandages onto their waists over the wraps appear to be women. Some of these women say they are It Works! distributors, which the company calls their “wrapreneurs.” The enterprising marketers follow and approach women on social media to deliver the message that the wraps can give you a tightened, toned, firmer body part in “as little as 45 minutes,” the time it takes to watch a whole aerobics video without moving.

It Works! operates on a multi-prong rewards system. One way an It Works! distributor can earn a percentage of the profits is by reviewing the product on social media. It Works! also pays its salespeople with cash bonuses and commissions, in addition to the profits from sales they can earn for sharing positive reviews of the products. Like an Avon lady, except one who posts before and after pictures showing her slimmer waist with fire emojis. According to a distributor with whom we spoke, the women have a variety of professional backgrounds, but they’re all passionate about sharing how they themselves saw lasting results with the It Works! applicator.

To join the marketing team, you need to buy a $99 starter kit, and then you need to spend a predetermined amount on their products monthly, host It Works! parties and promote the products on social media. The It Works! site has a lengthy list of testimonials from women and couples about how lucrative slinging their applicators are. The only non-affiliate “news” review the company links to on their site is from Make Her Up, but the post appears to have been taken down. 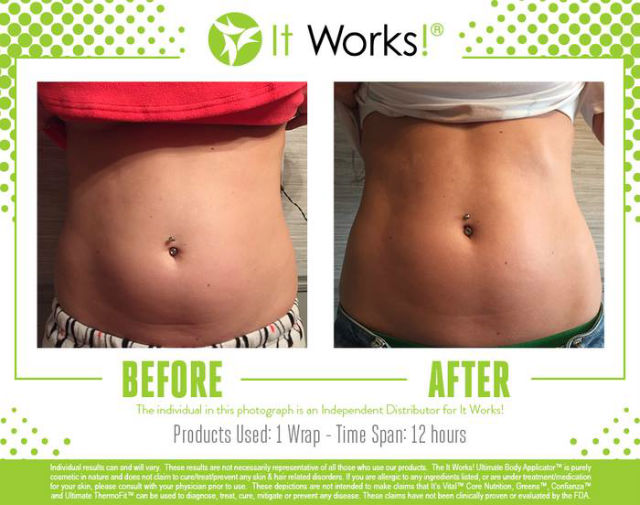 A before after picture from the It Works! Facebook page, where you’ll find their products and also an inspirational quote from Dr. Martin Luther King Jr.

Speaking to RunwayRiot over the phone, Amanda Hansen, a mother and an It Works! distributor based in Frisco, Texas explained how the It Works! body wrap works.

She said: “It’s infused with all these natural botanical essential oils, yummy herbs and things like that penetrate your skin, and mainly what it does is lipolysis. I’m so not technical that way, but literally, it will go into your fat cells and detoxify them. That’s why you see sometimes, people get smaller. That’s not something that we can claim. We can’t be an FDA approved company because we’re a natural company.”

What’s it made of? Specifically she mentioned “rosemary, eucalyptus, menthol, among other things,” and that it smells like Vicks VapoRub.

Hansen stressed that It Works! works as long as you have healthy habits. If it doesn’t work for you, you may be doing it wrong, she suggests. “We can’t guarantee results of course. I can’t sit there with you and tell you to drink water and eat healthier. Most of my clients get really good results and love what they see.” 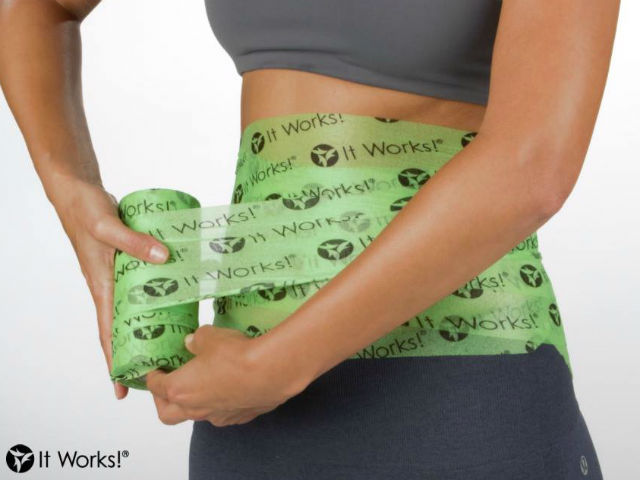 The company calls their distributors “Wrapreneurs.”

Reached by phone, Dr. Michael Kaplan, chief medical officer of Obesity Management Systems, and a leader in the weight loss industry in Long Island, New York said that the people who experience visible results with wraps are seeing a temporary change from sweating the area.

“That’s like something snake oil salesman have been reinventing for fifty or a hundred years,” he said. “If you wrap something, you tend to lose water in that area and of course, you look thinner, but you’re not going to see significant weight loss. You might look lighter because you lost some water, but as soon as you go back to eating and drinking, your body will go back to the way it was.”

Kaplan explained the science behind why wrapping your body makes you look slimmer.

“What happens is the skin cells underneath will sweat. It’ll make you sweat because it doesn’t allow you to breathe. You’ll lose liquid there and salt there. Sweat is kind of like saline. When you wrap the area, that area will look tighter and thinner. The dermis will contract temporarily, until you take the wrap off, eat or drink something. It’s almost like a girdle. It’s that same kind of concept that will make you look thinner temporarily, but then everything goes back. You’re sweating more there than the rest of the body and it just dehydrates that tissue.”

Hansen said that It Works! will continue to work for three days provided the customers eat healthy and drink water, and that though results vary, they can last from three to six months.

“We do definitely suggest trying to lead a healthier lifestyle. Avoid salty things, sugary things, artificial things, all of that yucky stuff that usually people eat sometimes. But realistically, if you’re drinking water, the wrap continues to work for 72 hours. Really, it can last indefinitely if you’re doing well. We also have a defining gel and I use that I even maintain that helps a lot.”

According to Kaplan, the slimmer appearance can’t last more than a day.

“Even body builders still do it today to look good before a competition. It’s not real weight loss. It’s more about body sculpting your appearance. It’s going to go back within eight to twelve hours surely, it’s going to go back, if they’re eating and drinking, unless you’re starving yourself. ”

He added that when it comes to weight loss, wrapping is not the way.

“It sends the wrong message to people, that they should be doing this kind of treatment to feel better about their appearance. I think that people should do things in a more natural way,” he said.

But Hansen is a loyal customer. She said: “People lose 1-3 inches to their upper middle and lower stomach after applying the wrap. After I wrapped, I didn’t have to wrap again until I got pregnant with another baby.”

She proceeded to explain why she is a devotee.

“I tried my first wrap, and I didn’t know what was supposed to happen. I put it on for 45 minutes. I saw no results. I told my ‘husband, honey, I wasted our money,’ and I went to bed so mad. But when I woke up, I felt like half of my body had left itself. I’d had three kids, and it helps with stretch marks, cellulite, and it has tightened and toned and firmed things for me. I absolutely love what it’s done for my body after having babies. I will cheer this product on until I die.”

Follow the instructions, she says, and it will work.

“Most people I talk to are skeptical,” Hansen explains. “How could you not be? You have those people that don’t follow the steps and don’t have a good experience and don’t get what they want. You can’t eat pizza and brownies and alcohol and expect to see results.” 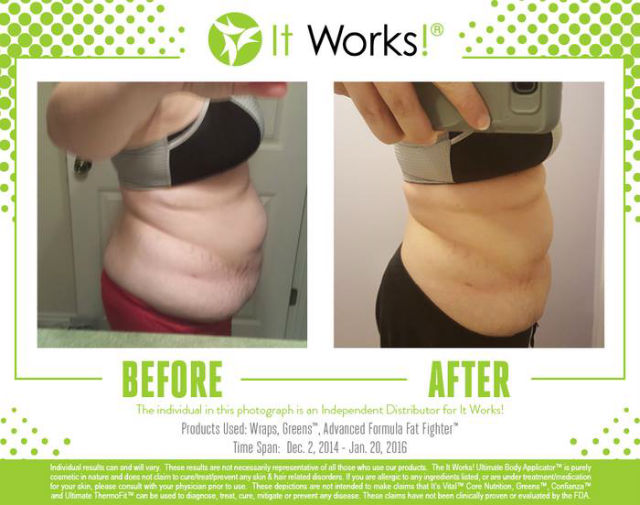 It Works! is a top revenue company. Photo courtesy of the It Works! Facebook page.

WHEN IT WORKS! DID NOT WORK


Skeptical was how Cheyenne Hernandez, 18, who lives in Azusa, California, felt when she looked at the body transformations the It Works! distributors she followed posted over the course of their three-month trials. Even though she said it didn’t seem realistic to her, she still wanted to try it. So she spent $101 on the wraps and tried using them for three months, and for three months she wrapped as directed, and exercised.

The It Works! wraps made her skin shiny and oily. They made her clothes smell. They made her cold and tingly for roughly thirty minutes, but according to her, they didn’t make her look like the women in the after pictures.

“There wasn’t any difference in my body shape at all. I did everything as instructed as the directions say,” Hernandez said. “The pictures showed that I should’ve had a drastic difference in my body, which I didn’t. I knew then that I just wasted my money on a wrap that smelled like strong Vaseline.”

According to Hernandez, she’s only seen raves from the distributors.

“The only people who have told me that it actually works are the distributors themselves. I have yet to actually have a customer tell me that it does work. None of them are sponsored. They only work for the It Works! company, but I’ve never seen one negative post from them about the product.”

So does It Works! actually work? That’s beside the point. Telling everyone it does is working.

RunwayRiot reached out with questions numerous times to It Works! but we did not hear back.

Tags: Weight Loss
About the Author