Except, after browsing the app’s website, I was feeling majorly ticked off. The happy little homepage says “Big girls, you’ve got more admirers than you think.” COOL? Okay, seriously. Hang on while I get over the whiplash I just got from the earth-shattering knowledge that other people find curvy women attractive.

Okay, I’m over it. Obviously that was enough to make me say “bye,” but I kept scrolling out of curiosity. The site is peppered with isolating lines such as, ” Curvy people can use this app to send private chat messages to attractive large singles” and “No matter what your interests are, WooPlus App always helps you find and date with the people you like most: BBWs, BHMs, wooers of fat people and so on.”  Really with the “wooers of fat people”? Was there any way they could possibly make a WooPlus user feel more like an alien in the dating landscape?

Apparently so. There’s also this screenshot of a girl who was just IN SHOCK that anyone on a dating app would give her a second glance. 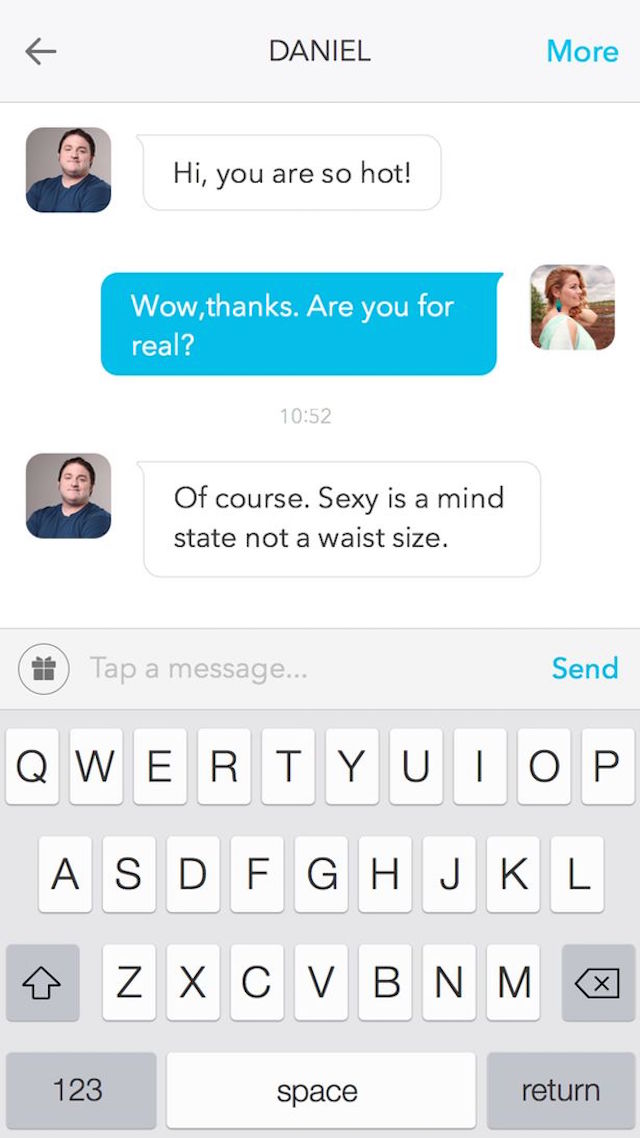 Thank you for your definition of “sexy,” Daniel.

This app seems really well-intentioned, don’t get me wrong. Body shaming is real and it sucks.  But is building an app that’s based off of the insane idea that people find curvy women attractive really a good strategy? I’m gonna go with no.

Sure, it’s great to have a safe space where people won’t use adjectives like ‘hippo’ to comment on your appearance, but the way this app is framed is kind of the worst. It’s basically one big billboard of a reminder that having curves is not preferable to the rest of the population that hangs around on Tinder. Cool. Did we really need an app for that? Nah.

Dating apps were never really my game, and this one definitely doesn’t change that, so I’m swiping left on this one or whatever.