The Daily Mail Threw a Parade Because Melissa McCarthy Slimmed Down
by Ashley Hoffman | December 10, 2015 at 9:17 AM

The Daily Mail is all aflutter over Melissa McCarthy‘s festive new campaign for her inclusive clothing line Seven7. She has slimmed down, and they’re jacked up about it.

Ever the exuberant capturers of every possible human emotion in photographs, the Daily Mail has offered a smattering of exclamations about McCarthy’s life change. Here they are in order.

On how she lost weight and it’s impressive, and she’s happy:

Actress Melissa McCarthy is happily flaunting her impressive weight loss as she models a series of cute ensembles in a new Christmas-themed campaign for her plus-size clothing collection.

On how this is an improvement:

The 45-year-old actress-turned-designer looks better than ever in the latest ad campaign for Melissa McCarthy Seven7, showing off her trimmed-down physique while showcasing a number of her favorite designs from the holiday collection.

On how she doesn’t even look like her old self when she was at a higher weight, and it’s convenient now that she’s a model:

The Bridesmaids star looks almost unrecognizable as she takes on the role of model, having reportedly reached her goal of losing 50lbs in June of this year.

On how she reached her loss goal of 50 pounds.

Melissa seems to be looking even slimmer these days that earlier this year when she reportedly reached her weight loss goal of 50lbs.

On how she doesn’t even look like herself anymore and it’s impressive:

Happy as can be: The actress looks almost unrecognizable in the new shoot, having lost an impressive 50lbs 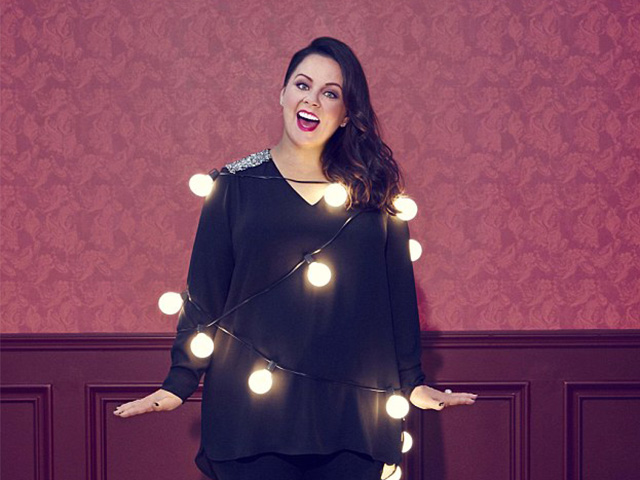 At least they didn’t say she’s less funny. Any thoughts on the clothes? We think the brand sounds like a failed boy band, but it’s very well-intentioned.