Meet Lizzo the Singer Who Thinks It’s Crazy We’re Still Missing the Point About Size
by Ashley Hoffman | November 19, 2015 at 8:17 AM

Who’s that luminescent looking woman whose soon to be released song about accepting your body riffs on Beyoncé’s “I Woke Up Like This”? It’s Minneapolis singer Lizzo, who actually set a speaker on fire with her voice at South by Southwest. A classically trained musician, Lizzo is a real-talking lightning rod. Her songs tackle the work of self-love from somewhere wrenched from deep in her Houston soul. Lizzo has an unbridled conviction about why her own message is still needed at a time when Gigi Hadid gets body shamed. RunwayRiot talked to her about finding her voice, and she made it quite clear that she’s done with size discrimination. Bonus: she dresses cool so she might just be your new favorite.

In your music, you actually acknowledge the dynamic between self-hate and self-love, can you talk about why you do that?
Acknowledging self-hate is important in order to get to that next level of starting to love yourself. You have these things about yourself you want to change and you can’t hide from it. When I used to want to change things about myself, I’d say, ‘oh I wish smaller here and my butt bigger was here,’ and I wish that I was Sailor Moon. It was so ridiculous. I’m not going to wake up as a Japanese anime character [laughs.]

That’s funny. A cartoon character is a pretty unattainable body ideal. So what do you remember about starting to love parts of yourself?
Once I realized I was able to say it out loud, the things that I loved about myself, it was therapeutic. You get over it.

How have your feelings toward your own size evolved?
I’ve accepted my size so many times, over and over again. Sometimes you un-accept it, sometimes you’re in a store, and something doesn’t fit. But I know I look good and I’m healthy on the inside.

So why not just sing about feeling sexy? Self-acceptance certainly hooks a lot of people. How dependent has the success of your musical storytelling been on your background with the insecurities you’ve felt?
That’s a great question. It’s funny you’d think a pop star would get a lot of attention just talking about love in a pop song, but I’m doing what’s so personal to me. I mean the fact that it’s gotten me to where I am because its affected people in the way it has is really cool. I don’t have to make something up. It’s connected with people. People of color gravitate toward me who aren’t overweight and there’s men too, through the story you feel in the music.

Where are we at with size in the media from your vantage point?
It’s such an annoying thing.

How about Ashley Graham being a Victoria’s Secret angel? She’s a size 14. She should be one.

Even people who are heavier have this debate. People still don’t think big people are pretty, and I’m over it. That’s actually what everyone looks like. 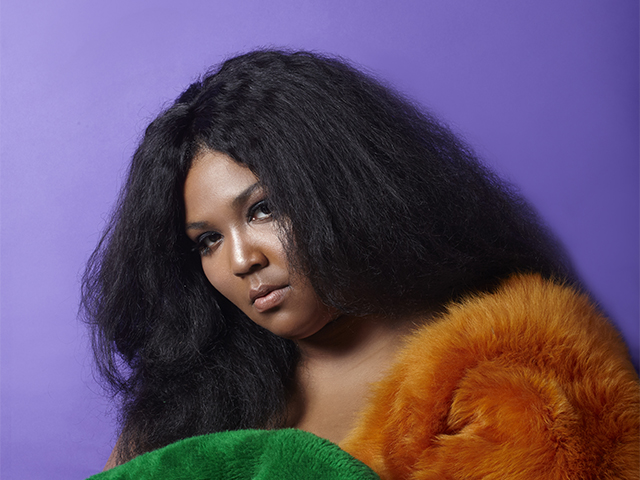 What needs to happen in fashion?
They need to make clothes for people with my body type. Everyone else has to get used to it. I’m going to be black. I’m going to be big. You have to get used to it. I don’t fit the sample size. It’s so pointless. It’s literally pointless. I heard that Gigi Hadid is being body shamed, and I looked at her, and I was like what? Where? What? Who? [laughing]

Yeah that’s how embarrassing it is.
Yeah! Exactly. And Demi Lovato has an amazing perfect body, and she’s called curvy. And Beyoncé is called curvy. Everybody is bored. They need to worry about themselves.

How did fashion magazines play a role in how you felt about size?
I remember the [so-called] “hot” super thin bodies next to someone a little thicker, maybe a pop star who just had a child with just a little bit of hips and butt, and now she’s in the “not” section. That was so discouraging for anyone. It’s propaganda. Now I feel like Queen Latifah will be in the hot section, so that’s some progress. There are women out there killing it instead of the fashion police calling women Beluga whales. It’s so stupid.

Who’s a strong example?
Adele. I love her for saying, ‘you know what? I don’t want to lose weight. I’m going to sing, and I’m going to break records and be amazing.’ And Nicki Minaj…she’s not worried about what anyone calls her. Nicki Minaj is someone with a voice, and she has her butt, and her boobs, and that’s just different. People aren’t used to that, and I think that’s important, and I’m excited.

You showed skin in your video, appropriately, and there was that beautiful gold sparkle. What can you tell me about the story behind that decision to do the glittery effect?
Oh my god, that makes me excited. So I wanted to showcase different body types like a Dove commercial, but not a Dove commercial. They came back with this idea of this balloon carrying things we hate about ourselves, and we started popping those balloons and the glitter inside them represented the beauty in our insecurities. It represents starting to enjoy your insecurities because they’re what really makes you shine. I’m nervous, but I’m excited about the message.

When you’re wearing clothes, your style is very hip-hop. Is that your personal style or is part of that how you have to dress to create a certain look?
[Laughing]I’m excited about everything. My stylist lets me dress myself. My look is pulled together based off of what I like to wear. It’s flattering, what fits for Christ’s sake, you got to wear clothes that fit you so you look comfortable.

How do you create your sound?
I think it was a long road of the music that I studied and I always liked big brassy sounds when I was a flautist, when I studied classical music. I studied composers, and moving forward, I got into hip hop and R&B and discovered Radiohead, and super weird things and then I meshed all of those sounds together.