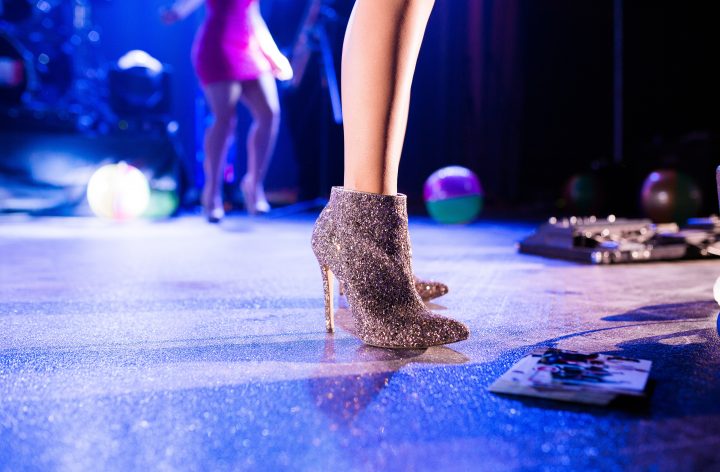 When we heard that Lady Gaga was going to be performing at the halftime show, we were expecting big things. Little did we know that we would be witnessing the greatest halftime show in history.

The superstar began her amazing performance in the sky, singing “God Bless America” and “This Land Is Your Land” with flashing red and blue drone lights beyond her in the air. She then proceeded to jump into the stadium. Yes, JUMP!

The beautiful Lady Gaga flew into NRG’s retractable roof stadium, into a crowd of loyal Little Monsters, opening her performance with a mix of her hit songs “Just Dance,” “The Edge of Glory” and “Poker Face”.

The star continued her set with “Born This Way”, “Telephone”, her hit with colleague superstar Beyonce, “Million Reasons”, and “Bad Romance”.

Lady Gaga not only killed the game with her performance but with her outfits as well! The star started off with a rhinestone bodysuit and a matching pair of rhinestone boots, then traded that for her version of football gear, with a rhinestone crop top with shoulder pads, and bedazzled bikini shorts.

Her backup dancers were appropriately coordinated with her the entire time. Their outfits were great and perfectly matched Lady Gaga’s look.

Lady Gaga ended her epic performance by dropping the mic, and then jumping into the crowd and catching a football mid-air. The star perfectly incorporated her very loyal fan base with the venue she was performing at through her act and didn’t disappoint anyone.

Lady Gaga said in a behind the scenes interview for the show that she had been planning this since she was 4. “For me, it’s all about giving to the fans and bringing people together that wouldn’t normally come together. The thing is, it’s such a big world state in terms of how many people see it and it’s been done so many times,” she said in the interview.

Lady Gaga’s fan base is quite different than typical football fans. She brought in a different fan base to the Super Bowl this year, which helped unite people everywhere.

Lady Gaga gained a lot of respect from a lot of people after her performance, and we can’t wait for her to make a huge comeback with some more top hits!

The verdict: Super Bowl halftime show 2017 is certainly one to remember.

Tags: Celebrity, Fashion
About the Author