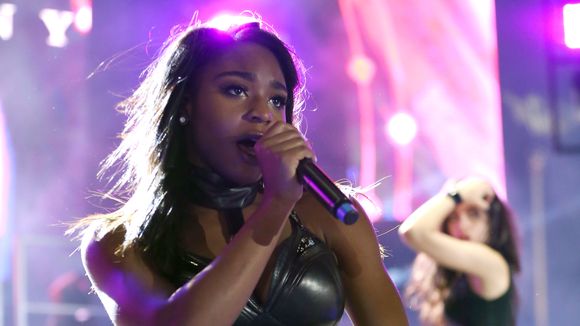 Why It’s Good To See Normani Kordei From Fifth Harmony Get Back On Twitter
by Lindsay Peoples | September 15, 2016 at 3:58 PM

Body shaming, and trolling on the Internet has really taken a turn for the worse with celebrities like Mormani Kordei an Leslie Jones, but this week we’re glad to see that Normani Kordei has made a triumphant return to social media. Last month she shared that she was taking a break because people were attacking her for being ‘too dark’ and the only woman of color in the girl group, and for her curvy figure.

“I’ve not just been cyber bullied. I’ve been racially cyber bullied with tweets and pictures so horrific and racially charged that I can’t subject myself any longer to the hate. I’m not the first black female celebrity to deal with this and I’m sure I won’t be the last.” But with the announcement of her becoming a Diversity Ambassador for the Cybersmile Foundation, a nonprofit geared toward ending cyber harassment, Kordei decided it was time to face the world again with bravery.

In a press release for Cybersmile she said, “By working with Cybersmile I want to raise awareness of the support that is available to people affected while playing my part in contributing to a kinder and more positive Internet for everybody. No one has the right to make where you go or what you do uncomfortable. It’s important to stand up to all forms of bullying, and it’s even more important for those who are around you to be just as courageous and stand with you! Together we can put an end to the hate and promote only positivity and love.”