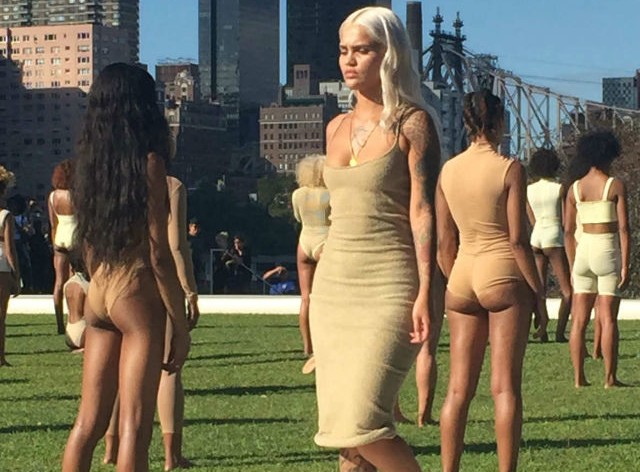 Can We All Accept the Fact That Kanye West Doesn’t Respect Women?
by Lindsay Peoples | September 7, 2016 at 7:30 PM

So if you’ve been living under a rock, a short recap of the first day of New York Fashion Week: The Yeezy show happened and it was a disaster. Not only are people sick and tired (and I do literally mean sick and tired since the venue for the show was a former smallpox hospital on Roosevelt Island) but they are over seeing thousand dollar leotards and basically spandex that is supposed to glorify women but in reality is not.

I have even found myself liking Vanessa Beecroft’s art installations over time, but today’s Yeezy show took the cake in ridiculous. Not only were models waiting for over three hours standing in the direct hot sun for the show to start, but they were clothed, in heels and not given any water. That’s right no water, no assistance from the Yeezy team, and no breaks, in total standing a little over 5 hours. Models fainted, tried to stand and only audience members helped them up. And when editors got there, models had already been standing in the sun for hours, making the conditions basically horrible for everyone involved. The circus that Kanye surrounds himself with obviously nods to his obsession with fame, but I just can’t see supporting someone that continuously proves time and time again that only certain women are deemed worthy in his eyes.

And while some fashion people may like being trapped in a fashion hell, it is more clear to me than ever that after Kanye’s casting call that asked for “multiracial women only” aka no black women, that people will continue to let him fetishize women of color but never respect them or their humanity. Really the only positive I left with was seeing Teyana Taylor in all her glory.

Tags: Kanye West
About the Author