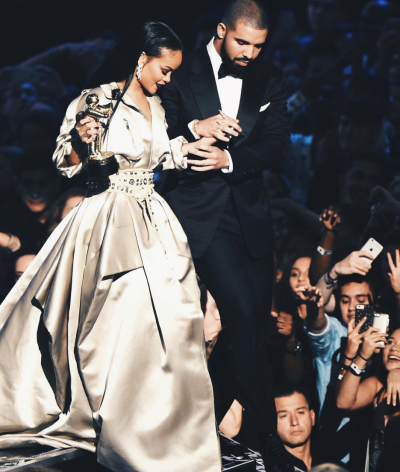 ICYMI, Drake gave the perfect speech to give Rihanna the Michael Jackson Video Vanguard Award last night. In typical internet fashion, everyone is trying to find fault with him being real about how he feels, but they’re missing something major.

The VMAs are always an interesting event, but this year was definitely made by Drake’s speech. Pretty much everyone looked like the heart eyes emoji.

Unfortunately for Drizzy, people love to focus on the negative. There was a moment where it looked like Rihanna dodged a kiss from him, but the video definitely shows her going in for some PDA first.

#PressPlay #Rihanna was like boy don’t mess up my makeup ???? via: @Kaylorray

The Shade Room changed that caption which originally said she was denying him. What’s even more annoying are all of these people saying Drake is a punk for admitting that, “She’s someone I’ve been in love with since I was 22 years old.”

This is totally a reminder that many of the gender roles in our world are kinda ridiculous. If Drake, who’s pretty sure he’s a man, wants to admit that he loves someone, why can’t we just let him do that in peace? Admitting that he has the capability to, I dunno, care about another person doesn’t make him weak. So, why is it that he’s catching flack for it?

Our current culture of not telling each other how we feel isn’t healthy. You obviously do not have to embody Juliet screaming off of a balcony, but talking about your emotions is actually pretty good for your well-being. Taking care of ourselves from the inside out. Women get more of a pass than men do, but their expression matters too.

Let’s try something new – celebrate people when they feel comfortable enough to say how they feel. Groundbreaking.