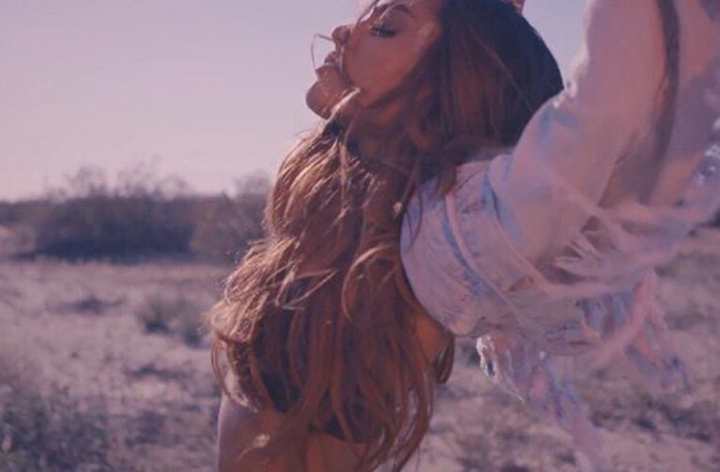 Ariana Grande has had a lot of bad press in the past few years, but it is exciting to see her embracing herself as a woman, and as an artist. The only question is she doing it for herself or for fame?

Remember the days when Ariana was on Nickelodeon, and then somehow she was caught on tape licking donuts and hating America? It’s still up for debate whether that was her Britney head shave moment or a terrible prank, but she has come a long way since then. Ricky in the donut video turned into Big Sean, and she seemed to embrace her body and sexuality in one fell swoop, much to the chagrin of teenagers’ mothers across the States.

tell me about it, stud …

Mothers began to mourn the loss of another Disney/Nick star gone “bad,” a la Miley Cyrus. Their perfect pictures of cute, sassy, songstresses on entirely appropriate shows turned into a leather wearing, floor writhing, sexual singing woman. Frankly, it may not be the decision you wanted, but it’s hers.

As long as these actresses choose to embrace their sexual side in public after they are finished being the Cloroxed version of themselves on a TV show, there is not a real issue. Sure, it can be frustrating to have to explain to your 14-year-old why they are not allowed to see their favorite starlet perform in a cage, but these women are more than legal when they make these decisions. In fact, it seems that they enjoy switching their character cages for real ones.

The question from many of their fellow young women is, “Who can blame them?” It must be mind-blowingly difficult to stay a sanitized version of yourself all the time. Those of us in the real world can have a little fun from time to time without having to worry that it will wind up on TMZ the next morning. Really, all you need is a solid set of friends who love and care about you. Celebrities, on the other hand, need an army and back door entrances, and they could still very well be caught.

Ariana was caught once or twice doing questionable things, but there is no question now about her embrace of her sexuality. Everyone started to question who she was trying to be as she crooned, “She might have let your hold her hand in school, but Imma show you how to graduate,” alongside sex symbols Jessie J and Nicki Minaj. That question sounds a little silly now after hearing the hook on “Everyday” or listening to Lil Wayne suggest that Ariana is his “little mama. Goodbye to the good girl.”

Just in case you weren’t sure, on the title track, she croons “Don’t need permission, made my decision to test my limits,” to open the song. She’s made it quite clear that she is not your starlet, but her own person. Still, this isn’t enough for some.

It only takes one look at the comments on her IG, Twitter, or memes to see that people are questioning who Grande thinks she is. The accusations of her doing this for fame are rampant, and so are the comments about her “kid” body. Her lack of curves doesn’t make her less of a woman any more than Nicki having them makes her one. What we do know, is that sex sells.

We may never know if someone on Grande’s team told her to sex up her image from looking surprised after kissing Mac Miller in a room full of balloons to singing about how her man pleases her every day, but there is no doubt that she looks happy with her current persona. Whether the confidence is manufactured or organic, it appears that it has spilled into the rest of her life. We cannot wait to see her drop Side to Side with Nicki on Sunday. We have a feeling it might be her most freed video yet. Nicki does have a way of being one of the most sex positive stars ever.

Bunny ears and all, Ariana, you’re glowing. And we’re here for it.