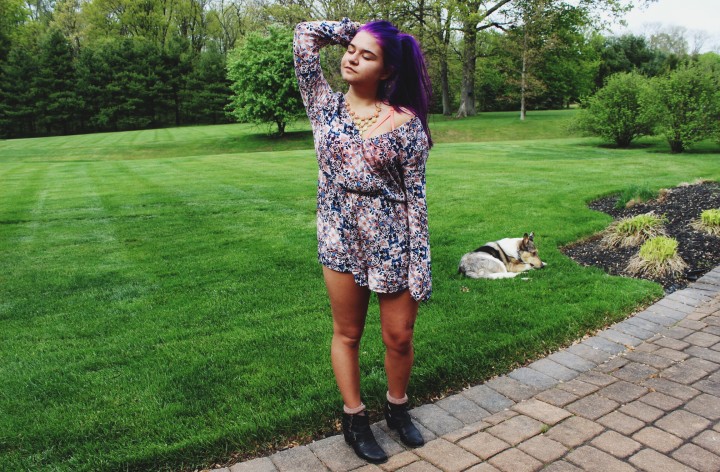 If you haven’t seen Jule McNamara around on our pages, consider this your introduction. This college freshman embodies all of the feminist, body positive power that we wish we had at 18. She is quite literally goals when it comes to freedom, self love, and acceptance.

Young women are often the most affected by the media, and we need to make sure their voices are heard. We couldn’t help but take the opportunity to sit down and chat with her about her personal experience.

If you had to use one word to describe the body issues that result from the media’s depiction of women, what would it be?

Unnecessary. There is no reason that any of us should have to look into the mirror and wish we were staring at another version of ourselves. There has been too much focus on women’s bodies and appearance as a whole and I find it completely unfair. It deters us from what really matters in life, and it prevents us from going after what we truly want because we are worried that we are never going to be good enough! And that couldn’t be further from the truth.

When I was in treatment for my eating disorder, I took a look at all of the amazing women, 15-50 years old, and I realized that they were all so strong (and still are) because they decided to face their biggest fear head on. We had several groups talking about media and the pressure we face growing up with an “ideal” image of what a woman should look like. A lot of it is for money and marketing because companies know that they can make a lot of money off of people’s insecurities. It’s manipulative and inhumane; we should be building each other up, not tearing each other down. When it comes to health and wellbeing we shouldn’t be selfish or money hungry.

What do you think is the driving force behind the body-positive movement? Do you think that’s flexible?

In all honesty I think that people are sick and tire of being trained to hate themselves for their color, size, gender, etc… The driving force behind the movement for me at least was how tired I was of living with so much hate for myself. It was exhausting. I couldn’t go on any longer and I knew that there really only two options: end my life, or start recovery. And I am very proud and thankful that I chose the latter. I can clearly remember the night that I asked my parents for help. It took me nearly an hour to choke the words out because my eating disorder had a hold of my tongue and at that point in time it was the only coping skill I had ever known. I couldn’t imagine a world without it.

But the world is so much brighter and beautiful when you treat your body as your home, it’s like there’s no limit to what you are capable of achieving. There is a world outside of trying to be perfect, and there are more important things to live for. I know that I can do anything that I put my mind and hard work into because there isn’t this heavy burden over my shoulders telling me that I will never be good enough.

I also think that there are many different driving forces for this movement, and it will definitely vary depending on who you ask, and all of these reasons are valid. Take whatever reason that resounds in your head and stick with it and keep fighting, body positivity looks different for each person.

What’s your take on women using fitfluencers as body goals?

I hate scrolling through Instagram and seeing comments on a picture saying, “I wish I looked like this” and “OMG goals,”; it makes me really sad. Because I used to constantly compare myself to others, I could never catch a break and it was unhealthy. I would be changing at school in the locker rooms for gym and all that I would be able to focus on was the fact that I wasn’t skinny or as pretty as everyone else. And it took me an extremely long time to realize that I needed to stop wishing and trying to get myself to look like someone else. It’s a whole lot of wasted energy being put into something that can never happen. No matter what workout you do, what you eat, or what makeup you wear, you are still going to be you. I’m not trying to say that working out and putting makeup on is a bad thing to do. I’m just saying that if your intentions are in the wrong place, you will never truly be happy with yourself. It will only lead you down what seems like an endless road of self-consciousness and hate. Seeing women compare themselves to other women really breaks my heart because I used to be the same exact way.

I worked so hard to accept myself and snap out of the trance society had trapped me in. Self-love is more than just accepting your appearance. It’s also accepting who you are inside, and I know that that is the cheesiest thing in the world but I have never felt more strongly about something. I love myself to the bottom of my heart and I wouldn’t trade any part of me for a part that someone else possesses. In order to get to that place I had to take a long break from social media, school, and I had to spend almost all of my time trying to figure out what was really going on in my life that was driving me towards self-hatred. Eating disorders and disordered eating habits are not just about the food, it’s about a whole lot more.

How do you deal with people who don’t respect your body?

Just like I would do for anyone, I stand up for myself. I don’t worry about being called a bitch or being talked bad about. I do what I need to do to make sure that my body is respected by my own definition of respect. It varies from person to person and that’s ok. That’s why it’s so important to make sure that you are aware of your loved ones boundaries. I used to feel guilty for saying no or for speaking up against what someone told or asked me to do I used to seek other people’s approval before my own and oh my have things changed. I don’t appreciate people who think that they are entitled to my body just because I am speaking to them. I say how I feel and I use my voice. Again, this took time but it is such an important concept to teach to yourself and the ones that you love. You don’t deserve any less than you expect. Don’t settle for anyone because at the end of the day you are yours.

Right on, Jule. Right on.