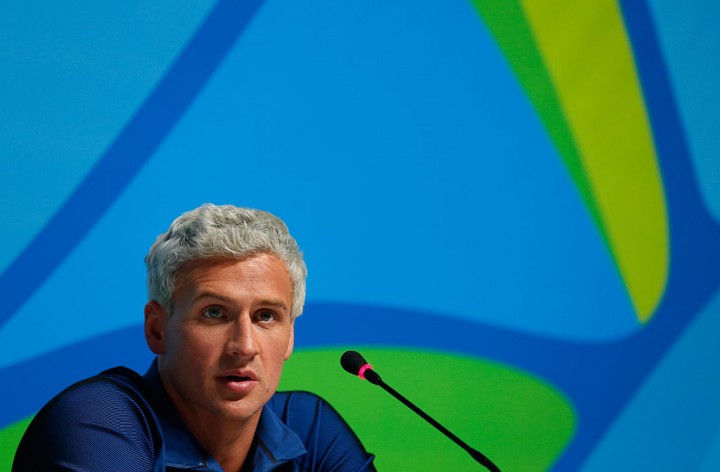 ICYMI, Speedo decided to dump Ryan Lochte after his piss poor (pun intended) behavior in Rio de Janeiro. While Speedo may not be the first brand you think of a for a bathing suit, their decision is setting the standard for a slew of other brands.

When Lochte decided to lie about his and his teammates actions, he made a conscious decision. He decided that instead of taking the blame for acting like a drunken idiot, which young Americans do abroad every single year, he would rather lie about the police of a host nation. Considering the coverage of Brazil and the climate around police brutality in his own country, his actions were pretty abominable.

They’d be bad without the context, but context is key. The same people that were vilifying and totally coming down on Gabby Douglas for not putting her hand over her heart during the national anthem (which she doesn’t have to do, btw), are the same people who were saying things like, “Oh, he’s just a drunk kid.”

Ryan Lochte is a lot of things. He’s an insane swimmer, talented, and a liar, but Lochte is not just a drunk kid. He was a 32 year old who made a decision that he thought would benefit him more than telling the truth. And because of that, brands don’t want to associate with him.

To Speedo, we say cheers. He is human, and he’s totally allowed to make mistakes. But that’s part of his personal brand. When you connect two brands together, it’s because both of them stand for the same things. They are supposed to build each other up, not bring each other down.

So, when people like Lochte make a decision, endorsers have to decide whether or not that decision is something that their brand can stand behind. Think about all of the brands you use and who they’re associated with for a second. Are there any that you love but you can’t stand the celebrity behind them?

Now, how many brands can you think of that have actually dropped people who did something harmful? It’s rare, but it might need to happen more often.

People are brands just like companies, and both of those things change. If an athlete goes from being a model citizen to offending an entire nation, maybe that person doesn’t need to be your representation anymore. If a model goes from being body positive to culturally appropriating groups of people for her own gain, maybe she’s not as positive as you thought. In both situations, those brands probably aren’t a good match anymore.

And that’s okay! Things change, and we should be more flexible with that. Shout out to Speedo for setting the tone.

Our hope is that more brands who say they are inclusive, celebrate women, or support women as they are will do the same. Language and representation matter.