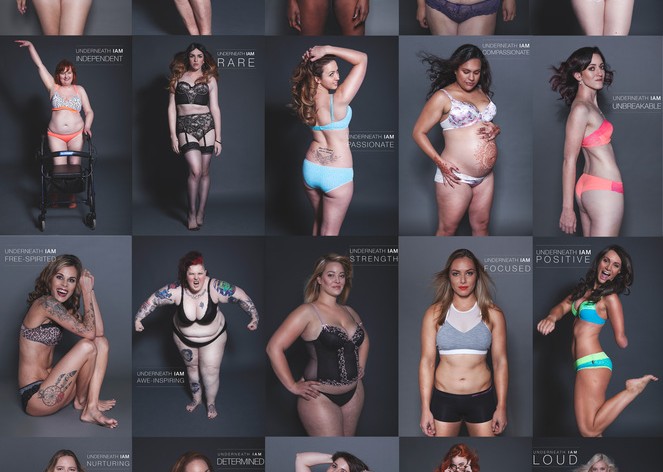 A new photography project started by Amy D. Hermman, documets 100 bodies and 100 stories of women who have journeyed through life, struggling with body insecurities and want to share their journey. In the beginning, it started as just her friends posing for her, but once she started asking women on Facebook, she quickly realized that so many women wanted to be photographed.

"Who's to blame for the creation of poor body image among young women today?" This is a question I was asked in a recent interview… Firstly, it's not really about placing blame onto any one particular person, group or organisation. But certainly, there are clear leading factors that have had a large impact on the lack of positive thoughts women engage in on a daily basis toward their bodies… One thing that can NOT be "blamed" are the models themselves that we see in magazines and mainstream media. Yes, they are thin, yes they are young and yes, they are more than often white. But these women are just like you and I. They are human. They are women. They ARE real and they have just as many insecurities as you and I. I recently photographed a young woman who works as a model full-time. She told me "it makes me so sad that breathtakingly beautiful girls can be so insecure. They've been told 'no' to many times and it's impossible not to take it personally when you yourself have started to believe that your body isn't 'right'". Are these women really the ones you need to be directing your negativity and hate toward..? I don't think so! I do think that the industry needs to be held partly accountable, sure. But the girls that are simply doing their job to make a living? No. "No one is safe" or immune from the mental torment that comes with illnesses such as body dysmorphia and anorexia. But are the actual girls working in the industry, personally to 'blame' for this? No, they're not. Please remember that these women are facing and travelling their own journey too! We are all on our own individual journey but that it is totally possible to support each other collectively! #womenunite #womensupportingwomen #bodypositive #melbourne #underneathwearewomen #underneathiam #united #love #bodylove #bodyimage #effyourbeautystandards #weareallinthistogether

She set up a website and registration form, and found that hundreds of women wanted to join in on the project. The goal Amy says is to, “To educate thousands.” The crowdfunding page notes that the cause is for, “The fat girl who needs the gym. The skinny girl who needs to eat more. The disabled woman who needs sympathy. The beautiful girl that is always happy…these are simply programmed responses created by us and for us to suit a greater societal idea for what is deemed acceptable and ‘normal’.