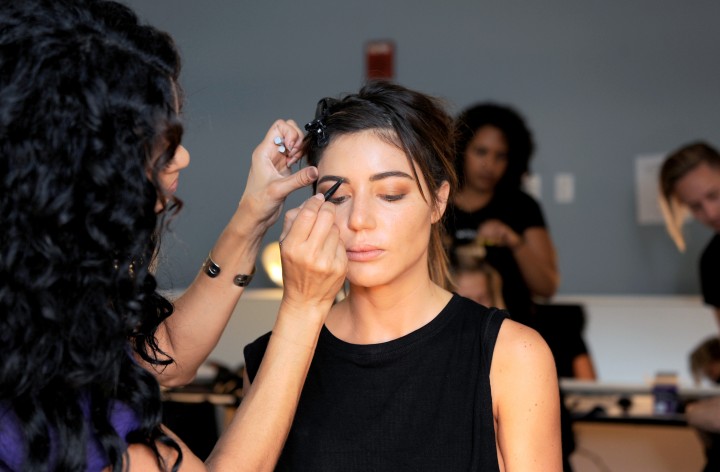 When a hair stylist asked if I ever considered temporarily tinting my eyebrows, I furrowed my bleach blondies in confusion.

I was a pre-teen and I hadn’t discovered eyebrow makeup. I wore dark eye makeup and never even touched my eyebrows.

I thought once that they looked a little odd since they were so light compared to my dark eye shadows, eye liner and mascara. I just never did anything about it. I saw magazine photos of runway models who had bleach blonde eyebrows and dark eye makeup, so I was OK, right?

It wasn’t until this hair stylist mentioned that I could tint my eyebrows that I considered it. I thought, why not?

So I tinted my eyebrows a couple  times. The dye was temporary, so it faded on its own.

The one thing I really liked about tinting my eyebrows was that my makeup just looked more put together with darker eyebrows.

The one thing I really didn’t like about this eyebrow tint was that it was way too dark compared to my hair color. It looked really unnatural on me; everyone knew I had bleach blonde eyebrows.

Tinting my eyebrows made me realize I needed to remove the suddenly visible stray eyebrow hairs. So I took to tweezers for the first time.

I decided not to tint my eyebrows anymore because I just kept tweezing and tweezing. And, of course, because the tint was way too dark.

I decided to research eyebrow makeup, since I figured that was probably a thing. I was in luck! There were so many different products I could use for my eyebrows. I settled for a blonde eyebrow gel.

This was so easy to use, and it matched my hair perfectly. It was then that I vowed never to temporarily tint my eyebrows again.

With eyebrow makeup, I could carve my brows into any shape I wanted and make them any color I wanted.

I recently read that permanent brow and lash tinting could soon become illegal. I thought temporarily tinting eyebrows was OK because it would go away, but I never thought of how dangerous the chemicals could be (even though it wasn’t permanent) since they were so close to my eyeballs.

I didn’t even know eyelash tinting was a thing. How do you do that without the dye stinging and your eyes watering?

If the formula is safe enough for it to be so close to your eyes, I’m sure it’s OK. However, until the dyes are FDA approved, I don’t think eyelash tinting is a safe treatment to get at a salon.

Moral of the story: be careful what you do to your face, but it’s lovely just the way it is.