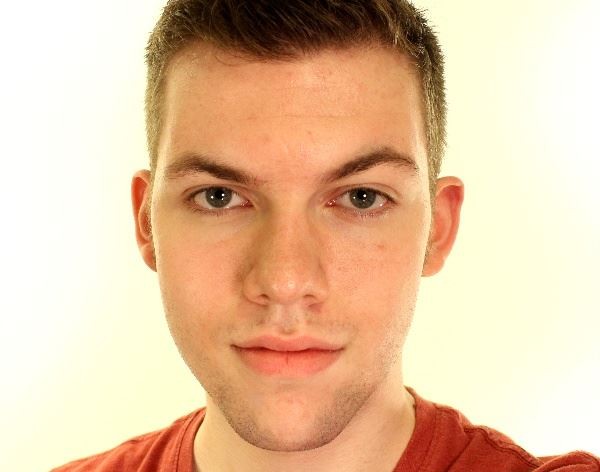 We received a message from one of our followers, Krisi Kaz, who was pretty upset about a video where a small-minded feminist-hater named Nate decided to explain to the world why “fat acceptance,” is bad for society. To be fair, he thought he did a pretty great job. We hate to give him video views, but you can check it out below. If you’d rather save 5 minutes of your life that you may never get back from a raging troll, we can give you the highlights.

He cited statistics, talked about the ramifications of being overweight on the financial system, and even used a finger to point out fat on women in the video. He did a totally fabulous job of ranting like a petulant chauvinist child, but not such a great job of constructing an argument.

1 – The name of the series is “Feminist Logic Fails.” Le sigh. He even refers to feminism as “toxic garbage.” First rule of communication: establish your credibility as a speaker. No one who thinks feminism is a good thing is going to even listen to what you have to say. If you are trying to convince an audience, you’ve already done a terrible job.

To assume that all feminists think the same way about a topic is asinine. Also, why attack feminism? Are you perhaps threatened that women may utilize their brains to work in a way that may put them on an equal playing field with men? We just had a woman secure a major party nomination. The gender system is beginning to balance out. Hold onto your small jock strap, Nate.

2 – “Wow, that was a mouthful of excuses,” was the next flamingly idiotic thing that came out of Nate’s mouth as he responded to a woman saying that you can commit to a grueling exercise routine to mold your natural shape into an unattainable ideal. Nate calls it exercise, we call it bull. See, we have absolutely nothing against exercise. It does make us feel better, we are more focused, and we tend to be happier when we make that commitment. The problem isn’t with exercise, Nate. The problem is with your complete and utter disregard of the fact that there is an unattainable ideal put forth for women in the media.

We know a lot of people look up to someone like Iskra, but Iskra’s natural body does not look like Kate Hudson’s. And that’s cool. Neither of their bodies look like Taraji Henson’s and all of that is okay. It is physically impossible for some women to get a body like Ciara without starving themselves. Nate, you talked about how obesity leads to death? So do eating disorders. When the media puts out an image of what’s beautiful and women kill themselves trying to reach it, that’s not any better. If you don’t get that, you’re dafter than we thought.

Also, unless you’re someone’s personal doctor, you have no idea what they do or don’t have to do to lose weight. So again, why are you talking?

3 – “Contrary to popular belief, acceptance is not always a good thing.” Great, that means we don’t have to accept your vacuous bull. Next.

4 – “By accepting your body the way it is right now, you are slowly killing yourself.” Whoa, tell me more, Nate? I am so in awe of your manly knowledge. Like, pretty please. I’m so mind-blown by your ability to simply look at someone’s physique and tell whether or not they’re going to die. It’s like you’re God or something.

I had no idea that everyone who has weight on them is committing suicide even though there are a ton of naturally thin people who eat like crap, never exercise, and keel over from heart attacks. Can you use your omniscient x-ray vision to predict them dying too? Or are you just going to use your stereotypes to point fingers at people? Either way, you’re totally all-knowing about health and women’s bodies, so we have to listen. Continue, O brilliant one.

6 – “When you’re telling people to accept being fat, you’re telling them to accept all of these things too.” Omg, I live for pettiness and logic fails. No one ever said that you had to think being fat was pretty. No one even said you had to accept being fat for yourself. Body acceptance is literally about learning to love yourself for who you are, and learning to shut the &^*# up about the way that other people look. No one asked you to bear extra weight, Nate. The only thing anyone did was tell you to keep your mouth shut. Clearly, that’s very difficult for you.

7 – “Losing weight takes time and effort, might as well give up then?!” NO ONE SAID THAT. If you’re going to make some pissy, ranty video about women and their bodies, at least do some research. No, not all of the statistics you cited, but qualitative research. When the woman in the video said that you can’t get flat abs in two weeks, she wasn’t suggesting never working out. She was calling b.s. on the fitness industry for putting out workouts that are supposed to get you fit and flat in a matter of days. Sans liposuction, no one can lose that kind of weight immediately (including most of the people at the end of your video). We’ve already talked about, and some of our influencers have directly shown, how easy it is to fake a before and after photo. That proof was useless. But, I’m jumping ahead. Pardon me for a minute.

8 – “It is my problem –  your behavior is damaging our country.” Okay, even our dads don’t wag fingers at us like that anymore because, surprise, we’re adults. Yes, obesity is expensive for the nation. It can also be expensive on a person’s psyche. But did you know that there’s a distinct link between obesity and poverty?

I’m a sociology major who worked with impoverished children in a city which is one of the most socioeconomically segregated in the nation. Don’t bother fighting on this. One of the greatest determinants in the obesity epidemic is lack of access to healthy food. There are a plethora of people who are considered to be obese who don’t want to be, and never meant to be. Healthy food is expensive, and there are plenty of Americans who cannot afford it. You want to see the obesity rates drop? I hope you’re out there volunteering and helping to teach young children what it means to eat healthily and getting them equal access to the farmers’ market. If you aren’t? Shove it.

11-  “Of course, none of those are health books, and none of them are written by a doctor.” Actually, some of those women are doctors, just not of medicine. If you’re going to nitpick, everyone else can too. And the video never said they were physical health books. The books were about self-acceptance. We’re just tired of you at this point.

Also, Nate, unless we missed something, are you a health expert? I mean, even if you are, there are so many people we could all go to rather than a whiny man who’s afraid of women with an opinion. Talk about a waste of a co-pay.

12 – Aspirational tropes of beauty are b.s. That’s actually 100% right. No one has to fit your standards, Nate, unless they want you. Which we have our own feelings about, but we’ll reserve those.

Ladies, there are “men” like this out there. We know you know, but this is your daily reminder to not deal with the bull. Call it out when you see it. Support people who support women. And try not to be too fabulous. Nate might get offended.