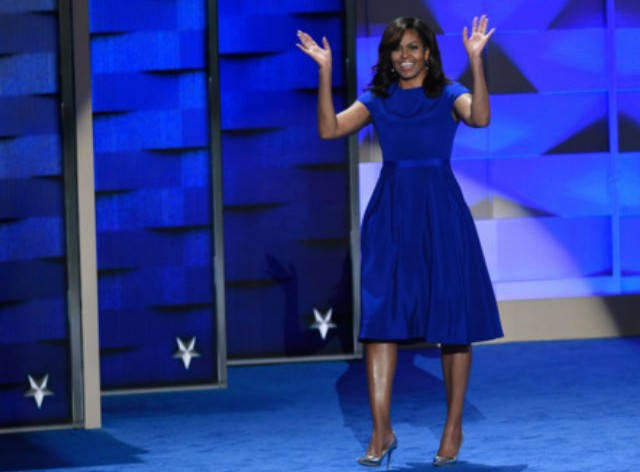 Why the Politics of Michelle Obama and What She Wears Matters
by Lindsay Peoples | July 27, 2016 at 7:30 AM

All I really wanted to see from the DNC was Michelle Obama. While it was great to hear from other delegates and politicians on the many, many, many reasons why we shouldn’t vote for Trump and why Trump isn’t for women, I patiently waited for the First Lady to grace the stage because I’m admittedly obsessed with; eight years later, and I am still in awe of the role model that she is for young women of color.

So when people started to question, why does it matter what she has on and are fashion people that shallow to not care what her speech is about but more about the designer she is wearing, I had to comment. I enjoyed her speech tremendously, and her phrase, “When they go low, we go high,” is without a doubt my new motto. However, her choice of wearing a cobalt blue dress by New York fashion designer, Christian Siriano was a huge win for the fashion world.

Wondering why? Let me explain. Christian Siriano has been the pioneer of not only dressing women of color, but women aren’t fitting into classic sample sizes fit for models on the runway. He is fearless, and has no issue with dressing any woman because of her skin color, popularity, or size. He is also a gay rights activist, and continues to crusade for under-served communities that constantly feel like their voices are invisible.

When Leslie Jones tweeted that she couldn’t find a dress who made her a custom gown that slayed? Christian Siriano. And he was quick to tweet, “It shouldn’t be exceptional to work with brilliant people just because they’re not sample size. Congrats aren’t in order, a change is.” And a change will surely come, even if in small steps, because of Michelle Obama’s decision to wear Soriano in front of millions of people.

A designer who celebrates women of all shapes, colors, and sizes was put to the forefront. It matters.