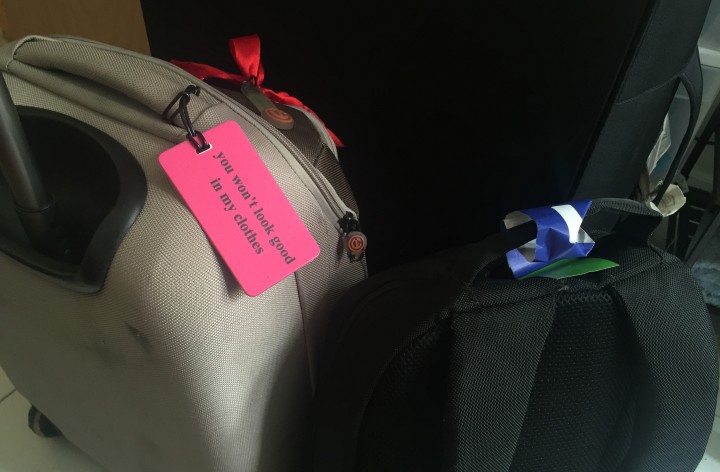 I was planning to move across the country with only two suitcases. But how could I fit my entire life into two suitcases?

I couldn’t. I packed and unpacked and repeated the process a few times. In the end, I mailed the things that didn’t fit and paid for an overweight bag on my flight out.

I was planning another move. But I’d only be moving a few hours away, not across the country.

Instead of two suitcases, this time I had three to fill.

Even with three suitcases, (I’d size them at extra small, small and large) I couldn’t fit all that I had accumulated in the span of a year into the bags! How did I end up with so many things?

I started unpacking and re-packing a few times.

I pulled out clothes that I didn’t like or didn’t wear often. I ended up pulling out so many clothes that I filled up six bags. I had six bags of clothes that couldn’t fit into my three suitcases! I walked them down to a thrift store to donate them.

With more room in my suitcases, I started packing again. I still couldn’t fit everything in them. So instead of clothes, I started pulling out items I could either re-purchase or items that I didn’t really need.

When I finally packed up all my belongings, I had extra room left in one of my bags.

I looked at a coffee tumbler I had for a couple years. It says, “GO AWAY. I have a deadline.” on it. Did I really need it? At this point, I was only trying to bring the necessities with me. I figured, if I really need a coffee tumbler, I’ll buy another one, right? So I placed it into my overflowing recycling bin.

Then, I had a bit of an epiphany. I sat there on my bed for the longest time, in silence, just thinking. I looked at the remaining space in the last bag and realized I could’ve kept a lot more things instead of donating or tossing them.

But at this point, it was already too late to pack more things because I had donated and tossed all the things I didn’t want already.

I looked back at the coffee tumbler sitting on top of a mountain of cardboard boxes and other trash. I grabbed it and stuck it in my last suitcase.

I realized that packing just what I considered my essentials left me with a lot of open space. This was space I once would’ve packed to the brim, like a year ago when I first moved. Looking at the space with a newly added coffee tumbler, I realized I didn’t need to pack the suitcase to the brim. I zipped it closed and that was that. I was done packing.

I went from getting rid of non-essential clothes to getting rid of personal things in which I had a connection. If I took away all those personal items, what would I be left with?

I realized that if I could part with personal items, that I could really start to pack more intelligently and efficiently from now on.

I don’t know if I’ll move again, but if I get to that point, I hope I can pack up my three suitcases in just one try.

Tags: packing, Travel
About the Author