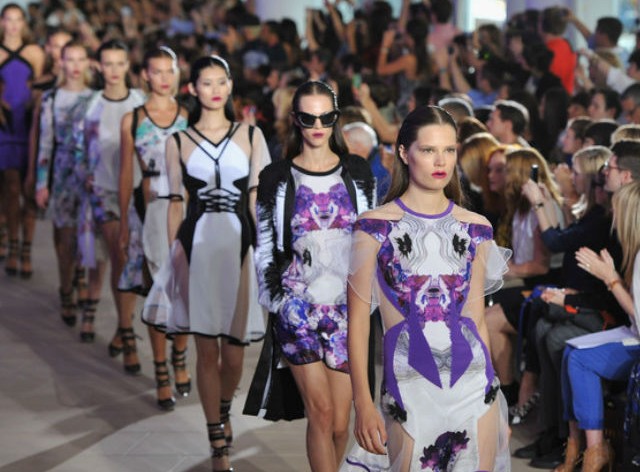 Prabal Gurung Partners with Lane Bryant to Bring High Fashion to Mass Retailers
by Lindsay Peoples | July 8, 2016 at 8:15 AM

Today WWD reported that designer Prabal Gurung will be teaming up with Lane Bryant to create extended sizing in clothing inspired by his runway collection. “I’m size blind” says Prabal–who notes in the article that he often cuts ready-to-wear pieces for customers up to a size 22, but retailers usually only buy up to a certain size. “When the buyers come, they are buying to what they think they need.”

The limited-edition collection with be an exclusive label at Lane Bryant, available in 180 Lane Bryant stores and lanebryant.com come March 2017. So far sources say that it’s a one-year deal, with two seasons being released, which isn’t much but that’s a start. The collection will have 18 items in the first season–t-shirts start at $48, $398 for premium leather jackets, dresses at $128 and skirts at $108.

Prabal noted that he has been a champion for curvy women since day one saying, “I made a gown for the cover of O for Oprah Winfrey, who shared the cover with Ellen DeGeneres. It didn’t even look like it was a different size. It was an incredible opportunity. I don’t care about the size of women. I’m more interested in the essence of who she is. I want to be able in my own way to reach out to all these women who feel sidelined, and say to them, ‘You do matter to me.’ And though we have yet to get a sneak peek of the clothing, it’s always a good day when high fashion is inclusive of curvy women.