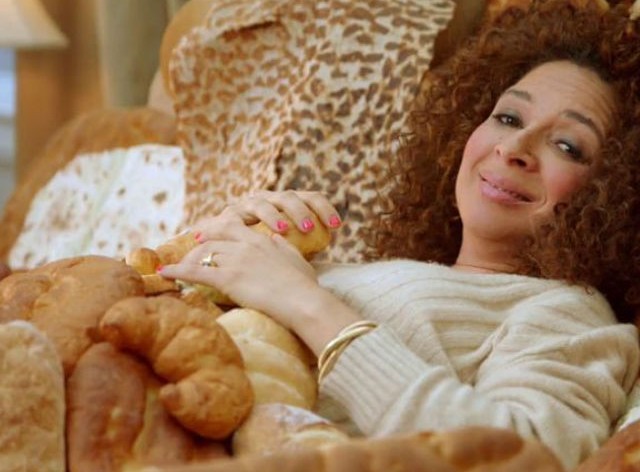 Maya Rudolph Surrounded by Loaves Of Bread Is the Best Thing You’ll See All Day
by Lindsay Peoples | June 8, 2016 at 4:24 PM

Oprah’s stance on body positivity and her relationship with food is definitely an interesting one—for years, she has publicly shared her highs and lows with her fans, and documented what it’s like to struggle with body confidence in the spotlight.

And with her recent collaboration with Weight Watchers, she’s appeared in ads since 2015, and invested over $40 million according to Time. In particular, her commercials for Weight Watchers have gained a lot of popularity, and the “I love bread” video, more so than any other, was the most controversial and truth-telling moment. In it, she basically unpacks her love of ‘forbidden’ foods and how diets make you feel like you can’t eat foods that you love.

As a bread enthusiast, I enjoyed this video even though it seemed like an odd parody, but today, we were actually blessed with a parody by none other than Maya Rudolph.  It starts out with with Rudolph saying, “I eat bread every day — and on Weight Watchers plan, it’s OK!” she confesses. “Let’s all have some bread! Look under your seats — what’s under there? Bread!” And the best part is when Rudolph says “Think: sculptures made of bread. A “bread” bed. And more.” Videos like this are a great reminder that your relationship with food and your body is your own, and body confidence can be talked about in a lighter tone without being offensive. Bless up Maya.