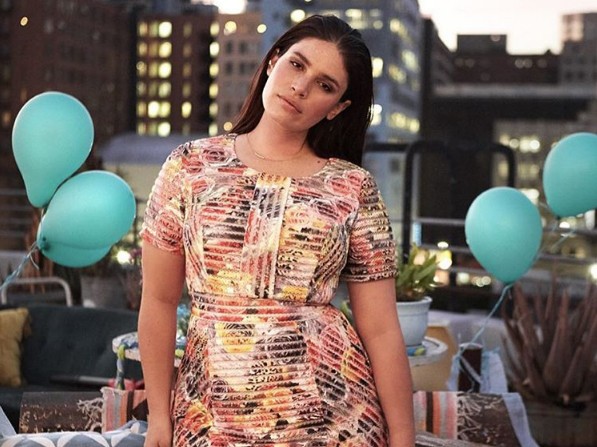 RunwayRiot Candid Interview With Curvy Model Clémentine Desseaux: ‘We Won the Battle But Not the War’
by Ashley Hoffman | June 3, 2016 at 10:19 AM

Who’s that windswept strong looking woman on a rock in a delightful peasant dress on Instagram’s own feed? If dreamy smiley unretouched images of a woman making fashion for bombshells who wear larger sizes look desirable are your bag, then you already know. It’s French model Clémentine Desseaux. The model, producer, and blogger is a a real-talking lightning rod for change who just set Instagram on fire with Instagram’s #RunwayForAll campaign for diversity in fashion. It featured her, Mama Cax and other well-known bae people who do not fear barriers.

Clem to her fans, this warrior has an unbridled conviction about why bold non-cheesy projects are still needed for women who wear larger sizes. She attracted major “FINALLY!!” attention when she created a project using Christian Louboutin products, because the media promptly decided it was actually a Christian Louboutin campaign. (It wasn’t.) But here’s a woman who deserves to command any major stage, and is actively grinding to flip the table over on the perception of women with unconventional-for-high-fashion shapes. “We are still considered weaker and not as valuable as another model or woman would because of our curves,” she says, but she’s encouraged by recent progress.

Clem describes her body as “fluffy pillow material,” so she might just be your new favorite. To better understand what she’s fighting for, I reached out to Clem via e-mail. Here, she tells RunwayRiot about being a part of #RunwayForAll, why seeing unretouched images makes brands more DOPE, and how people still assume curvy ladies have confidence issues.

“#RunwayforAll is not so much about what we look like anymore but more about what we represent,” says Clémentine Desseaux (@bonjourclem), who grew up in France. “I was always way bigger and taller than everyone when I was growing up, and I had those freckles,” she says. “When I saw the first plus models out there, I started thinking about trying it out. At that point I had no idea it would take me to where I am now.” Three years ago, Clementine moved to New York with $2,000 to her name and never looked back. “My size and look were in the way of me feeling invincible when I was young,” she says. “I hope I was the last generation of women to think like that. Role model is the new top model.” Every day this week, we’ll be sharing the story of a model who is redefining industry standards and making sure there’s room on the #RunwayForAll. Photo of @bonjourclem by @emmaandhercamera

How did you become a part of #RunwayForAll and how did you react, you know like emotionally when you found out?
I remember when I received the email from the Instagram team, I was pretty shocked and my first question to them was “why me? How did you find me?” I was amazed that even though my follower count isn’t one of the greatest in the industry they chose me. Their response was that someone on their team saw my StylelikeU video from 2014 and loved my message and personality. I thought it was awesome and refreshing that the amount of followers isn’t the only reason brands want to collaborate with people. Truthfulness, personality and message are also just as important. That made me feel really special to be associated with such awesome meaningful people in the industry. And getting a chance to spread my message to over 160M people worldwide is just mind blowing!

Interesting how that DIY video featuring Louboutin stuff got people talking about how you were a face for them.
It was a very special moment in my career. It was impressive to witness media’s power of influence. Whatever is in the press is considered true for most people. It is scary. In that case, it definitely played in my favor and it was fun and actually very interesting to see how the public reacted to the news. People were excited, expressed their excitement directly on both my social channels and the brand’s. It actually made me happy that people are really ready to see a change in the industry, a change towards inclusivity and diversity. Seeing someone real, non photoshopped, not perfect, different actually made the brand more likeable, and the people who never felt the need to engage a conversation with the brand, did, just to say how well done it was! That’s dope! I hope it will push more high-end, exclusive brands to do the same. I would love to work with a French beauty brand, that would really be a big bold step for my country in term of diversity and body image.

Have you done an interview when the interviewer didn’t ask you about diversity or self-acceptance? What do you wish the media would ask you?
Actually, I might have, but not because the question wasn’t posed, but because I knew how to turn it into something else. Even though it is absolutely something that needs to be talked about, it is a subject that is sometimes getting old and that is definitely overused because it’s on trend now. Because I am plus, people just assume that I have to be talking about body related issues, body confidence and most of the time also assume that all curvy ladies have body confidence issues.

Right, I get that assumption. What’s the most comfortable you’ve ever felt with a photographer?
I love concepts. People that are building a strong concept with a powerful message behind it. I love when I get to show my personality on shoots, those are my favorites. I am glad the industry is making more and more space for girls that have something to say and is not solely focused on image anymore.

What things have you seen from your insider perspective that make you feel the industry is getting more representative of different kinds of women?
The change over the last couple of years has been great. I think brands are finally listening to their clients who are craving something different, real and powerful. Brands finally get the message. That’s big. And that’s only the start of it. I can’t wait to see the industry being creative again. It’s been a while.

And what lingering biases or exclusionary experiences do you feel if any?
As plus women, we are still not treated quite equally in the industry or in life. In some cases, we are still considered weaker and not as valuable as another model or woman would because of our curves that are seen as a weakness and a mater of jokes. However, this is fading really fast in the industry, I barely ever feel that way. However, talking with a lot of young women on line, I can see the struggle is far from being over since this stigmatization is still very present in schools and work place. We won a battle not the war.

Culturally, do you see a difference between the states and Europe in terms of options in fashion?
The options in the U.S. are better than in France, for sure. However with Europe, [in the U.K., they’re making more efforts] to maintain a high number of styles available as well as quite a decent quality of clothes. Quality products and variety is still a big issue for me, globally. The offerings for plus is very limited and the offerings in stores (physical stores) is quasi non-existent…I look forward to the day that I can walk into any store downtown New York City and find my size.

What’s your dream job?
I already have my dream jobs. I wear several hats as a model, a producer and a blogger. I love seeing all the aspects of one industry. By producing fashion, talking about it and modeling it, I pretty much have it covered.
My next big step would be to create fashion and have my own label I believe. The food industry will be my next target. Step by step.

How do you feel toward your fans?
I love the feeling of having people who are listening. I feel like I am not doing this only for my self but also to make an impact on the lives of the people who are following me and listening to me. That’s the greatest part of this job. Making a chance on other people’s lives. That’s really what matters the most.

How do you like to describe yourself?
Real. Simple. Kind. Fun. Quirky.

And your body?
Fluffy pillow material.

What do you identify strongest with?
What country girl things do you do?
Oh so much! I cook like a country girl, eat like one and sing like one. I am the total package. I live in the city but I belong to the country!

What kind of imagery would you love to create but still can’t yet?
Our industry is missing something bold and daring without being cheesy or trashy. The taste level of the plus industry as a whole still has to evolve. I am happy to be an active part in that process.