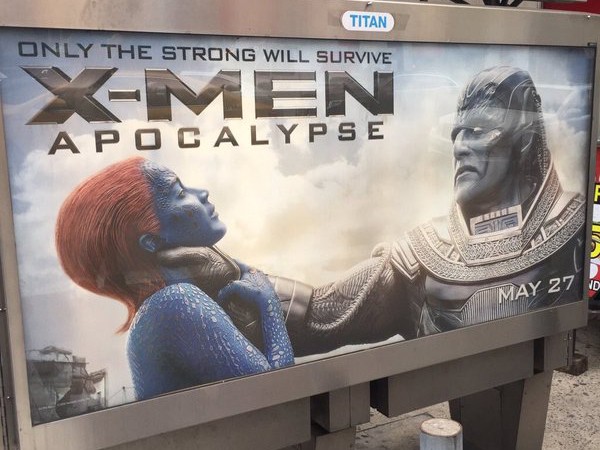 Rose McGowan Calls Out Hollywood for Romanticizing Violence Against Women Again
by Ashley Hoffman | June 3, 2016 at 11:59 AM

We’re talking about how an image for a movie starring one of the most successful women in the media today and how it’s sexist because of Rose McGowan.

McGowan has been a vocal advocate for intersectional feminism for a while now. Chatting up a storm with Bret Easton Ellis, her social media, and on the ground, she doesn’t sugarcoat it.

Now she’s in your newsfeed for criticizing 20th Century Fox for this latest charming X-Men poster featuring Jennifer Lawrence, (as the shapeshifting Mystique,) and her oppressor, a stone-faced terror (who has her in a chokehold.) The tagline: “Only the strong will survive.”

(Expletives replaced.) [Screw] this [stuff.] Which studio did this?

She went deeper with The Hollywood Reporter, saying, “there is a major problem when the men and women at 20th Century Fox think casual violence against women is the way to market a film. There is no context in the ad, just a woman getting strangled. The fact that no one flagged this is offensive and, frankly, stupid.”

The vocal people of Twitter hated it too. Seeing women as the victim is an enduring fashion ad trendlet too.

Tuning in out of context, it’s an interesting choice to freeze frame THIS and say YES! this should be the public face of the film. The strong people survive, that the tough women get through it sentiment could very well be about how blue spray-tanned J. Law is about the drop kick this guy and in the words of Nicholas Cage in Conair “save the [freaking] day.” But seeing as recent stats show that 1 in 3 women worldwide have experienced violence, according to the Who Media Centre, so no it’s not in great taste.