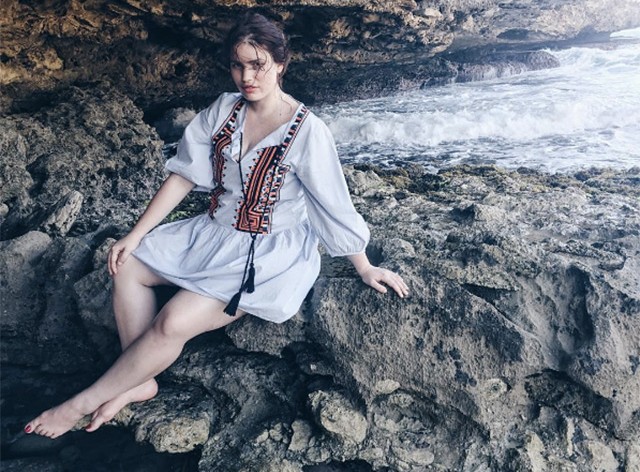 Clémentine Desseaux, #RunwayForAll Model: ‘My Size and Look Were In the Way of Me Feeling Invincible’
by Ashley Hoffman | June 1, 2016 at 7:47 PM

You got to give it to Instagram for giving women the platform to show that yeah, they’re actually totes down with their bods despite what anyone might say, and now the platform itself has a new initiative that will actually do some good.

It’s #RunwayForAll, and with this campaign they’re sharing the stories of five really strong models with all 162 million of their Insta followers to get the conversation going about fashion’s enduring trendlet (that’s starting to chip away,) a lack of say it with us…diversity. According to Instagram, all the models were chosen because they redefine industry standards.

You know we’re about crashing the runway so INTO IT.

“Our goal is to highlight some of the bravest and most creative models on Instagram who are building their own audiences and telling their own stories. These breakout stars aren’t conforming to the industry’s traditional mold, and in fact, are redefining it.”

They got already internet-famous people Shaun Ross of TED talk and Beyonce fame, Mama Cax who is bae and has a disability and RunwayRiot’s own curvy contributor and partner Clem, just launched today. Read her words and the words of the others below. Clem’s invincible now.

“#RunwayForAll is a world where everyone is treated the same,” says Shaun Ross (@shaundross). When he started modeling nearly a decade ago, Shaun was the only male model of color with albinism. “I remember when I first entered the industry all I saw were models that looked the same,” he says. “Now here we are almost 10 years later, and I see the choice I’ve made has helped the industry to see beauty in many ways, such as casting models and rising icons like @winnieharlow, @jilly_peppa and more to help lead the fight with me to diversity.” When he started, Shaun was one of a few openly gay models in the industry. “Agents always told male models to be masculine, but that was never the case for me. I never wanted to hide my sexuality,” he says. “I’d rather be myself.” Photo by @shaundross

“#RunwayForAll means any teenager feels represented when they open a magazine or watch a fashion show,” says Mama Cax (@caxmee). Mama grew up in Haiti, lives in New York City and never aspired to be a model — “not only because there were very few dark models on magazine covers but also because I grew up with very little knowledge of the fashion industry,” she says. “Eight years ago, after getting my leg amputated, the idea of being a model was even more far-fetched.” Today, Mama is modeling and doing other things that she was told there was no audience for, like sharing tips for traveling as a black female amputee. “The majority of humans do not look like the mainstream idea of beauty,” she says. “One of the greatest barriers is not belonging. Through modeling I hope to show that beauty does not always wear a size zero and beauty does not always walk on two limbs.” Every day this week, we’ll be sharing the story of a model who is redefining industry standards and making sure there’s room on the #RunwayForAll. Photo of @caxmee by @simonhuemaen

“#RunwayforAll is not so much about what we look like anymore but more about what we represent,” says Clémentine Desseaux (@bonjourclem), who grew up in France. “I was always way bigger and taller than everyone when I was growing up, and I had those freckles,” she says. “When I saw the first plus models out there, I started thinking about trying it out. At that point I had no idea it would take me to where I am now.” Three years ago, Clementine moved to New York with $2,000 to her name and never looked back. “My size and look were in the way of me feeling invincible when I was young,” she says. “I hope I was the last generation of women to think like that. Role model is the new top model.” Every day this week, we’ll be sharing the story of a model who is redefining industry standards and making sure there’s room on the #RunwayForAll. Photo of @bonjourclem by @emmaandhercamera