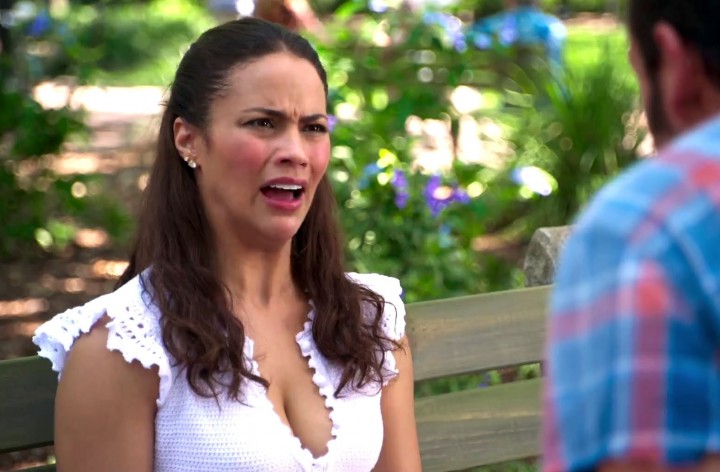 The Do-Over Really Objectified Women’s Bodies More Than the Average Flick
by Ashley Hoffman | May 31, 2016 at 9:53 AM

Adam Sandler still deserves credit. I’m personally still clinging to the 342,093 formidable things he’s done.
A guy gives you the most quotable lines ever with hit after hit and then gives you some total misses, and we write him off? Not totally fair, but The Do-Over made women and their bodies laughable to the point that it was actually shocking even for a film about how two middle aged men take back the debauchery shtick.

The Do-Over is about how two old high school buddies: one spineless (Spade playing the loser deal well,) and Max who’s immediately remove your bikini cool (Sandler, doing a fine acting job.) No one was more invested than Adam Sandler and David Spade in the acting, and they’re arguably two of SNL’s most valuable players ever.

Max essentially kidnaps his old buddy on a quest to reinvent their lives and there are also top secret science, spies, and explosions. The audaciously all over the place, implausible plot is just TOO SMART to untangle, but in a world of films where on occasion, women’s characters opinions are limited to whether or not they should coyly flash you, this one’s a real gem. I’d give up following the plot, but it was easy to follow how much women suck in this world.

To be totally fair, if you look at all of the stuff Sandler’s written, he doesn’t have a noteworthy woman problem compared to the others in the mix. In this movie though, this is basically what not to do with female actresses.

Pull up your boat, insist that they remove their bikinis (not so surprising.) Have them emasculate your friend and throw their heads back in laughter because he has a disappointing package. Then shoot at them with a flare gun because best buds, and send one woman flying off of the boat and into the water head first. Gorgeous.

In this movie, Natasha Leggero, who is the best spark plug ever, who frequently luxuriates in how unnecessary pants are, plays a total “hose bag” whose hobbies including humiliating her husband by grinding on a loser, and lying to him and excluding him. There’s also the crazy stalker wife who Max treats to his body so as not to leave her hanging with a lot of fun degrading animal metaphors for women. Later on, we meet a sweet innocent widow in a frilly white dress who of course turns out to be crazy, murderous and greedy. There’s a gloriously gratuitous fight between two women, which the main dudes enjoy immensely. Even for a large part of the most intimate scene, you don’t even see the woman, but you do see some very graphic shots of a dude.

We expect sexy dressing and women who are inexplicably enthralled with the main guys, but The Do-Over was so gratuitously awful toward the women in it. And it kind of stops being harmless when it’s one off the rails crazy broad after the other. The wife does have a heart, even if she’s mostly just nutso, but the movie spends most of its time making fun of how ridiculous the women are.

Is this a comment on how women and their sexual freedom really turns them into raging jerkholes just like the dude bros? It’s hard to tell, but the movie isn’t too self-aware about having zero favorable female portraits. All we can do is hope for just one cool girl like we’ve seen in Big Daddy, Happy Gilmore, Reign Over Me, and Happy People next time around. Dream big.