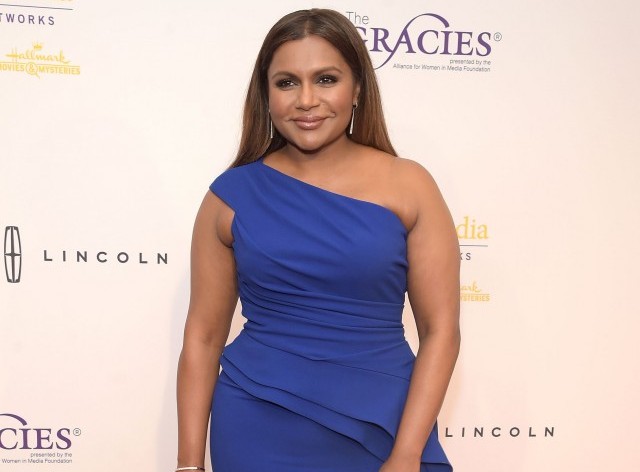 Let’s Fangirl Over How Majestic Mindy Kaling Looks in This Stunning Gown
by Ashley Hoffman | May 27, 2016 at 12:03 PM

Author and thrifty with meat Mindy Kaling rolled through Beverly Hills the other night to sweep up her award for Outstanding Ensemble cast to the 41st Annual Gracie Awards wearing this.

It’s an Elizabeth Kennedy gown, and Elizabeth was the designer who also did her Oscars look, so we know stuff of hers fits women who fill out fancy threads with some curves. At just 22, Elizabeth worked under Isaac Mizrahi and then Donna Karan after that, both designers who do “get it.” She does red carpet things now, all glamorous, heavy on the jewel tones. If there was one pesky thing about this look, it’s only the dress didn’t cut oddly on her right boobage. But the color is so devastatingly statement-making in a way that says, “I made it long ago and you’re all students,” and the tailoring is on point.

We did notice that suspicious fans are upset, claiming she is altering her face in an elective surgery way, to which we say, we don’t know if or what happened, but she’s a dreamboat. It’s such elegant timing, because recently, hilariously the Schum (Amy Schumer,) joked that Mindy Kaling would have to wear the AIDS quilt to the red carpet because designers are insufficiently jazzed about dressing curvier ladies. Elizabeth Kennedy is on board though.

Thanks for doing you Mindy, and thanks for saving a slider after being five drinks deep.