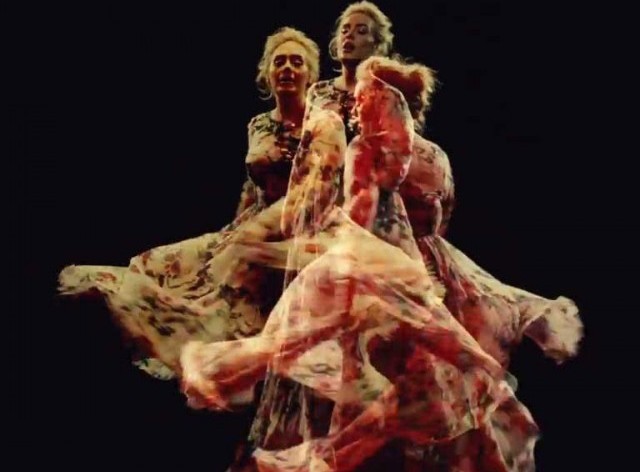 On Sunday night, Queen Adele debuted the music video for her single ‘Send My Love (To Your Lover)’. Of course people were excited to see her clad in custom Dolce & Gabbana, belting out the melody, but since Adele was just standing there in all her glory, viewers seemed to be distracted even more by her weight.

The reports of her losing weight and going to extreme measures to lose a couple of dress sizes has been fiercely reported since the music video debut, with The New York Post speculating that she has “dropped 30 pounds from her 5-foot-9-frame.” And while this is all speculation, it takes a real talent to be able to stand still in a four minute music video and command the attention of viewers without even a single wardrobe change. Why focus on her weight? What’s the point of saying ‘I wouldn’t like her if she lost weight’ or debate about how it affects her talent? She’s clearly happy, healthy and has continuously made conscious efforts to dress her body the way she likes. I understand that for a lot of women she is one of the few figures in mainstream music that actually wears a size like the majority of women, but shaming her about the possibility of losing weight is just the same as shaming someone for being curvy.

And in her Rolling Stone interview only a couple of months ago, she readily admitted, “Would I show my body off if I was thinner? Probably not, because my body is mine. But sometimes I’m curious to know if I would have been as successful if I wasn’t plus-size. I think I remind everyone of themselves. Not saying everyone is my size, but it’s relatable because I’m not perfect, and I think a lot of people are portrayed as perfect, unreachable and untouchable.” So instead of guessing how much she weighs, if she is on some extreme diet or feeding into the gossip of what people think she ‘should’ look like—realize that judging her weight is no one’s business but her own and just enjoy the video from this true talent, it really doesn’t have to be that deep.