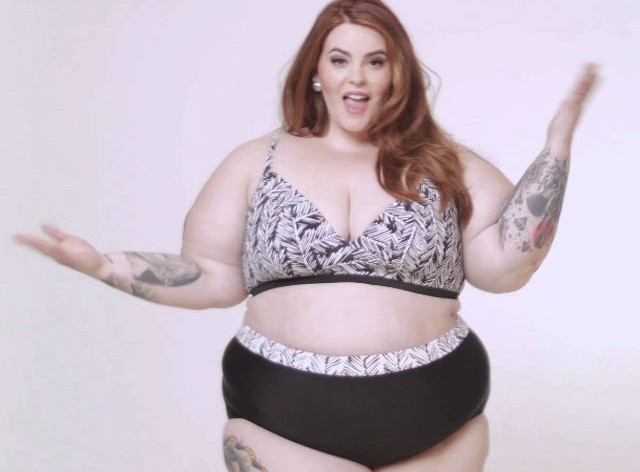 Apparently Seeing Tess Holliday In A Bikini Is ‘Undesirable’ To Facebook Viewers
by Lindsay Peoples | May 23, 2016 at 10:52 AM

Australian feminist group Cherchez La Femme is fighting back Facebook’s viewers terms after its posts were deleted in an advertisement for an event ‘feminism and fat’ that sites its topics as “body acceptance and positivity, bodily autonomy, fashion and the policing of women’s appearances—to name a few.” And while their intentions may be good, in aiming to shed light on the misogynist policing of women’s bodies, the images they used to promote the event were taken down.

The feminist group used a popular image of model and activist Tess Holliday from her Simply Be campaign, and while she didn’t have anything to do with this movement in Australia, the photo has been posted millions of times, and she is noted to be one of the group’s biggest inspirations.

According to BBC, Facebook told the group that the image “depicts a body…in an undesirable manner.” Now look at the photo above, and read that sentence again—what is undesirable exactly? And while Facebook allowed the group to keep the event page up, the photos teasing the event were taken down and the group is no longer allowed to promote their body positivity event.

The kicker is that the Facebook Ad Team noted, “Ads like these are not allowed since they make viewers feel bad about themselves.” And their suggestion for a replacement image was of someone “running or riding a bike.” This would almost be a hilarious joke if Facebook’s Ad team quickly realized their mistake, but for some reason which we cannot find on this earth, seeing a curvy woman in a bikini is undesirable enough to be banned on a public social media network. Kind of makes me want to start posting a bunch of bikini pictures on Facebook and see how undesirable things get.