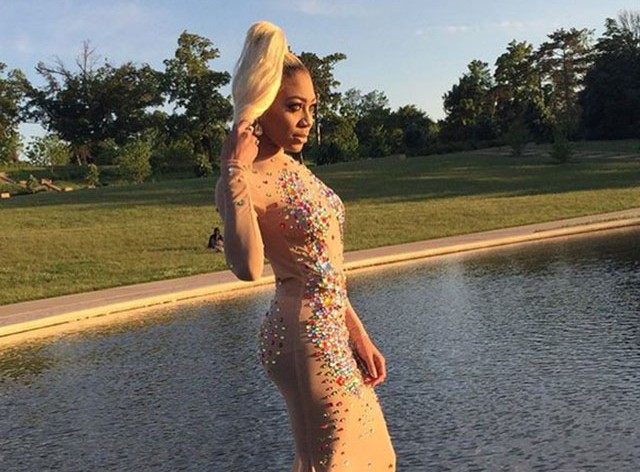 It’s warm out, which means another day another young woman getting bounced from class or the prom for wearing something “inappropriate.” You all know how a young woman showing her body takes such a toll on young minds, and that the capacity to have a solid future decreases by 30-40% when a high school senior wears a low neckline. Anyway, DIY copycat of the stars India Ross wore Beyonce’s 2015 Met Gala dress, and while the media’s throwing a party befitting of the sparkly viral hit, here’s the outrage:

“Why is a young woman emulating Beyonce in her naked dress instead of her mom?
I think it’s sad when young ones today can’t/won’t be themselves but must emulate someone other than their parents like we did years ago! The dress is without class mainly because it damn near shows everything… I remember years ago the saying was the less you show the more appealing you are!!
The aspiring fashion designer totally slayed the game. Well, I don’t think this dress would make the cut at the Tillamook High prom on Saturday… wink emoticon Although as a chaperon I saw girls that were wearing less revealing fabric than this girl, but all that grinding (and twerking) they were doing kind of made the point of looking “decent” a little bit useless… wink emoticon”

Her mom is crazy…No way Jose. Her slaying that pose? With her proud mamma next to her? This is her moment. She can do other things with her life that are truly fulfilling, but they won’t make the news like this. Of course people are celebrating her. She wore the most culturally relevant woman’s most noteworthy gown, and her sparkle placement is on point.

“This woman is not a roll model, any parent that would allow there daughter to wear this inspired dress for a prom, is nuts. beyoncé was once class now she is trash.No Cosmo, No she did not. She looks like she is in a giant body condom pantyhose that is the wrong shade plus she went crazy with a bedazzler this is worse than costume quality, and does not look even close to good enough for a formal prom. I think she did a super classy twist on it, if you’re going to hate on it or Beyonce, I don’t get why it is okay for this girl to dress in this type of dress to her prom and it’s okay but a couple of weeks ago, a girl who was slightly overweight and busty was denied entry to her prom. She was covered except for the dress being strapless but her boobs weren’t hanging out. She was just busty but she was covered. Yet, this is okay? Not only is this inappropriate attire for high school students, but this is fat shaming and discrimination. This really pisses me off.”

It’s O.K. for her to wear a skin-tight nude dress that leaves “little to the imagination” because she wanted to.

Oddly enough, The Washington Post’s critic Robin Givahn also criticized grown woman Beyonce’s naked dress for being light on the fashion, and all about her body. Others did too. We’ve always said this and we’ll say it again. Beyonce did not get on the cover of TIME by wearing a pants suit. She is an incredibly talented vocalist, performer, and now visionary socially minded artist. But this stuff’s a visual medium, and she’s actually influenced a ton of women to love their curves by throwing a party for her shape.

Plenty of moms allow their young daughters to wear whatever they want, bedazzled or not. One commenter raises the question of how students are treated differently depending on their height, the way their weight, boobage, what have you, are all distributed. And that can be the case in some instances. But why so much shame for this young woman? It’s totally a college-bound 18-year-old woman’s decision to reveal as much as she wants. Stop slut-shaming a a girl who’s clearly resourceful, spunky, and full of promise. Slay on, India.