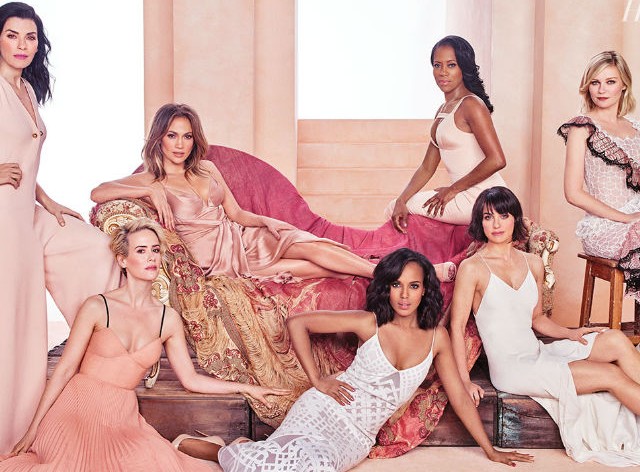 Kerry Washington and J. Lo Prove Women at the Highest Level Are Still Dealing With Sexism
by Lindsay Peoples | May 18, 2016 at 7:40 PM

A lot of times magazines get it wrong when it comes to group covers—usually there’s little to no diversity, and the opinions of the women included are so narrow that it doesn’t relate to women of today’s times. And while a lot of glossies preach that inclusion is important, we all know it comes down the fashion editorials to see who really matters enough to spend money on and invest instead of just writing up a short piece on a person. Just last year The Hollywood Reporter got in a bit of trouble when their 2015 Actress Roundtable had 8 white females, which commenters mocked because the women pretty much looked like the same person in different forms. Luckily Hollywood Reporter wised up and their 2016 Actress Roundtable features Kerry Washington, Jennifer Lopez, Sarah Paulson, Julianna Margulies, Regina King, Constance Zimmer and Kirsten Dunst. These women all represent various parts of Hollywood and talked about their struggles in a world that consistently challenges their value as women who refuse to fit into a certain mold.

A few notes that stood out—the fact that Jennifer Lopez has been called a diva basically her entire career, Sarah Paulson constantly being asked to dye her naturally brown hair blonde for roles, and veteran actress Julianna Margulies still fighting for acceptance. It really makes you realize that even women that are extremely accomplished in a public way are still asked to do things to make themselves appear a certain way—usually to appear more attractive to the opposite sex. Paulson added, “I don’t mind it, I like the blond — but to be told that in order to be considered a romantic lady opposite some hunky guy, I need to have long blond hair that looked very L.A. Real Housewives? It does do something to your brain.”

Another interesting part of the conversation resonated with me when J.Lo commented on being perceived as such a diva, and hard person to work with. And while I’m a personal fan of her love of excess diamonds, and did a re-enactment of ‘My Love Don’t Cost A Thing’ for a talent show in middle and high school, it probably doesn’t feel good for people to treat her differently because of it. Lopez said, “I got a moniker of being “the diva,” which I never felt I deserved — which I don’t deserve — because I’ve always been a hard worker, on time, doing what I’m supposed to do, and getting that label because you reach a certain amount of success. I was always fascinated by how I could see [a man] being late or being belligerent to a crew and it being totally acceptable; meanwhile, I’d show up 15 minutes late and be berated. And you watch this happen over and over and over again. Like, we’re not allowed to have certain opinions or even be passionate about something, or they’ll be like, “God, she’s really difficult.” Its like, “Am I? Am I difficult because I care?”

Am I the only one reassured by the fact that J.Lo still has to fight for things she wants to? It doesn’t solve all my problems with the lack of diversity in fashion, but it does make me weirdly feel like I have a camaraderie with women all over the world who I don’t even know, rioters who are voicing their opinions no matter the cost.

In the end, I also learned that the power of freedom comes from creating your own platform and stories that can reach people. It’s one of the reasons why I’m a RunwayRiot contributor, and it’s incredibly imperative for women to find outlets that make diversity of women in a positive light a priority. Margulies closed by saying, “That’s the power isn’t it? In creating your own stuff. More and more women of every shape, size, color and age need to just start creating their own stuff—to make a door for ourselves to walk through.” All hail queen Julianna.