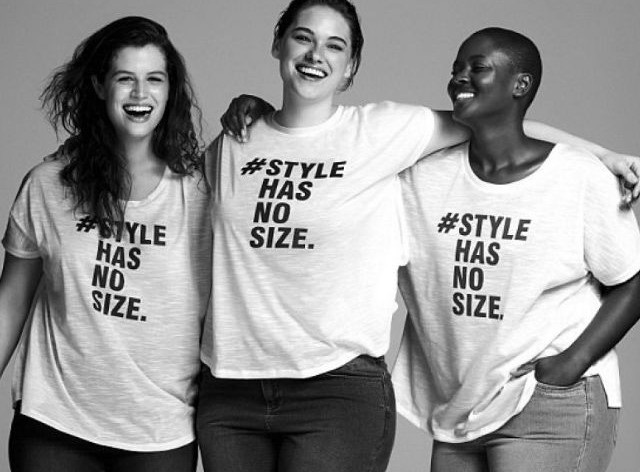 RunwayRiot Busts All the Weak Reasons Retailers Say it’s Harder to Make Clothes for Curvy Women
by Lindsay Peoples | May 10, 2016 at 5:25 PM

The question as to why so many retailers are still ignoring curvy women is often debated, and I don’t think there will be a resolution until people come to the realization that a lot of it boils down to a really ugly thing we call: discrimination. Over the years, I’ve personally asked designers why they haven’t tapped into the curvy market, and while most dodged the question with an awkward laugh and pause, some readily admitted that it just wasn’t their focus and that they didn’t want to lessen the brand or offend their customers who wear sample sizes by expanding sizes (yes the fashion world is that shallow). Today, Bloomberg reported on various reasons as to why the clothing industry isn’t catering to curvy women which make up roughly $20 billion in the market according to NPD. That’s no small piece of the pie for any designer, so there has to be some explanation for why designers aren’t moving in the right direction faster.

One section of the article listed considerations that designers have to make when designing for curvy women—whether it be making larger arm openings for comfort, finding a different fabric since silks and natural fabrics are durable but don’t have a lot of stretch. As someone who adored draping class in fashion school, I find this particularly hilarious as an excuse or reason as to why things aren’t looking as they should in the curvy girl department. So to keep up with the laughs, I’ve listed some fake reasons retailers actually use to justify complications when making clothes for curvy women.

Using More Fabric Makes It So Much More Expensive

More yardage of fabric is used when creating clothing for curvy women, but does that mean that companies are going broke using so much fabric to create clothing for curvy women? Hardly. No one on the face of this earth could ever convince me that using more fabric is detrimental to a company. After all, companies like Old Navy have charged more for women’s items but kept men’s larger size items the same price. Minimizing waste is very important as a designer, but I’ve seen first-hand how designers hire the right team to use every bit of fabric in a smart and efficient manner to create more for women of all sizes.

Well this one is kind of true—but it’s still not a good enough reason. If you’re renting out an old factory, with even older equipment, the chances that you’re going to be making a lot of different patterns and sizes is pretty low. However, for a lot of the mass market companies who have tapped into the curvy girl market, they’re seeing a spike in profits that they haven’t seen before. Companies like Aerie have seen a 15% sales growth, while similar retailers like Abercrombie and Fitch’s sales have suffered and Aeropostale recently filed for bankruptcy. All that profit should be used to further cater to most of your business which is basically business school 101.

Fit Models Can Only Do So Much

The sizing prototype has got to change. This is something I didn’t learn until I started interviewing designers, and it explains where a lot of the headaches in sizing come from.  Not all designers are using fit models for shows; a lot of them just use measurements from the previous season, and think of it as one-dimensional item. And if all these designers are using the same fit models, and the same proportioned mannequins, it’s naturally going to cost more to get a wider viewpoint of the clothing on different shapes and size instead of cutting corners and just fitting it on one size. Parsons students are on the right track in demanding larger mannequins because it makes a difference when it comes to producing clothes.

I hear this all the time—designers spend so much time making curvy girl clothing flattering for their body type. This point is purely subjective and based on the designer’s preference. What looks good on a slimmer woman versus what looks good on a curvy woman is based solely on opinion. While there should always be consideration for the type of woman one is designing for, curvy women want the same fashion as everyone else. There is no need to hire a separate design team. In my opinion, the only outside expert that should be hired is a stylist that has worked with curvy women to show how to put pieces together and wear in versatile ways. There may be more variables when considering and designing for a curvy woman’s bodies, but we’re worth it.