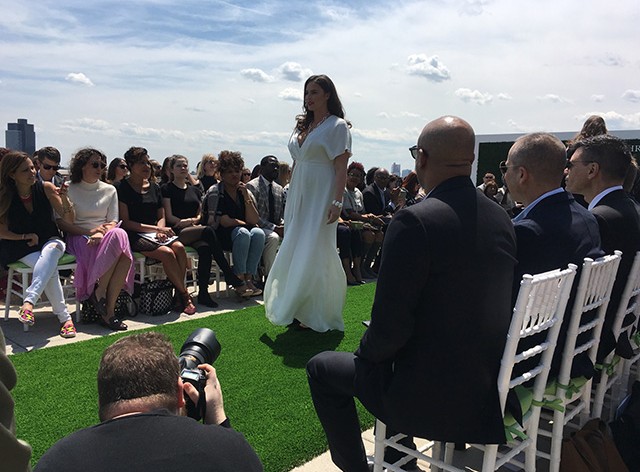 Candice Huffine Tells RunwayRiot That Fashion Needs to Go Farther and That She Wants to Design to Be a Part of the Change
by Ashley Hoffman | May 9, 2016 at 4:02 PM

Candice Huffine, body positive homegirl of the internet, is unstoppable. With splashy campaigns, steady eyes that lock on you and a thoughtful, made-for-meme eloquence about inclusion, she’s ready for more diversity.

Logic is something that applied to Lane Bryant’s decision to have Christian Siriano show a sexy collection today. Candice and a battalion of other models, bloggers, and even actress Danielle Brooks walked the runway on a terrace at the UN, an appropriate venue for a collection this current, sexy, and sheer. Candice, in a light-as-air white gown, closed the show along with Ashley Graham. Logic is something that has also followed Candice throughout her red hot modeling career, which is a strong predictor that body positive fashion and one of its most impactful faces at the forefront of the movement will be going farther and fast. Just recently, Candice made the public declaration that she works out to feel good, and that as a model, she knew there was ‘no way she could move bone.’

After a few “yes honey’s” from the crowd, by the show’s end, Candice talked to RunwayRiot about how she wants to design clothing and be a part of the change, that she’s only gotten support from models who are slimmer, and how women aren’t separated by size so fashion shouldn’t be either.

In your letter for Rachel Roy, you said the future is bright. What are some things specifically you’d like to see?
I think the possibilities really are endless and that’s not me just skirting around the question. I can’t tell you what’s next because I’m along for the ride just like anybody else, but what I do know is that there’s no end in sight and it’s going to be huge. I don’t even think we’ve touched a quarter of what the possibilities are. We haven’t covered makeup campaigns and TV can be worked on more. There’s just tons of opportunity to continue to add diversity, and its’ always a win win. It’s a positive thing. Have you ever heard anybody say, ‘that was a terrible idea.’ No way because that’s the world that we live in and everybody is embracing that and appreciating it and loving it and owning it, so the whole the industry is going to be showcasing that. It already is. We haven’t even seen the beginning yet.

What was going through your head on the runway?
It just feels good up here. The day is beautiful. This dress is stunning. I feel so beautiful. To know where we are is just the most powerful thing. I have lived in the city for thirteen years. The fact that Lane Bryant’s doing it, they have such a strong powerful message, and I know we’re going to hear from powerful, incredible women, it’s just really perfect.

Compared to other models, you always use the word “we.” What specific ways have you supported each other?
The crazy thing is I think we, we! There we go again, we we! I’ve been doing this for sixteen years. There’s a lot of girls here with me today who have been doing it just as long and we started when we were kids and also the industry was a baby as well, the plus modeling industry. I feel like everyone grew up together. We’ve seen it from start to a never-ending finish because there won’t be and we’ve all become a family. And the reason why it’s so easy to use the word “we” is because we have so many platforms now, for communicating each other and supporting each other. That’s why I do feel it’s a collective, when you’re putting your heart into something and putting it out there, someone is seeing it and supporting you. You’re not thinking is anyone feeling the same way or is anyone frustrated or is anyone proud? Is anyone as excited as I am? And so we are all in it together because we have the same common goal and we’re not afraid to talk about it. The social platforms have made it a community. All the women know each other today and they’re so proud of each other. Everybody wants the best for each other, everybody’s been following everyone and there’s no jealousy. When an amazing thing happens for a curvy model or a curvy blogger, woman designer, anybody, there’s women here writing books highlighting curvy fashion. I always say all ships rise with the tide.

What about support for models that weren’t necessarily about the size diversity cause?
I’ve been on a lot of sets with different size models, mainly skinnier models, they’re super positive and supportive and they’ve been following my career and they know curvy girls who are doing big things, and they have amazing things to say like “hey congratulations, that was so beautiful, that was so necessary, that was such a great moment, and I’ll never forget that cover,” and it’s just like, why did we ever separate ourselves because the world isn’t like that, women aren’t like that. Bodies are all different, it doesn’t mean only skinny girls hang out over here with each other and only plus girls hang out over here. It’s not like that. Nobody operates that way so why should fashion?

Why is a show like this good for everybody even people who aren’t on the so-called curvy side?
For lack of a better word, it’s just taking a weight off of everyone’s shoulders. If you’re a 4 or a 14, it takes away the stigma, the stereotypes, the pressure, the constant looking at body and weight and the importance of size under a microscope. When that gets eliminated, it opens up such a beautiful playing field for being super powerful, starting businesses, getting your message across, and it’s not just women talking about what size their hips are. I know we are capable of so much more and when we remove all this body infatuation and say you are beautiful, you are you and I am me, it makes us unstoppable.

Speaking of being unstoppable, what do you think is next for you?
I always say who knows because the great part about this industry is that you don’t know what’s around the corner and I’ve always been along for the ride in the best ways, but I know the things that I’m passionate about, and one of them is designing fashion as well. I want to be someone who is a part of the change as well, so who knows when that is, down the road. It’s something I have my eye on. I’ve been talking about fashion for years. All of the women in this room have been and you know we’re always like hello, ‘hear us hear us!’ And people are hearing us. Look at Lane Bryant and their collaboration with Christian Siriano. I could walk out with that moto jacket today and that’s the same jacket you’ve seen on the runways. It’s the same current fashion, finally and that’s the really exciting thing. There are whole new doors and roads to go. I think every girl thinks what would be next. Firstly, I don’t want to end this anytime soon. I feel like I’m just getting started because we have so much yet to accomplish so I want to be at the forefront of that as much as possible.

What do you want from designers right now?
The crazy thing is there’s a lot of designers that are carrying up to a 16 by the time you do a conversion, you know if it’s Italian sizes or French whatever. When I go onto a website that’s carrying high high high designer labels, I immediately go to size chart, and eliminate all the rest and there are quite a few designers who go up to a 16, and I know that’s not the covering the scale we need to, but I just want to see them go further. Why not? We all are ready to shop, and feel beautiful, look beautiful. Everyone can do that in their own way, but if you crave your investment piece, you want to be able to have a place to get it.

Right, people ask, how come you like your life even though you’re not a size 0?
I know! Things as simple as ‘what is your favorite song right now?’ Nobody asks that, probably because they don’t care. Because the thing is, our interviews are so solely based around body, which is incredible because yes, the conversation should never stop, but also eventually, it would be nice for you to know that there’s so much more to every single one of these girls than the size they are. Once we can take that weigh off of everyone’s shoulders and people are confident and comfortable and happy and feeling great about themselves and wanting to conquer the world at whatever size they are, then we can talk about the fun stuff and get to know the girls maybe a little better? There is size infatuation always, and fair enough, talking about it all the time has made a difference.

So what culture are you into this summer?
I’m trying a lot of different projects. I started Djing recently, how cliche, I know, but I live here in the city, I’m married, I love live music. We like to enjoy concerts as much as possible, buy all the concert tickets, jam out, have fun. Work doesn’t stop during the summer. I think it’s better to always be asked about body positivity and its direction and talking about the word “plus” and that’s fizzling out. A lot of people aren’t asking how you feel about the word anymore, so I do think we’re making a lot of progress. Because that wasn’t getting us anywhere just to sit and define the word all the time, you know? If you talk about it on a grander, body positivity as a whole sizes, then you can cover more ground and really make a bigger change. But I loved all your questions there weren’t any I would say stop asking me.