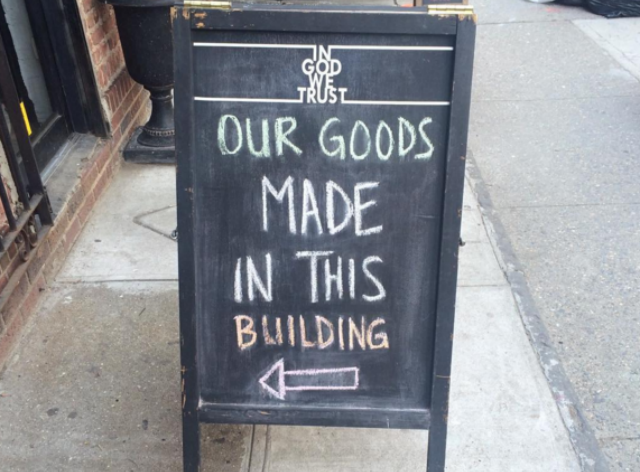 ‘Sorry, Nothing Above a 6’ RunwayRiot Tried a Bunch of NYC Boutiques and They Still Don’t Have Enough Larger Clothes
by Amanda Thomas | May 3, 2016 at 5:36 PM

Last week, at my editor’s request, I tackled the Soho boutique scene. Coming from the heart of Texas, Dallas, there’s a growing boutique scene, but it has nothing on New York. Needless to say, I was a little intimated walking among the other fashionable shoppers on that rainy Thursday. Not only do I have little experience navigating New York boutiques, but I was pretty sure there wouldn’t be anything in my size (14/16) and that salespeople would be quick to tell me.

I am happy to report that I emerged unscathed and surprisingly, not discouraged. Not so surprisingly, none of these boutiques carried clothes above a size 14, and only offered sizes labeled as letters. Pink Yotto, a tiny unassuming pink boutique that sat on the corner of the block was the first store I stepped in. After browsing around the store, my eyes landed on a white floral romper. The salesperson was giving style advice to another customer, who was modeling the clothes for her. She was sweet when I asked for her help and she explained to me that they only carried sizes small and medium, but she quickly assured me that the sizes were more like small/medium and medium/large.

My next stop was around the corner, In God We Trust. IGWT a boutique that houses clothes from their studio based in Brooklyn, which only has three seamstresses. It was an incredibly laid back place with dark wood and plants. As soon as I walked into the small space, the salesperson was eager to help. I browsed and noticed that this boutique offered up to a size large. I asked the salesperson, what did a “large” actually mean. She got up from her desk to speak to me and she showed me around the store, telling me that the sizes were dependent on the piece and the cut. She then pulled out pieces that she described as not being as narrow as others, and suggesting that I could fit them. (I didn’t end up trying anything on.) Being a very attentive salesperson she told me about the boutique and offered me a card. I graciously accepted. 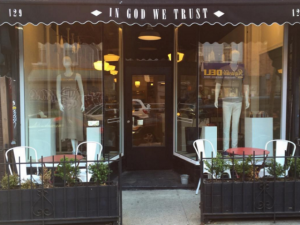 I wandered around until I ran into Tibi. The name was familiar, but it I never looked at the clothing. To my delight, it was totally my style, but predictably, they only offered clothes up to a size 12. When I asked about a one dreamy summer dress, the retail worker said their clothing only goes up to a size 12. She then offered to see if they had any 12’s in the store for me to try on. I followed her to her computer as she looked. Knowing that I wouldn’t be able to fit a 12. She told me there weren’t any 12’s downstairs, and I began to say “oh no, it’s okay” but she beat me to an explanation. She told me that they didn’t have anything above a size 6. It made me wonder how many 12’s they actually make each season compared to the smaller sizes.

A similar situation happened when I walked over to Olive & Bette’s, another tiny pink boutique. The clothes were fringe, tie dye and graphic tees…not really my style, so I wasn’t too discouraged to see that I could only find mediums. I noticed this boutique had three salespeople instead of one like the others and they were little bit busier. I was eyeing a short black dress when a salesperson finally asked if I needed help. I asked her my standard questions and then asked if they had the black dress in a large. She looked on the computer, walked back around the counter and placed her hands on her face Home Alone style to tell me that she couldn’t find a large. She apologized profusely so I thanked her and made my exit. LF boutique and Opening Ceremony offered clothes up to a size 14 and they were the only boutiques I tried that did so and also had those sizes readily available in clothing that I was interested in.

I ultimately decided to not try on anything in fear of being caught stuck in a dress I eyeballed incorrectly. Although, the boutiques had very few things for me, the sales associates were incredibly kind, accommodating and willing to speak to me about their clothing and sizes. I felt like they understood that brands should have a better variety of clothing and they genuinely wanted to help me. Their kindness doesn’t excuse the lack of clothing sizes, but I never left a store feeling bad about my size or discouraged. More options, and the customer service will really be great.