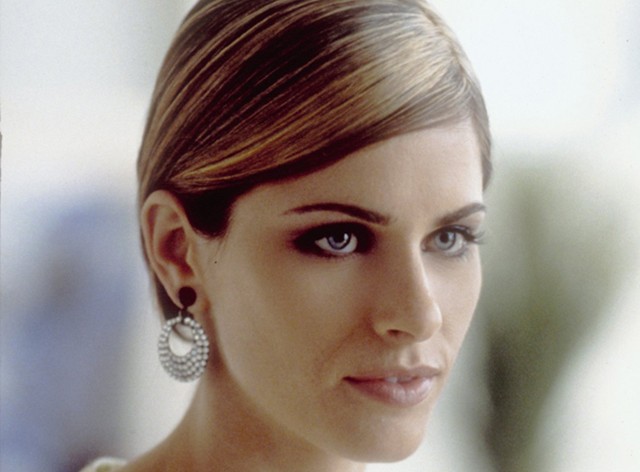 In a recent Lenny letter, Amanda Peet, who was our uptown style inspo in Igby Goes Down, wrote this.

“It’s painfully obvious, but I’m still ashamed to admit this: I care about my looks. How else can I explain my trainer, stylist, and Barney’s card? I’ve bleached my teeth, dyed my hair, peeled and lasered my face, and tried a slew of age-defying creams. More than once, I’ve asked the director of photography on a show to soften my laugh lines. Nothing about this suggests I’m aging gracefully.”

Unfortunately women are still so ridiculously judged by their appearance, that all of the stuff she’s done, in the Hollywood limelight no less, is totally expected, and what’s more, nothing to be ashamed about. Interestingly, Denise Bidot, mother of all good vibes, actually Instagrammed a before picture of her chompers pre-whitening, making the artificial transparent. But if you’d like to keep your artificial flavorings to your look a secret, that doesn’t make your freedom to do your face YOUR WAY another brick in the wall that is the tyranny of the fashion industry’s advice to us – LOOK SLIM AND YOUNG OR ELSE.

Also this week, the the Guardian ran a piece calling for women to stop dying their hair. It was about one women’s decision to ditch the bottled blondeness and go grey to set a good example. Much judgment on herself and the industry is deployed in this piece. She’s right about one thing. There’s a ton of costly upkeep that goes into faking the truth.

She wrote,
“I want my children to see what a real live middle-aged woman looks like. There aren’t really any grey-haired women under the age of 50 in the public eye.”

Her intentions are excellent. Women do throw down a crazy amount of change on artificializing themselves. But doing this doesn’t mean you hate that punk bastard known as time, or that you live in fear of looking like an old, or that you’re superficial. If you enjoy a hair color that isn’t your natural greying hair when the time comes, and the occasional enhancing outfit, that doesn’t mean you’re doing self-acceptance wrong. Ilana and Abbi would be just as jazzed about Hillary if she stopped dying her hair.

The thing is there are other reasons to change your look, hide things you prefer to hide than vanity, but vanity is fine too. It’s all just a good old expression of self, and it doesn’t have to mean we’re all desperate to keep a death grip on our youth or anyone. A woman’s personal decision to do anything that makes her look that way is totally her own. And having filled in wrinkles or dyed hair shouldn’t mean you’re furthering the cause of making women feel bad about themselves. That’s a lot to hang on whitening paste. If that’s what befits your look, so be it.

We need to get people psyched about being totally themselves, but it’s also silly to shame women who decide they want to alter their image. Because then THAT conversation rears it’s head, when we know women are empowering with various hair and skin configurations.

You’re already familiar with this retro milieu — what happens when pride over appearance becomes obsessive and “fake.” One woman tells another woman to stop wearing pigtails because of feminism and we all go totally nutballs. Enough already. Our own instincts are that zero rules are the best tack.