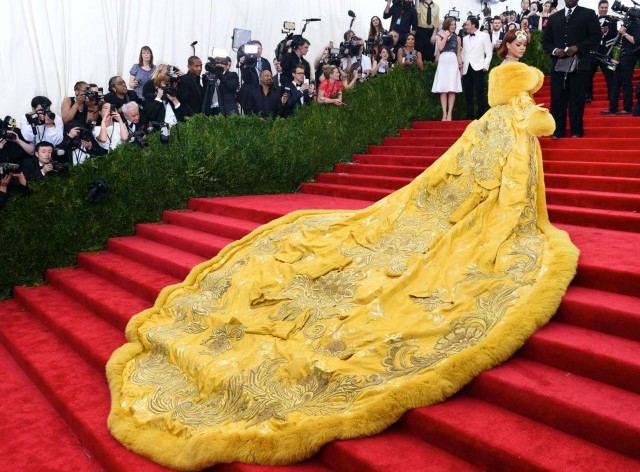 It’s been a full calendar year since Rihanna’s dress was memed into a pepperoni pizza. Since then, she’s gunned down a cell phone, landed at #1 on the Billboard charts, and today, she released $500 pool slides. Hopefully, she will be attending the Met Gala in these slides on Monday beneath something sufficiently swoonworthy.

Stuff you already know: people will be going with brands, the theme is “Manus x Machina: Fashion in an Age of Technology,” and it will be the Mount Olympus of famous faces, but let’s crunch some numbers on this business. Here are some facts about the first Monday in May.

1. 100%: the amount of control Kendall Jenner has on her look
“Its one of those more rare times where she’s 100% about her look,” he says. “I personally love those moments when it comes to models because I get to be a part of something that they have envisaged for themselves and it’s not often they get to do that.”

3. Number of Times Giuliana Rancic will say something ever so slightly off on E!: 3

5. Number of truly legitimate claims by Vogue that the Met Gala made Chinese fashion, embroidered slippers, and that whole “East-meets-West vibe” a streetwear thing: One #impact

6. 50: Number of invitations Ward Durrett and the team started with before they narrowed it down to one paper invitation for the people who already confirmed they were going

7. 45: Number of times they had the benches recovered

8. Percentage of people who Vogue reminded you came last year who will be there this year: “Some,” reportedly according to Vogue

11. Amount of vodka in sprite bottles downed by freaked out fashion assistants: likely, 24

12. 99%: percentage of women who will likely leave the wearable tech to the male virgins

13. Amounts of important collaborations to come out of the strategic color-coded by relevance seating chart: endless