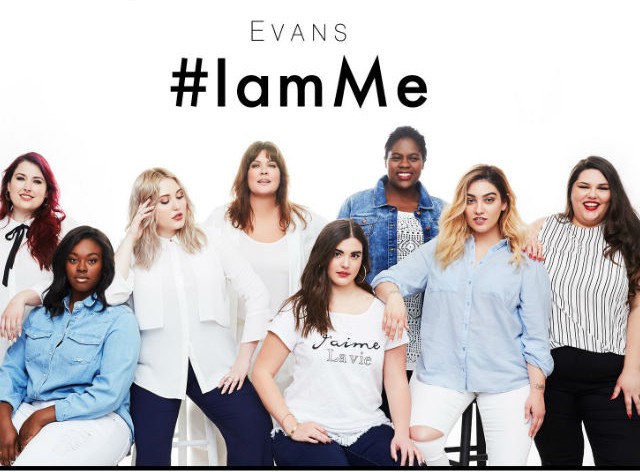 British brand Evans has always geared itself towards curvy woman. Their campaign last year, #StyleHasNoSize didn’t do so hot because of its lack of racial and size diversity. Thankfully, they wised up and released #IamMe, featuring eight women with different shapes, backgrounds and opinions. Obviously the campaign focuses on promoting body positivity and self-love, but it really caught our attention because it is centered on individuality.

The campaign features women who show society not only the range of sizes of curvy women, but that it’s not just models who we can look up to. There are curvy women doing incredible things all over the world, and deserve just as many accolades as the women walking the red carpets and wearing the fine clothes.

By featuring more than the usual curvy women that are in every single campaign, we get to see how fashion has helped women as a whole, and not just from the perspective of the design world. Seeing these women talk about what makes them feel confident proves that it’s not just about diversity in fashion, but feeling the need to see yourself in what’s represented in society.

In reading more about these women, I obviously wanted to know their deals, and how they look so beautiful from every angle. More importantly, I have an immense amount of respect for their cause and strength. Scroll down below to get a sense of each woman featured in the Evans #IamMe campaign.

She is the daughter of famous actor David Hasselhoff but she is also an accomplished model and body activist. In her #IamMe video she says, “I have my bad days, I have my good days, but I don’t feel the need to put a label on who I am. Every girl still wants to feel good in her clothes no matter what shape or size they are. Stay true to yourself and don’t let other dictate your journey.”

Marathon runner and founder of the site fatgirlrunning, there’s really no other word than powerhouse to describe her. She continues to inspire women and fight against the stigma of being a curvy woman who loves exercise, and preaches inclusion. In her #IamMe video she says, “The advice I would give to young people is start a habit of self-care and love. Look in the mirror and say something positive.”

I love this swimsuit so much!! Cannot wait to wear it in Portugal Register with @liketoknow.it www.liketk.it/2gQvu and like this photo to get the link to this straight to you inbox ✉️ #liketkit

We’ve already had serious love for Callie and her column in Marie Claire. And she always has the best style hacks for looking sexy and showing off your figure. In her #IamMe video she says, “It’s not always about putting clothes on, it’s about putting yourself on. I’m not brave for wearing a swimsuit, and I’m not brave for dressing myself in the morning. Fashion is for everybody.”

Songwriter and lead singer of Jess and The Bandits, and a frequent model for curvy brands that make you think, ‘I want her life!’ What’s even cooler about her is that she’s consistently been vocal about body image and refused to conform even if it meant sacrificing popularity. In her #IamMe video she says, “I am trying to have an impact on the industry on the perception of body image. I’m not going to let one opinion define who I am. I know I’m talented, I know I’m good.”

This is my THANKS FOR 11K pic. That time Lingerie Insight showed a sneak peak of the Sculptresse AW16 collection. I was 2 sizes bigger & still fly. #lingerieforall #sexyatanysize #ifyoubelieveitthenitshallbe #pudgesdonthurtpeople #sculptresse

Emerging model Brielle has already been signed to Natural Model Management, and is definitely on the road to success. She’s open and honest about her love of her curves, and makes no apologies. In her #IamMe video she says, “I had an epiphany one day: You need to start loving yourself, you need to start accepting yourself for who you are, and I feel like i have done that.”

Spend less than a minute on her Instagram and you’ll be jealous of how hot she is too. In her #IamMe video she says, “Redefine your own beauty. It’s not just about how you look at yourself in the mirror, it’s about who you are, who you surround yourself with, following your passions and chasing your dreams. That’s what beauty to me is.”

Only way to travel around London to rush to a fashion show in a tut tut !!! @faldofan

As the founder of MILK Management, Anna has been a pioneer in making curvy women part of high fashion campaigns and conversations. The changes that she has made in the industry have certainly made a difference, not to mention she’s a stunner herself! In her #IamMe video she says, “I’m proud of my agency. We are teaching people in the industry that it’s okay to feature women of all shapes, sizes and ages, and they look really amazing and beautiful.”

Modeled for @refinery29's take back the beach editorial. Thank you @lilacperez and the entire team behind it. Wearing a @gabifresh swimsuit from @swimsuitsforall. Photographed by @feaverish. #swimsuit #editorial #refinery29

Designer, blogger, model, body activist…what can’t Nadia do? She has an enormous following because of her bomb style and positive advice for curvy girls alike, and to no surprise, her involvement in this campaign was no different. In her #IamMe video she says, “My original goal was just to have a way to express myself in a positive way–the fashion saved me. It wasn’t necessarily to inspire people. I was just a normal girl who was inspired by fashion and wore what I wanted to.”