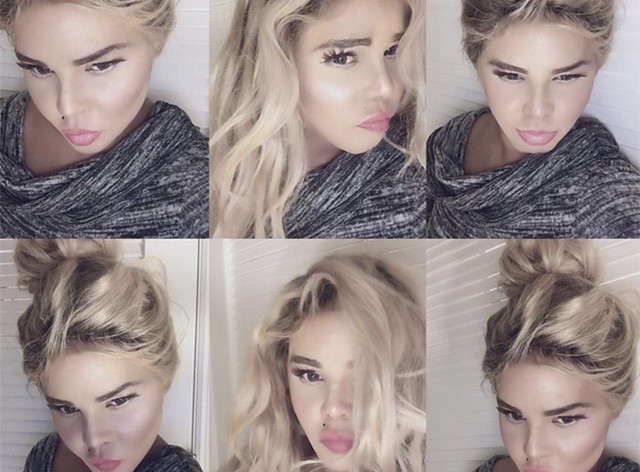 New Identity or Not, Unapologetic Lil’ Kim Revolutionized the Face of Fashion
by Ashley Hoffman | April 25, 2016 at 9:32 AM

Lil’ Kim looks a hella different. Her complexion has evolved over time, but it looks the lightest it’s ever been compared than the Queen Bee we knew, and her hair’s “blonded” with some `dark roots. Predictably, her fans are reacting in one of two ways.

1) Decrying the black erasure of it all: “You destroyed your natural beauty Black Is Beautiful…you made yourself to a doll.shame you didn’t love yourself enough but I won’t judge just pray for you,” one commenter wrote.

2) Concerned for her self-image: “Lil’ Kim needs love, support, understanding. Not shame & judgement,” another commenter who acknowledges she’s a human being wrote.

To people who haven’t been following her, she does look unrecognizable. In 2016, Lil’ Kim looks exactly how she wants to look, and for your run of the mill woman on the internet, that wouldn’t be major news, but for the influential rap legend who gave us “How Many Licks,” long before Nicki Minaj’s “Anaconda,” it has justifiable consequences.

So every possible news outlet isn’t exactly saying her new face is wrong, but they are reporting on how her “shocking new transformation makes her look unrecognizable.” So people are mourning the loss of the “real real.” In the case of Lil’ Kim, who she was at her naturally occurring darker shade gave young women someone to connect to, to identify with, to watch her be the one to put the Range in the Rover. Now, she looks like a lot of other blonde girls, setting off a self-hate debate.

We’ve previously reported on lightening creams still currently sold in stores targeting women of color. Rioter Amanda Thomas wrote, “Essentially, to me, these creams sit on the shelves of CVS screaming “your dark skin is not beautiful.” As far as her hair goes, when we asked Ebonee Davis on consciousness and hair, she said:

Absolutely. Basically, the caption of that photo is about how sometimes, I want to wear a weave that’s down to my butt and within the African American community, we put limitations on ourselves and we try to label each other. The idea that someone is more conscious and aware..when we see someone wear their hair natural, it’s accompanied by images of well-spoken women and that eliminates room for anyone who looks any other way to be considered conscious and aware. It’s a stigma wrapped around us as black women, that if you’re wearing your hair in a weave, you’re emulating European women or you have self-hate, but really, honestly sometimes when I have my hair down to my butt, it just feels good. That doesn’t mean I love my afro any less.

Her current look aside for a moment, Lil’ Kim deserves credit for making an important space for herself as a woman of color. She changed fashion, was totally unapologetic about her sexuality, could rap toe to toe with anyone. But now it’s all, ‘what has she done for you lately?’

With the public, it’s not just the feeling that Lil’ Kim dislikes herself, it’s that she ditched everyone else for the new, preferable, (in her view,) her. This woman has had memes dedicating to ridiculing her different skin tones, so it would be naive to think people will talk about something other than pool Kimberly’s face. But we do hope she has another screw you response to her image critics, because no matter what, her look is her decision. What she accepts and rejects about herself matters, but Lil’ Kim was always and will always be a baddie, no matter what she looks like.