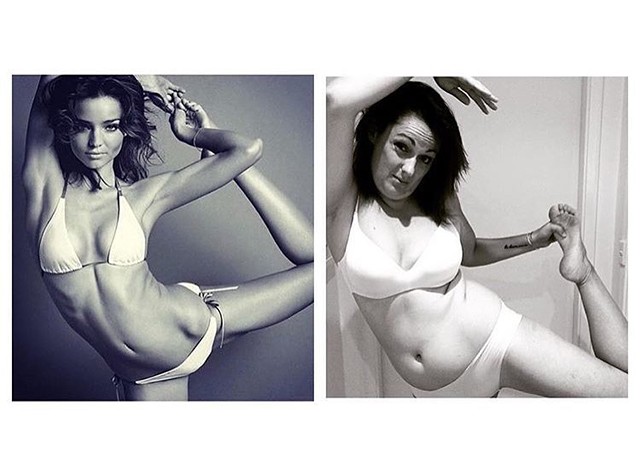 How Many Drinks Does It Take to Fall in a Pool Like Beyoncé? Meet the Viral Woman Behind Those Hilarious Celebrity Copycat Photos
by Ashley Hoffman | April 21, 2016 at 9:23 AM

How is it possible we lived life without Celeste Barber’s awkward expression-centric Instagram comedy? If you don’t know who this fake celebrity turned Internet celebrity is, she just wore a space-themed onesie on the beach in order to realistically recreate that time Alessandra Ambrosio demonstrated how to be at the beach very hotly. Squinting, grimacing, flashing a wry smile and passing out on the lawn, Celeste is making women cackle, and feel better about themselves. The Australian comic scrambles hotness ITSELF into a mess, doing her own versions of poses by Serena Williams, Miranda Kerr, or Nicki Minaj. She told RunwayRiot that a liberal dose of alcohol is involved in the making of all of these homages to Bella Hadid and other famouses.

The funny mom is of course an objectively attractive woman, but her failure to be a Kardashian is ridiculously funny. Making a man wince with her licks and twisting herself into something that is the opposite of whatever Victoria Beckham is doing, Celeste has become a total pro at doing slightly more relatable versions of all that totally attainable flawless status celebrities show you. There’s Miranda Kerr calmly misting herself and her version–freaking out as she rubs cream all over her whole mug and screaming at someone. Kylie Jenner version of being Kylie Jenner: seductively eating hair, Celeste version: seductively eating McDonald’s hash brown.

Obviously this walking disaster is destined for great things. Reached by e-mail, she told RunwayRiot about how many drinks it takes to fall into the pool like Beyoncé, how young women tell her they feel better about themselves when they see her in her underwear, and how pretty soon, she’ll be loaded.

How long did it take to nail your first post — Beyonce defying gravity on the pool?
I was in Bali on a family holiday, and had been doing a bit of day drinking so it took no time at all.

#TBT pull your hair. Put on a full length jacket ( if budget allows ) fall in the water #celestechallengeaccepted #funny #beyonce

As someone who purposely flunks copying famous people, how would you feel about people copying you?
Flunks? I think I’m totally nailing them.

You’re a mother. How has this affected your life? Will your children need to understand that your awkward pretzel-themed Instagram comedy will always be more important?
My kids are a little bit sick of me walking around in ill-fitting underwear asking someone to take a photo of me, but when I buy them a Ferrari each from the money I’ll make, they will understand.

You do have a message – that sexualizing yourself isn’t necessarily empowerment — what do you hope to convey?
There is A LOT of talk about women’s empowerment and what women should do to feel empowered. I like to just get on with it. My theme song is ‘A little less conversation, a little more action’.

This must take a long time. How was it doing that Serena Williams pose?
I was four drinks in, so it was pretty quick.

Do people tell you your pictures make them breathe a sigh of relief?
I get messages from teenage girls and mothers of young girls saying I’ve made them feel better about themselves. It’s super nice.

Are you the type to call nonsense nonsense? What things that women do to look acceptable do you reject?
I call bullsh*t to rich, famous, privileged people portraying their life as accessible to everyone.

Doing things like leg lifts in heels while putting on makeup definitely taps into our weird obsession with stylized perfection. What are your thoughts about these ridiculous poses and standards for women in fashion in general?
I’m happy for people to throw their legs in the air while painting their nails, or sit pant-less on a basket ball, just so long as they are okay with me having a bit of fun with it.

This is a photo I'm recreating of @kourtneykardash. I'm pretty sure we are promoting talent, strength and women's empowerment. Not just sex, as I originally thought. #celestechallengeaccepted #celestebarber #kourtneykardashian #funny #whohaha

What in your past do you think made you of all people want to do this?
I like making people laugh, I always have.

Who’s the funniest celebrity to imitate?
The naked ones.

What makes for the most hilarious celebrity photo in your view?
The bendy ones.

You portray yourself as not the kind of woman to mist herself effortlessly and smile, Miranda Kerr-style. But what are your most shining moments when you felt quite perfect?
I have a really hot husband, so when I look at him, especially if he’s shirtless, I give myself a quiet little high five.

How did you feel about showing your bod off before this venture?
I have gotten where I am because of who I am not how I look, however I’ve always thought I’ve had a pretty banging body.

Who has more pressure to be Instagram popular you or Kim Kardashian?
Kim= billionaire. Celeste= not so much. You do the math.

There’s both power and vulnerability in what you’re doing — are you like your hilarious “hot mess/just a real person” persona online?
I’m a massive Diva. I have monkeys look after my children so I can bathe in coconut oil whilst googling myself, while my hot husband is feeding me organic non-homogenised BPA free quinoa infused chia pods.

It's important for ALL women, especially us mothers to take the time to cleanse and invigorate our skin. We all have the time if we really want it. TAP FOR SOUND. @mirandakerr #celestechallengeaccepted #celestebarber #funny #mirandakerr