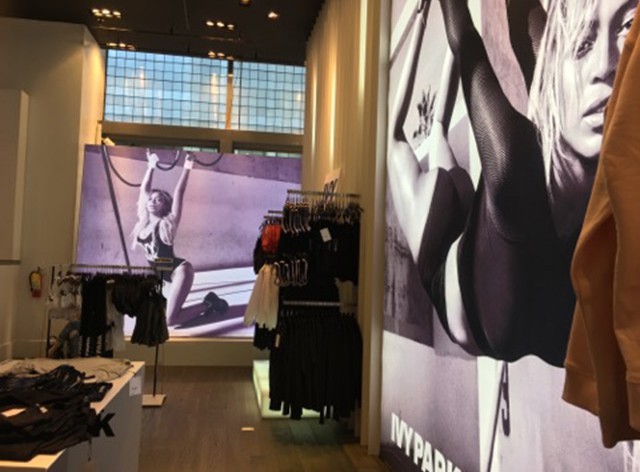 Beyonce thrives on women’s empowerment, and she wants you to look hot at the gym in her gym clothes. Could you really disobey Mrs. Carter and NOT wear this stuff? This piece conveys our speechlessness about seeing air borne Bey thighs, and we’re already all dancing to Sasha Fierce-era in a row at Crunch so why not all suit up alike as her clones as well? The hyercompetent woman fortifies her throne with commercial power, and the campaign looked fire so just like Kevin McCallister buying microwavable dinner, we gave it a whirl.

As the promotional story goes, “it’s a brand inspiring us to stay strong, healthy and happy – no matter what your sporting ability or body shape.” When we called ahead at Topshop in Soho, a personal shopper said they had the full size range in pretty much everything. So we tried on all the merch that we could to see what could work for women who take a “mid-rise dance pant” on the larger side.

Predictably, the store on Broadway was pimping it hard. The Ivy Park display showed Beyonce “treading the line between sweattastic and radiant,” as Vogue put it in so many words plugged into the front of the store, the Ivy Park section was taped off to maximize how special it was, and the stuff including pool slides was all hanging in dressing rooms in case you missed it. 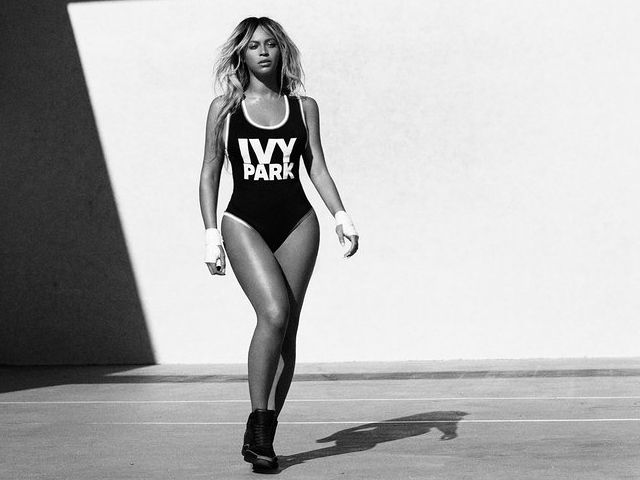 The collection is meant to appeal to a wide variety of body types, though people have been reacting to the fact that a size Large in Ivy Park world is a 12/14. But to those feeling overlooked in the frenzy: there ARE liberally sized pieces worth trying even if more sizes would always be a welcome addition to every brand ever. Sure, some of this stuff seemed to be designed with our straight-size allies, but there’s so much Ivy Park that we definitely recommend trying some of the gear on to see what might work for you. For the most part, the pricing was fair considering it’s well-designed, and we’re talking about Elle-endorsed Beyonce merch. 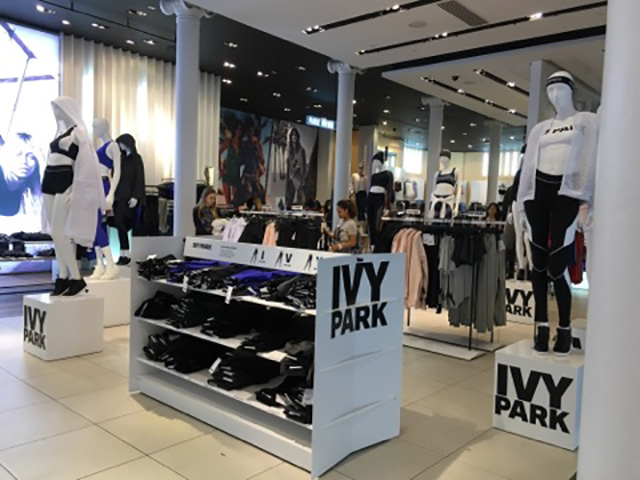 For starters, we are compelled by journalistic integrity to let you know that on RunwayRiot’s visit last night, the overwhelming majority of the looks were only available in XXS and XS for days. It was a fool’s errand to find a Medium in most things. Two Topshop employees told us that whatever they had in the back was likely the same size, but that new sweats were coming in.

STILL the good news is that there were sexy things available in larges and extra larges that could fit size 14’s, 16’s and 18’s. The best bet for women on the larger end of the spectrum were the pants. At the store we toured, there were piles of leggings in all the sizes in countless styles, capri, low-rise, high-rise and the like. The seams on the black leggings didn’t cut us off in weird places, and the ’90s-ish logotastic waist bands didn’t feel restrictive at all. We didn’t try sweating in them, but the tag claims that this stuff soaks it up and dries quickly, so that’s nice.

There’s also the universally sized mesh shirt and jackets if you wanted everyday looks instead of pricy things when you aerobesize yourself. (The windbreakers looked major, but the fabric felt a bit flimsy for the price even for workout clothes.) With some of the tops, just prepare to see them rise up if you’ve got a chest. All of the mesh short shorts and sheer panels on the pants were really sexy, but less viable if you’ve got a booty and want full coverage.

The only really saturated colors that screamed were the royal blue pants, which look like they belong on an ’80s dad on the rack, but when they’re on, somehow they’re not at all garish, and they fit really well. Everything except the jackets had a more expensive feeling hand than Alexander Wang X H&M AND a somewhat similar price point. If you have a booty, we recommend giving the heather grey pants the slip even though the fabric is so delicious. Several people on our visit reported these couldn’t even get over the bum area. 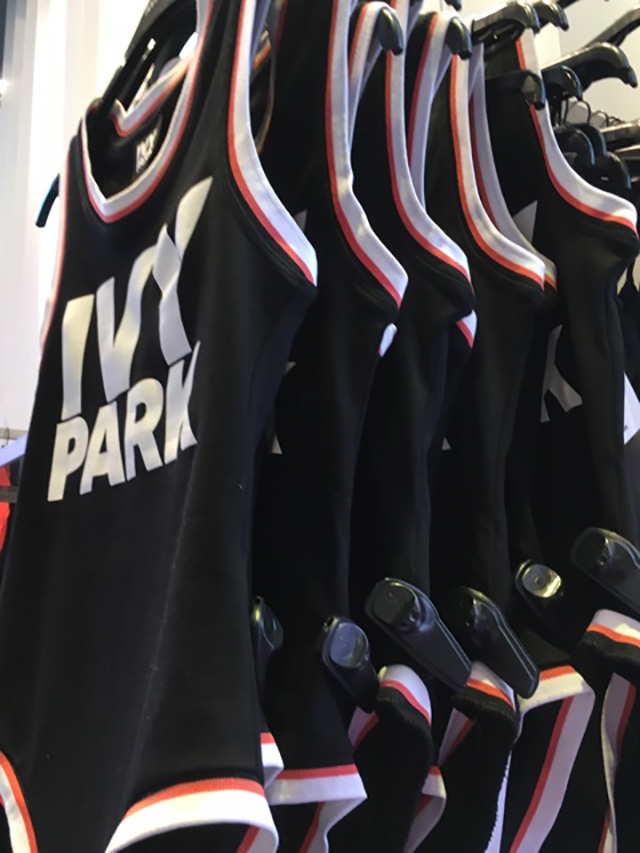 The bodysuits were high-quality and had a ton of give. You could definitely wear these to barre class. They felt breathable, stretchy, so quite doable for different body types who are smaller in on top and larger on the bottom and vice versa. Other one-pieces were a major squeeze to get in to, so obviously you’ll need to get your bod into a Topshop or Nordstrom to see what works.

Of all the performance apparel, the light peach number sweatshirt was minimalist and adorable even if it was the only piece in the whole collection that seemed like an outlier. It looked like something we’d expect Andrea Jipei Lit to make that could sway people who hate sweats. It wasn’t at all ill-fitting on a size 14 and 16 so that one’s a keeper. Bonus: all the hoodies were quite oversized so check ‘em out.

The sports bras ran small even for smaller cup sizes. The watermelon colored one was far too snug if you like breathing. Yes Beyonce’s watermelon is still a thing for Summer 2016 because it should be. She really does know her brand. Several women found there was a ton of spillage, so stick with your main squeeze for that one or prepare to size up. 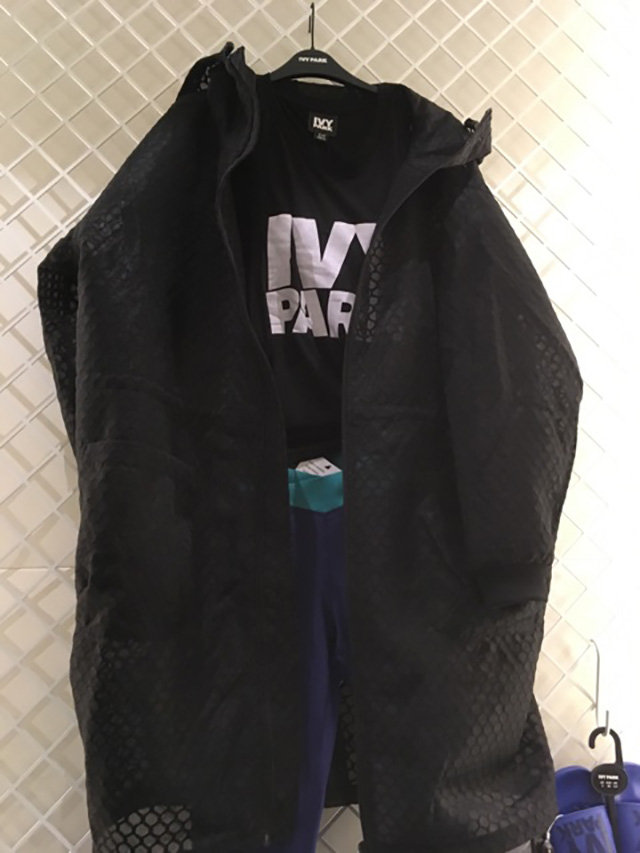 There IS something exciting about having it ready straight away if it’s hard for you to brim with enthusiasm for anything this woman does, even if you may not look EXACTLY like Beyonce in it. If any of this sounds like your bag, enjoy supporting every suburban mom’s dear dear friend Beyonce and her small business.