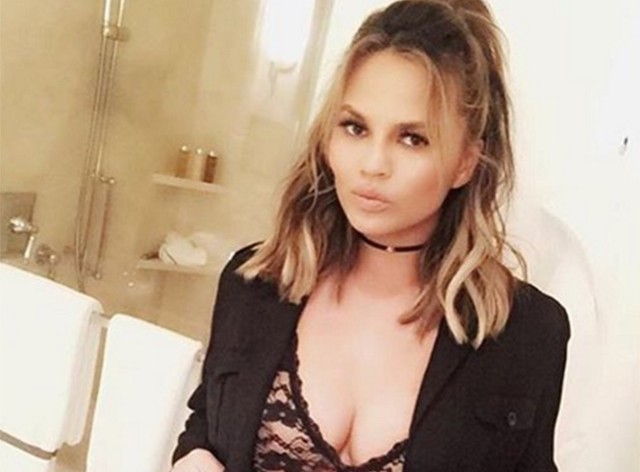 Today, most importantly, is the day that Chrissy Teigen has given birth to lovely Luna Simone Stephens. Another far less important achievement, though it matters for anyone encountering online haterade, are her notable accomplishments in the area of responses to body shamers. If Chrissy Teigen’s responses to body shamers are some of our favorites, it’s because her burns are third-degree level and more evidence that haters are to be ignored or faced head on, with a pointy counterpoint.

Fielding gross comments on the daily that others might let sail by, she tackles them with a quick wit and excellent comic timing. You know, because nothing captivates the public like a woman’s size and she’s always ready. Whether or not you feel haters deserve attention from a goddess living among us who throws down in the kitchen, it makes for thrilling Twitter exchanges. Somehow she finds time in her busy schedule of being a HBIC and a mother to be to come up with some real gems. So far, the score is Teigen 46,329,328 Haters: zero.

Be amazed, and remember haters make you funny. Here’s a look at some of the model’s shining moments from telling a Christina Aguilera fan to shove it to making light of the countless bored people dissecting her body in Sports Illustrated.

February 2016
1. When someone mentioned they disliked her face, because it looked like it was squished by a garage door, this was the response which we shall continue to be amused by forever:

February 2016
2. She posted this Sports Illustrated baetaclar moment, obviously a celebratory moment and the nitpickers started applying the scholarly attention of image-obsessed monks to the picture so this happened:

The @si_swimsuit edition is on stands tooooo-day! (Shoutout to everyone dissecting every little part of my bod in the last comment thread, you're all really wonderful, kind, flawless beauties – I can tell from your pages!! ❤️❤️❤️)

@Shermkitten71 I have a lot of respect for the millions of ppl watching that continue to make our show HUGE and love watching. Your loss.

@Shermkitten71 you are so miserable. do better for your son.

December 2015
4. When she called out people sticking their noses in armpits where they don’t belong. (This was after people freaked out that she had some extra pittage thanks to the HUMAN GROWING INSIDE OF HER.) they decided she should be SUPER CONCERNED. So she addressed the Twitter gynecologists thusly:

December 2015
5. When she told Vogue, she wanted to spread the word that models enjoy eating the good stuff because obviously but people still don’t buy it. “My biggest fear was looking like this book was shoved out by some model who pretends to eat pizza and pokes around at things in the kitchen. I wanted to prove to people that I have a real passion and love for food.”

It's here!!! #CravingsCookbook is done and ready for pre-order! Link in my bio!