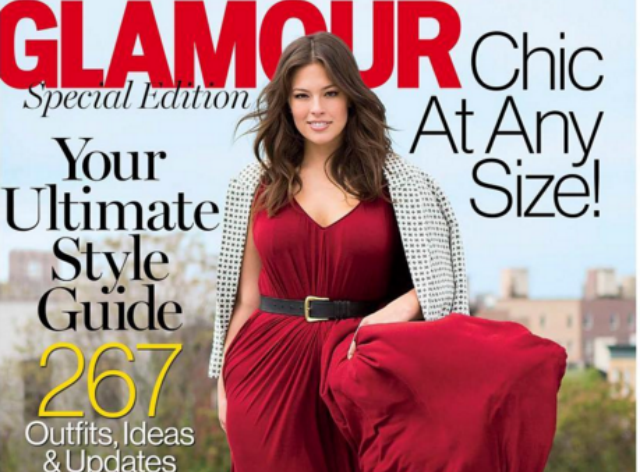 At Least Glamour Is a Finally Mainstream Magazine Celebrating Fashion on Curvy Bodies
by Amanda Thomas | April 19, 2016 at 2:29 PM

Like an inescapable catchy pop tune, magazines still have lasting power. They are propped up on newsstands in supermarkets, splayed across coffee tables, and tucked under the passerby arm. Essentially, it’s practically impossible to avoid seeing the latest celeb on the cover of a magazine. The overexposure of these glossy pages is STILL serious clout. It’s why I applaud Glamour for making an effort and dedicating an entire issue to the mostly underrepresented and often over looked minority in the fashion world; curvier models.

Of course, there are problems with this issue, its price tag is way above Glamour’s usual asking price, their questionable decision to include Amy Schumer at her 6-8 size in the issue without her prior consent, and it begs the question; are advertisements and marketing partnerships the only way to get curvy women in national consumer magazines? These are all issues that need to be tackled, but fingers crossed, will get ironed out soon. Problems aside, it still does not take away the fact that I am gushing over a magazine using its notoriety to celebrate fashion on curvy bodies.

Glamour  has more than 2 million paid subscriptions and their total audience is 10 million. Some of our favorite curvy ladies will gain even more exposure and obviously more fans. More importantly, women will finally get to open a mainstream magazine on a newsstand that doesn’t condemn a curvy body, or challenge people to drop pounds, but instead celebrates it. (We’d love it if they were in the mix all the time though.)

Latina magazine and Essence magazine are testaments to the importance of Glamour’s special edition. These magazines and similar ones recognized the obvious lack of representation and the proliferation of misrepresentation of Latino and black groups and decided to create a space to spotlight and celebrate people of color. Although Glamour did not create a new magazine, they are using their authority to push for more acceptance.

Despite concerns, what I see is women seeing other women like them wearing a bikini at every size, young girls realizing that not every women that is socially deemed “beautiful” is slim. In short, I see progress.  It’s about time I flip through a magazine and see women that look like my friends, my mom, and me.