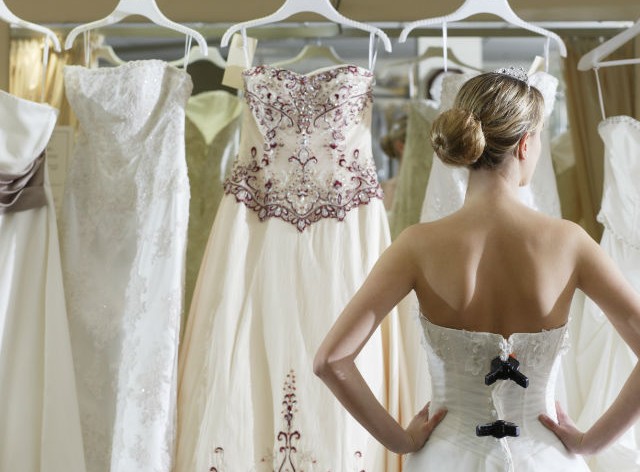 It’s Been Totally Discouraging Trying to Find a Designer Wedding Dress for My Size 16 Friend
by Lindsay Peoples | April 15, 2016 at 3:03 PM

A good friend of mine is getting married next summer. And because I work in fashion, and have a pretty good knowledge of the wedding dress market, for some reason I thought, ‘this will be easy, piece of cake!’ Not the case. She is a size 16, which means that stores basically don’t know what to do with her. At all.

She loves fashion, so for her, David’s Bridal wasn’t even an option. With her wedding a year away, we have more than enough time to find something that needs altering, but stores didn’t seem to even want to help us in the first place. Our first stop was a boutique, which I knew wouldn’t have a lot of options as far as sizing, but I figured it would be a good place to start because she doesn’t want a traditional ball gown.

When we got into the store, we immediately found some inspiration for what she imagined herself in–something special, not a traditional ball gown, something that had unique cuts and details instead of the usual crystal embellishments and lace see through panels. She wanted what every bride wants: to feel like herself on her wedding day. I had assumed that none of the things in the store would fit her perfectly, but looking back, I was a bit naive to think the fitting process would go smoother than it did.

I was in a state of disbelief. Did this saleswoman just deny my friend dresses to try on? What kind of business is that? We’re here to spend thousands of dollars. Why wouldn’t they want her to spend money here?

To keep the peace, I went back to the fitting room and just told her there was some miscommunication about the other dresses, but to try on the two in the fitting room and see how they looked. I didn’t like the idea of giving these stuck up women her money, but the bride’s happiness is more important and if she had a chance of finding her dream dress in that store, I didn’t want to ruin that for her.

Once she tried on one of the dresses, we asked one of the saleswomen to come and clip it on her so she could see how the top looked. She came in, grunted the ENTIRE time as if we asked her to do something so terribly difficult, and then after a couple seconds of adjusting, she said that was the best she could do. We still couldn’t really see the whole bodice, so it was an awkward couple of minutes discussing dress because there wasn’t a whole lot to say

She came in, grunted the ENTIRE time as if we asked her to do something so terribly difficult, and then after a couple seconds of adjusting, she looked defeated, threw her hands up and she said that was the best she could do. We still couldn’t really see the whole bodice, so it was an awkward couple of minutes discussing the dress because there wasn’t a whole lot to say. My friend started to look really worried and we collectively went through stages of looking at the dress, wondering if there was more options, and more than anything desperately wanting this to be a happy experience, but it feeling the exact opposite. I could tell she was disappointed and trying to make the best of the experience so I suggested she take the dress off.

I told my friend that I just felt like that they didn’t really want to help her, and there were so many options out there. She agreed, but she liked the dresses at this store so she wanted to see what styles they had in the catalog. Once she was changed, we went to the front desk to flip through the catalog for other styles, and I could just feel the saleswomen glaring at us. I felt helpless, trying to help my friend, but in such a judgmental environment. I wanted to shield her from the negativity because no bride should have to deal with feeling bad about themselves when shopping for the most important dress of her life.

We decided to go to one more store, this time I told her we should go to a larger store, hoping they’d have more options. Once again, I was wrong. We went to Saks Fifth Avenue, and the section for curvy women was pretty much dull. Is it too much to ask find a fashionable option to wear on your wedding day when curvy? Why, yes it is! I could see my friend was getting discourage so I said I would handle it and go ask someone if they had anything else we weren’t seeing. Her response, “Maybe try the prom section, lots of plus size dresses over there.” Great! Why didn’t I think of that myself? Probably because no one wants to look like a sequined 17-year-old on their wedding day. I told my friend we should just try again another day, maybe it just wasn’t our day.

We went for coffee afterwards and I calmed her worries, but as soon as I left, the horror set in. What if we wouldn’t be able to find a dress? What if all the salespeople we came across were completely incompetent and rude? It felt like an alternate universe, and though I wanted to be in complete denial and just brush it off as a bad day the reality sunk in quickly: the people we came across didn’t think my friend was worthy of having a high-fashion gown in her size. They would rather see a curvy woman in a frumpy dress than actually make an effort to offer extended sizing. We’ve planned on going shopping next weekend, and I’ve already called to see if they offer a wide range of sizing because you obviously have to prep people to dress a curvy woman. Cue the eyeroll.