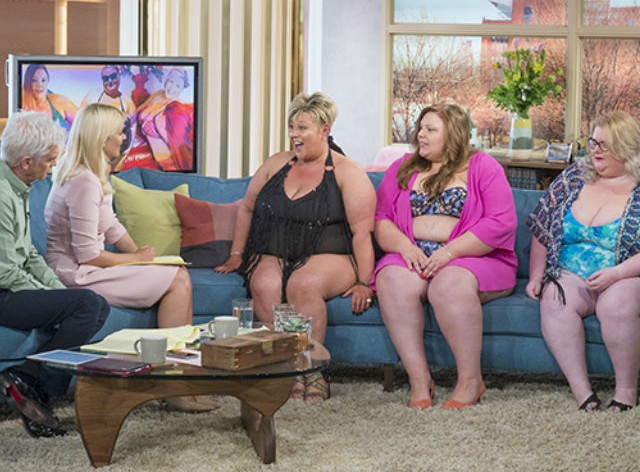 Twitter Should Be Blocking Body Shamers For Their Insignificant Haterade
by Lindsay Peoples | April 12, 2016 at 2:40 PM

Ferne McCann, former star on the show The Only Way Is Essex appeared on the This Morning show today to talk about how online trolls have really affected her and her friend, pop star Cheryl Fernandez-Versini. The TV star told the hosts, “My weight fluctuates and I put on weight last year when I broke my ankle, and I stepped out wearing a silver dress and people weren’t very kind. I always say that I’m not going to let the comments get to me, but they do. It hurts. There is a lot of pressure to look good. We need to embrace being positive and confident with our bodies.” Yes sometimes you can laugh it off and say to yourself ‘this person probably still lives with his mom in the basement,’ but other times, it’s really hard not to internalize the things people say to you and want to slap them through the phone.

McCann was joined by curvy models in swimwear to show the audience that obviously you don’t have to be a certain size to wear a swimsuit. She also went on to say, “This is something I feel passionately about. I think it should be illegal, body shaming. They are sitting behind their keyboards. They don’t know… celebrity or not, what that person is feeling.”

And while making body shaming illegal is a bit extreme and law enforcement would struggle to even make it a law, it does make you wonder what would happen if there were some type of repercussion or if internet body shamers had to take responsibility for their actions. I doubt that people would be so eager and bold to trash other people online if there was someone watching comments. I can guarantee you that the world would be a very different place if people’s social media accounts got temporarily blocked or reported every time they took part in body shaming online.

Kudos to these 3 brave,beautiful ladies who stepped out in their bikinis on @itvthismorning shaming the body shamers pic.twitter.com/pieGHOVo1e

Social media is littered with an unrealistic body image of women. So I think it's important 4 women 2 embrace their body shape! Loud & proud

The reality of it is that body shamers aren’t going away—people will continue to feel empowered behind a screen to say anything that they want because they feel like no one will notice, no one cares, and no one will be offended. So I say let’s continue to call out the haters, but let them keep that negative energy to themselves.