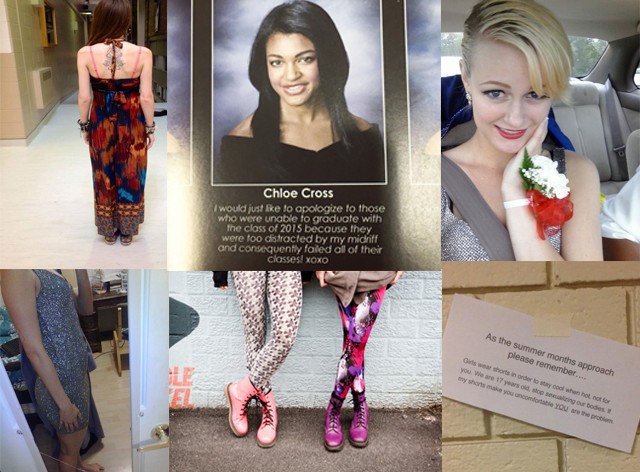 It’s springtime, and Erykah Badu, a smart woman who makes seriously beautiful music has written a nuanced, long Twitter statement today in response to an article about how young women and dress codes. In short, she believes that young women should be aware of how they’re naturally attractive to men in this imbalanced society when they wear revealing skirts, and so they should dress accordingly with more modest attire. If she were in charge, she’d make the school uniforms knee-length because of fairness. Naturally, Twitter does not like this. Wherever this sits with you, we’re all for young women defending their right to wear whatever they damn well please.

Throughout history, schools have removed women from class for wearing things they decide are “sexually distracting.” As a young woman who is showing too much of her body takes a toll on everyone’s perception, inevitably, a young man’s area for absorbing information decreases by 75, sometimes 95 percent.

Of course, there was a time when women wearing pants was an act of rebellion, but lately it’s leggings and spaghetti straps schools are after. You know the drill. It’s all a young woman’s fault for enticing men away from the Powerpoint presentations about the Manifest Destiny with her bare shoulders. Girls are just way too naked for information absorption to take place! Yes, in these ridiculous times we live in, young female students are routinely reduced to terror-level threats, sexually humiliated, and removed from instruction because of their clothing.

“You’re showing too much skin,” school officials say, or “it’s keeping the boys from their education.”

When a female student gets disciplined over some shorts, she can just fall in line OR she can publicly reject sexist dress codes with a baddass response because an outfit has nothing to do with social problems like sexual aggression or academic failure. From defiant handwritten letters to fiery blog posts, here are some of the best responses to sexist dress codes in the recent news.

May 2015
1. Lauren Wiggins vs. Harrison Trimble High School in Canada

Wiggins, who was turning 18, got detention for wearing a halter dress that revealed her bra straps, her upper back with a tattoo, and her love of streaky colorful prints. Detecting bullshit, she wrote this on her Facebook page.

Today I received a detention because the outfit I am wearing is considered inappropriate and a sexual distraction to the young men in my school. Enough is enough. I’m tired of the unjust standards that we as women are held up to. I’m tired of the discrimination against our bodies, and I’m absolutely fed up with comments that make us feel like we can’t be comfortable without being provocative. It’s time to change the worlds mindset. Now.

Wiggins also sent a handwritten letter to the vice principal that struck the perfect combination of common sense and sass.

If you are truly so concerned that a boy in this school will get distracted by my upper back and shoulders, then he needs to be sent home and practice self-control.

Wigfall got suspended for wearing the snazzy prom dress her mother designed for her because the school decided it was too revealing. Allegedly, the assistant principal told her: “You have more boobs than other girls. ‘The other girls have less to show.'” So to recap, long-sleeved, lacy prom dresses in ravishing red are totes appropriate unless you have boobs.

The school reversed the suspension because the mom wasn’t having it. Was there residual emotional scarring after justice was served for this girl? Maybe! But really, guys, what’s a helpful cup size reminder between two besties? (One being the school official and one being the impressionable young teen.)

I couldn’t believe it. I don’t see anything wrong with that dress. What do they want her to wear, a turtleneck?

YOU KNOW YOU’VE SAID THAT IF YOU HAVE BOOBS.

After years of her school’s disproportionate dress code enforcement, Cross slid one final message under the wire before she blew that Popsicle stand. It was about how ridiculous it is to sexualize female students all under the guise of saving young dudes from ruin. And it was printed, in the yearbook, for everyone to drool over, because she’s slick like that. The xoxo sign off is just too much perfection. Very funny, and very palatable. This is the best way to say “later, nerds.” Bomb, dropped.

Cross told Yahoo that as funny as it is, she was dead serious about making people think. Remember that time there was a slice of skin showing between your shirt and your sweatpants? Totally sincere regrets for all the dudes who failed out of school because you did that.

This Anonymous poster from a prep school girl kicks off like your average anti-shorts reminder to suffer in the hot hot classroom because your body is obscene. But no, it’s a totally punk message from a seventeen-year-old cutting the school officials off before they even START sexualizing girls.

6. May 2014
Clair Schauldt vs. Richmond Homeschool

According to Schauldt, a prom organizer cornered her at prom because of her “inappropriate” dress. But Shauldt proved that the dress complied with the dress codes “fingertip length policy.” Later, that same organizer told her that some of the dads who were chaperoning had complained that her dancing was too provocative, and that she was going to cause the young men at the prom to think impure thoughts, so she got kicked out. Schauldt then penned an epic blog post entitled “Fuck the Patriarchy” about it. This is how a boss TEACHES THE ADULTS.

I was told that the way I dressed and moved my body was causing men to think inappropriately about me, implying that it is my responsibility to control other people’s thoughts and drives. I’m not responsible for some perverted 45-year-old dad lusting after me because I have a sparkly dress on and a big a$$ for a teenager. And if you think I am, then maybe you’re part of the problem.

Girls were sent home for wearing leggings and consequently endangering the bright futures of boys every turn. In a letter to the Haven administration, parents said this:

Not being able to wear leggings because it’s ‘too distracting for boys’ is giving us the impression we should be guilty for what guys do.