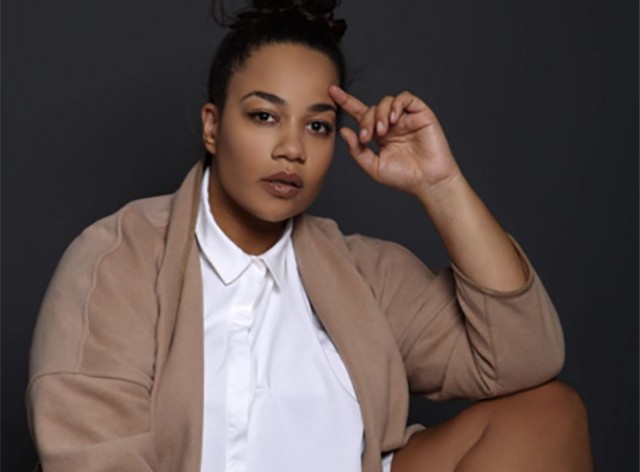 How Model Olivia Campbell Triumphed Over Everyone Who Said ‘How Dare You Be Fat and Happy’
by Ashley Hoffman | April 11, 2016 at 11:31 AM

If there a bouquet of flowers for top to bottom truth bomb drops, it is owed to Olivia Campbell for her turn on StyleLikeU released today.

Campbell, who this writer has previously fangirled over, overflows with the pain she wrenches out for you to witness, and it boils over in cathartic waves in this story of her unbreakable confidence.

So extreme was her background that it makes the way she has hacked away at her self-hating tendencies all the more impressive. When she was incredibly young, she endured hate speech and was routinely sexually assaulted, and when you’re in a place like that you can escape or you can physically leave. Her palpable individual strength over her past circumstances is jarring. She needed it in the sort of home situation where other people pushed her into dark spaces — bins — against her will.

Now, she talks about why she’s sexy and owns her body, and how her confidence now acts as a shield that’s discomfiting to a lot of people. Evidently, she encounters a good deal of “how dare you be ‘fat’ and happy.” (She only tried losing weight because she was told she needed to.) With adult Olivia, there’s plenty of sass to be had, as she currently struts for the mirror and loves what she sees. She says stuff to her reflection like, “damn, god, amazing, wow, look at that roll,” but as she puts it “life is a daily battle.”

She had to claw with her fingernails to get here, as we learn from the difference between how she used to live life as the target of abuse, but now she is irreversibly confident. And then she retreats again to the darkness. Perhaps most movingly, her poetry is when she talks about how she has poured all of her energy into being the best mother she can be.

It’s a video that acknowledges truly unbearable times and Olivia’s utter refusal to buy that she can’t get out from the grip of her own depression and grief. Watch below and let us know what you think.