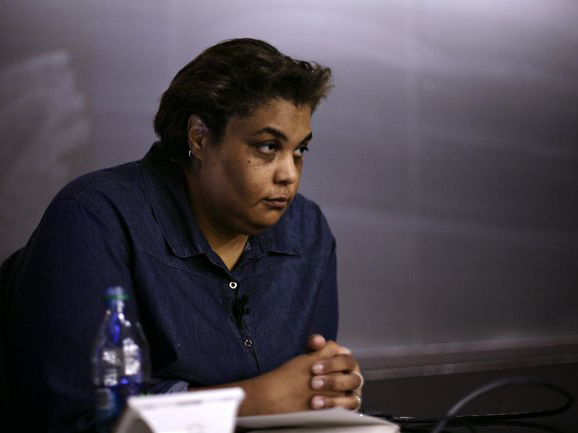 Roxane Gay Gracefully Thanked Her Body Shamer for Reminding Her About Her Size
by Ashley Hoffman | April 8, 2016 at 11:21 AM

Roxane Gay, is the acclaimed feminist scribe who water birthed the line “abandon the cultural myth that all female friendships must be b*tchy, toxic, or competitive. This myth is like heels and purses — pretty but designed to SLOW women down.” She also once communicated with Ina Garten, has a new memoir, Hunger, and has spoken out about the lack of fly threads available for her sexy dates, of which she has planned many.

Gay has one seriously deeply pleasureable Twitter presence, and yesterday when she shared that she was feeling pretty depleted by the trying ride of the past two months, one worrisome individual decided to tell her about what she’s been eating. Here’s how that ish went down.

I am soul tired. It has been a rough couple months.

Didn't stop ya from rolling ya ass to a buffet. #AllRollsMatter https://t.co/s8fjhJFaPd

Right. Thanks for reminding me that I'm fat fat fat. Clearly I don't deserve the slightest consideration as such. https://t.co/31JcJPXPI7

We know what Roxane deserves, and that’s the world on a platter, literary awards, and a lunch date with Ina where they both wear chambray. Consider yourself thanked, Butch Cassidy, as most women have no clue about their own health, appearance, or their own body’s needs, but of course, you do. Cheers. If there’s one upside to the internet, it’s that magical women can show you they’re unashamed of the fact that other people act shamefully. And remember OPO (other people’s opinions,) about your health are none of your beeswax, much like whatever happens in Vegas, we don’t know, we’ve never been.

We’re filing this one under things that would probably make Rihanna roll her eyes.