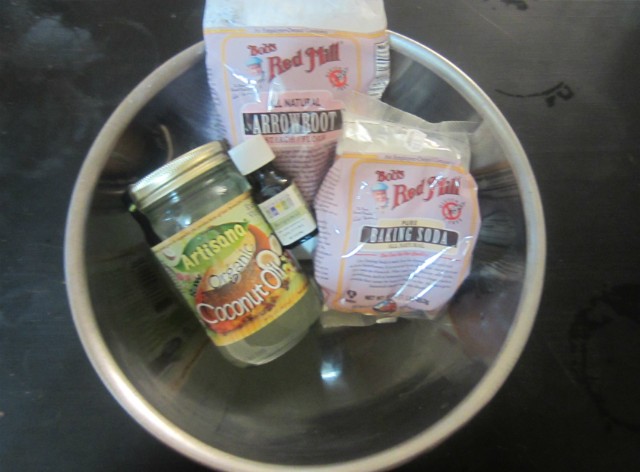 I Tested My Own DIY Homemade Deodorant to the Gym, and It’s Actually Effective
by Ashley Hoffman | April 6, 2016 at 1:45 PM

My boyfriend recently told me that my Mitchum deodorant stick was going to give me Alzheimers. “You need to use Tom’s because I’m not taking care of you when your mind goes,” he said in that direct way I’m so in love with. (People are worried that the aluminium in it causes diseases. Evidently there’s not sufficient evidence to conclude that anti-perspirant leads to Alzheimer’s or breast cancer though.)

I tried long-lasting Men’s Mountain Spring by Tom’s, because I didn’t want to aluminum myself to an early death. But it didn’t work for me. It’s either that a) Tom’s is just not strong enough for my fist-pumping World Cup habits or b) Tom’s is something you rub on yourself to awaken the natural friend-repelling scents within.

The time I did use it, I fell prey to the sneaky charms of the buttery smell that only the work of Mother Nature in Maine can create. It smells good at first, but it helps you reek like a barn animal not that much later. By the afternoon, I soon found myself implausibly annoyed that someone gross was near me, except I was that person. It was me. Me and my non-working deodorant.

Even though Tom’s would help me alienate the people with clipboards on the street, I had gone back to rubbing aluminium under my arms on a daily basis, when I read a post about DIY natural deodorant. Here’s what the post said:

“So what to do? Sweat like a horse or get Alzheimers and breast cancer? Is there no other option? Fortunately, there is! Unfortunately, it takes more time than going to the store, but it lasts a lot longer and is a whole lot healthier! In my pursuit of healthy armpits, I finally found a recipe that works and is still healthy.”

I followed the four-ingredient recipe from Wellness Mama, and spent thirty dollars on arrowroot, coconut oil, and baking powder from a health food store. The employee/chef/cosmetologist/baker was more excited than I was about the whole prospect. “Good for you,” she said, and she helped me settle on Bergamot as an essential oil.

Here’s how you make it:

Step 2: Shake in your essential oil of choice.

Making homemade deodorant will mean you’ll need to turn your kitchen table into the final scene of Scarface, but in ten minutes, you will have gloopy anti-perspirant the color and texture of stale milk.

I scooped a tablespoon full into each armpit. The stuff went on easily, and I actually loved the scent. That day, I wore a Chambray dress in 98 degree weather. At work, two writers in the Styleite family got in close for a sniff. “I don’t think you smell bad,” one told me.

I spent the day sitting down at a laptop, and I knew this sedentary phase would have to end for this experiment to yield any real results.

By the time I left, a tropical storm hit New York. I was soaked, and my chambray turned to navy. I thought I looked like Britney Spears in the ‘Stronger’ video, but I looked more like the girl from The Ring.

Maybe a normal person would just kick back with wine and ramen for the night, what with the glow of the flood warning on my iPhone and all. But the physical evidence that I still smelled good made it clear that I wasn’t testing my concoction. I couldn’t waste any more time.

I jumped over a dozen puddles to the gym for a full-body workout with tons of arm stuff. There was the 200 feet of rope I pulled upside down on the frightful looking Marpo machine, the twenty minutes on the rowing machine, the twists I willed my body into with TRX suspension bands, and the two giant kettlebells I swung in between my legs and over my head. When my arms were finally jelly, I was dripping with sweat. I figured I’d crunched my way to the conclusion that I would need Alzheimers deodorant because human decency.

So it was with both shock and delight that I discovered that my creamy paste actually worked. I ran my hands under my arms Superstar style, and I was sweaty. Eight hours later, I, the natural deodorant-averse skeptic, had zero B.O., and I made my boyfriend really get in there. I’m going to keep using it. It’s cheaper in the long run, and I’m staving off lunacy. Screw you Tom, I found a loophole from a someone who does DIY things, and now I’ll always be able to recognize my loved ones by face. The only problem with homemade deodorant is that it’s homemade deodorant, but it works.